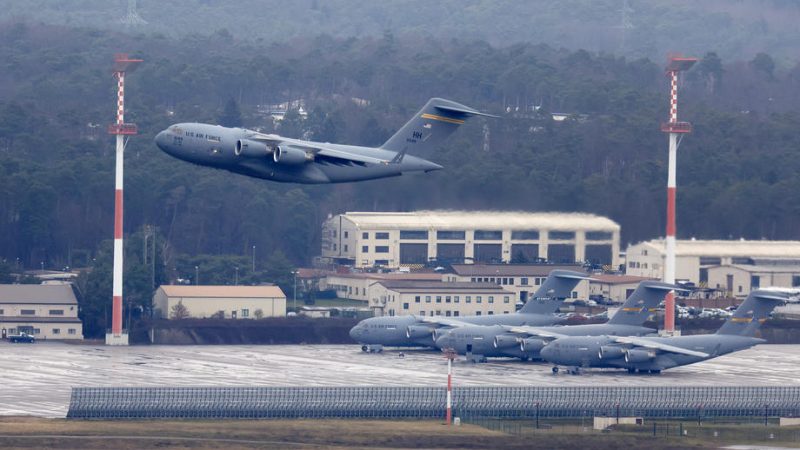 A US military aircraft takes off at the US Ramstein Air Base, in Ramstein, Germany, 4 February 2022. Due to the war situation between Ukraine and Russia, the US military is moving troops to Germany and Eastern Europe. The Ramstein US Air Base is a military airfield of the United States Air Force and headquarters of US Air Forces in Europe. [EPA-EFE/RONALD WITTEK]

US Defence Secretary Lloyd Austin will host Ukraine-focused defence talks with allies at Ramstein Air Base in Germany next week, the Pentagon said on Thursday (21 April) as Russia continues to increase its armed forces as part of its eastern offensive in the Donbas.

The announcement comes as Ukrainian President Volodymyr Zelenskyy has repeatedly appealed to the West that his war-ravaged country needed more heavy weapons to defend itself from Russia’s invasion that threatened Ukraine’s very survival, and he asked Western nations to impose further sanctions.

“The goal is to bring together stakeholders from all around the world for a series of meetings on the latest (Ukrainian) defence needs and (…) ensuring that Ukraine’s enduring security and sovereignty over the long-term is respected and developed,” Pentagon spokesman John Kirby said of the meeting planned for next Tuesday (26 April).

EURACTIV understands this would also include initial considerations about Ukraine’s defence needs beyond the current war.

“We think it’s time to have that discussion as well,” Kirby confirmed to reporters.

The main focus, however, is likely to be on how to ramp up further military support for Ukraine in the short term.

Earlier on Thursday (21 April), the US government announced $800 million in new military aid for Kyiv, including fighter jet parts, artillery and drones. Washington has pledged or delivered arms worth more than $3.3 billion to Ukraine since the start of Russia’s war of aggression.

The US and its NATO allies have ramped up the delivery of tanks, helicopters, and other weaponry to Ukraine as the country’s forces prepare for large-scale battles against Russian troops in the Donbas region of eastern Ukraine.

Increasingly, they are also sending heavy weapons to Ukraine, but not Germany.

German Chancellor Olaf Scholz is facing growing criticism at home and Western allies for his government’s hesitation and failure to deliver heavy weapons to Ukraine to help it fend off Russian attacks, even as other Western allies step up shipments.

Estonian Prime Minister Kaja Kallas posted a chart this week which spelt out the support provided by a range of countries to Ukraine, taking account of their economic output.

Unlike other Western allies, Berlin did not supply weapons to Ukraine before Russia’s invasion on 24 February and even blocked allies from sending German-origin military equipment, given a long-standing policy of not exporting arms to war zones.

Scholz this week pledged the delivery of anti-tank and anti-aircraft weapons from German military stocks, which he described however as “defensive weapons”. 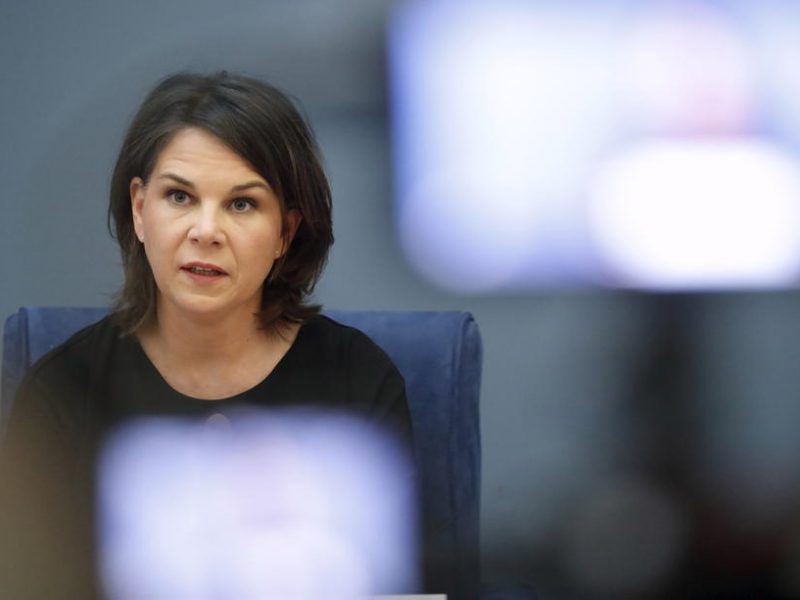 While the government refuses to detail what it has actually sent so far, the Bundeswehr has sent a total of €83 million worth of stocks, according to German Defence Minister Christine Lambrecht.

The Ukraine talks to Ramstein Air Base in southwestern Germany, the largest American military base outside the US, are seen by observers also as an opportunity to push Berlin to more commitments.

US officials say Western weapons deliveries and equipment conquests on the ground meanwhile have started to result in arms advantages for Ukraine.

According to the military blog Oryx, which has had one of the most comprehensive tracking based on verified and geolocated photos and videos on social networks, the Russian troops have lost at least 481 tanks by Thursday (21 April) evening, with 269 destroyed and 212 captured by the Ukrainian opponents.

On the Ukrainian side, however, 52 tanks are said to have been destroyed and 73 passed into Russian control.

Kirby did not say how many allies would participate in the talks. But not only NATO countries would be invited, he added.

Later on Friday (22 April), in a separate briefing, he confirmed to reporters that more than 20 nations out of 40 invited have already confirmed their participation, with more confirmations expected to come in.

This comes after a NATO foreign minister meeting earlier this month saw consultations with a broad range of non-NATO members such as Sweden, Finland, Ukraine, Georgia, the EU as well as the Asia-Pacific partners.