On Friday (5 June), the Wall Street Journal reported that the Trump administration had ordered the reduction of the number of US soldiers stationed in Germany by 9,500 to 25,000.

NATO officials have not yet commented on Washington’s withdrawal plan.

It is the latest in a series of US military decisions that have caught allies off-guard in recent months, including the US troop withdrawal from Northern Syria and the targeted killing of an Iranian general, Qassem Soleimani, which forced NATO to suspend its training mission in Iraq earlier this year.

Currently there are 34,674 US military personnel stationed in Germany, including 20,774 from the Army and 12,980 from the Air Force, according to a Pentagon deployment report.

There are more US soldiers stationed in Germany than in any other European country, and US military infrastructure in Stuttgart, Germany had been a key hub for securing missions in Afghanistan and Iraq.

Germany’s relationship with the United States is “complicated”, Foreign Minister Heiko Maas said in a newspaper interview, regretting the planned withdrawal of US soldiers from Germany.

“Should it come to the withdrawal of part of the US troops, we take note of this. We appreciate the cooperation with the US forces that has developed over decades. It is in the interests of both our countries,” Maas told Bild am Sonntag.

Maas acknowledged problems in Germany’s relationship with the United States, saying: “We are close partners in the transatlantic alliance. But: It is complicated.”

An US official quoted by Reuters on Friday the troops move was the result of months of work by the top US military officer, General Mark Milley, and had nothing to do with tensions between Trump and Merkel, who thwarted Trump’s plan to host a G7 meeting this month.

“The plans once again show that the Trump administration is neglecting an elementary leadership task: the involvement of alliance partners in decision-making processes,” Johann Wadephul, foreign policy spokesman for the CDU/CSU parliamentary group, told Reuters.

All NATO partners benefited from the cohesion of the alliance, and only Russia and China gain from discord, Wadephul said, adding: “This should be given more attention in Washington”.

Wadephul also spoke of a “further wake-up call” to Europeans to position themselves better in terms of security policy.

“Such a decision by the American president may seriously affect relations between Germany and the US,” said the German government coordinator for transatlantic cooperation, Peter Beyer (CDU), quoted by German press agency dpa.

Completely different reactions came from Warsaw, in which less than 5,000 US troops are currently stationed.

Polish Prime Minister Mateusz Morawiecki said on Saturday (8 June) he hoped that some of the US troops that are set to be removed from Germany will be reassigned to Poland.

“I deeply hope that as a result of the many talks that we had … part of the troops based today in Germany which are being removed by the United States … will indeed come to Poland,” Morawiecki said.

“The decision is now on the US side,” he added.

Since the conservative PiS (Law and Justice) government came to power, Poland had presented a vast plan to modernise its army and revived the calls for a permanent US base in the country with “boots on the ground”.

Since then, the plan, dubbed ‘Fort Trump’, is an unabashed attempt to entice Trump into beefing up US military presence in Poland, a long-running hope for a permanent major US military base to help counter potential Russian aggression.

Last month, some US officials had also been eyeing Poland as a new home to the US nuclear arsenal in Europe, after German Social Democrats reopened the debate about whether the country should remain under Washington’s protective nuclear umbrella. 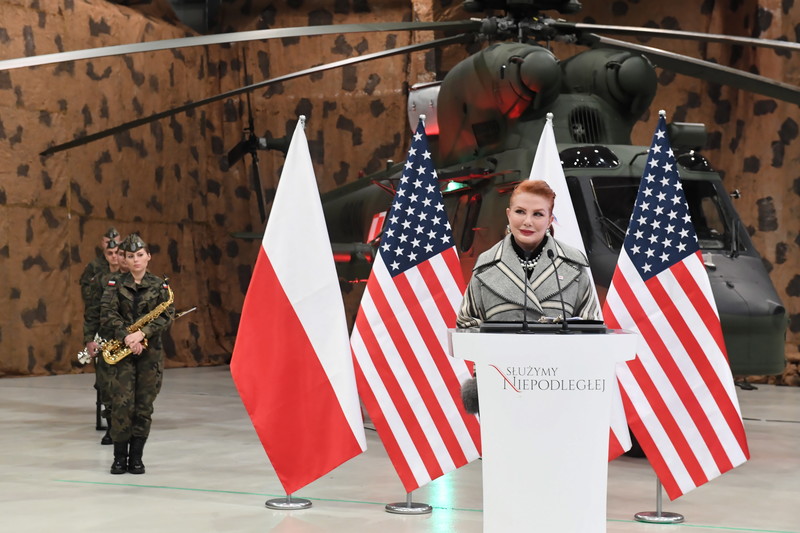 US Ambassador to Poland, Georgette Mosbacher, upped the ante and suggested that in the event that Germany should attempt to “reduce its nuclear potential and weaken NATO”, “perhaps Poland, which pays its fair share, understands the risks and is on NATO’s Eastern Flank, could house the capabilities”.