Washington has talked for some time of relocating US troops from Germany because of its annoyance with Berlin’s military spending shortfalls. But President Donald Trump’s upcoming visit to Poland in September could give it another twist.

With a total of 35,000, Germany hosts the most US troops in Europe. But in recent months, US diplomats have been debating the possible transfer of some of those stationed in Germany to Europe’s East, leaving Berlin worrying about the already strained transatlantic relations.

“The presence of US troops in Germany is a mutual security interest. I have no signals that the United States believes otherwise,” German Defence Minister Annegret Kramp-Karrenbauer told German daily Bild am Sonntag in reaction to the announcements.

At the 2014 Wales summit, NATO members pledged to reach a target of 2% GDP in defence expenditure by 2024. However, in May 2018, then German Defence Minister Ursula von der Leyen indicated that Germany would only commit to 1.5% GDP by 2024.

But despite Kramp-Karrenbauer’s assurances on NATO targets, a recent medium-term budget draft proposal by Finance Minister Olaf Scholz (SPD) has poured cold water over the commitments made to NATO as it foresees at best only 1.26% as of 2023.

The issue has strained the governing coalition of Christian and Social Democrats, as the latter do not want to increase the Bundeswehr’s budget.

“The Americans are right – Germany should spend more. We should actually pay to have a better equipped Bundeswehr as we spent too little for too long and now there is a growing budget and a lot of movement to step up defence spending,” Henning Riecke, a transatlantic security expert at the German Council on Foreign Relations (DGAP), told EURACTIV.

For him, the matter is “an uphill battle as the German public is not crazy about the Bundeswehr and defence spending when you still have other policy tasks to fulfil with regard to education or social questions.”

“Especially now, when Social Democrats and other critics of more defence spending can always link that to Trump’s demands and say ‘Are we going to be the poodle of this president?’.”

While previous US administrations have also been critical of Germany’s spending, the prospect of (partial) relocation of US troops from Germany to Poland has become more realistic since Trump took office.

Earlier this month, US Ambassador in Warsaw, Georgette Mosbacher, restarted the relocation debate.

Poland meets its 2% of GDP spending obligation towards NATO. Germany does not. We would welcome American troops in Germany to come to Poland.

In line with a declaration signed in June between Presidents Trump and Andrzej Duda, Poland expects Washington to increase its military presence in the country from 4,500 to 5,500.

As Duda visited Washington, he suggested the creation of a “Fort Trump” in Poland, a “first-class military facility” for which Warsaw would bear the costs.

But the Trump administration, however, does not intend to send additional forces to Europe, but rather transfer troops that are already stationed on the continent.

US ambassador to Germany, Richard Grenell, last week reiterated that such demands are rightly put forward.

“It’s really insulting to expect that an American taxpayer will continue to maintain over 50,000 Americans (soldiers and civil servants) in Germany, while Germany is using the trade surplus money for its own purposes,” Grenell said in an interview with German news agency dpa.

For Riecke, the transatlantic security expert, those comments represent a “slap-in-the-face option” for the Americans to induce the Germans to spend more for defence.

“Trump was trying to signal to the Eastern Europeans, to the Poles specifically, that his administration takes their security seriously. But he was also signalling to the Germans ‘If you don’t don’t pay enough and if you don’t live up to your commitments, we can go elsewhere,'” Riecke told EURACTIV.

Warsaw recently made further efforts to tie itself closer to Washington and promote the country as an alternative location – including plans to order 32 Lockheed F-35 fighter jets from the US and an invitation for Trump to attend the marking the 80th anniversary of the Nazi invasion of Poland.

However, the reactions of the Polish government had been rather cautious.

“We do not see it as taking soldiers away from Germany,” Foreign Minister Jacek Czaputowicz said in an interview with the newspaper Rzeczpospolita when asked if new troops would come from Germany.

“It is up to the Americans to decide. For us, American troops present in Germany play a very positive role. Their presence … strengthens our common defence,” he said.

Technical details of the new US deployment in Poland, such as the type of forces and their location, should be confirmed during Trump’s upcoming visit to Poland, Czaputowicz said.

“Poland would, of course, welcome more US troops on its soil and agrees with the United States on the defence spending issue within NATO, but the Polish government’s reaction to those recent tweets and remarks has been rather cautious,” security expert Artur Kacprzyk from the Polish Institute of International Affairs (PISM) told EURACTIV.

According to Kacprzyk, the Polish position foresees that while troops deployed in Poland and in the Baltic States are key for deterrence, units based in Germany are important too, as they could reinforce the eastern flank in a conflict.

“If the US decided to relocate 1,000 soldiers on a permanent basis to Poland, this would still leave more than 30,000 US troops in Germany – it wouldn’t impact the US footprint in Germany that much,” Kacprzyk told EURACTIV and added:

“It would, however, be unrealistic for the US to move the majority of its forces based in Germany to Poland or at least to do it quickly, partly because it would require a lot of time and funds”. 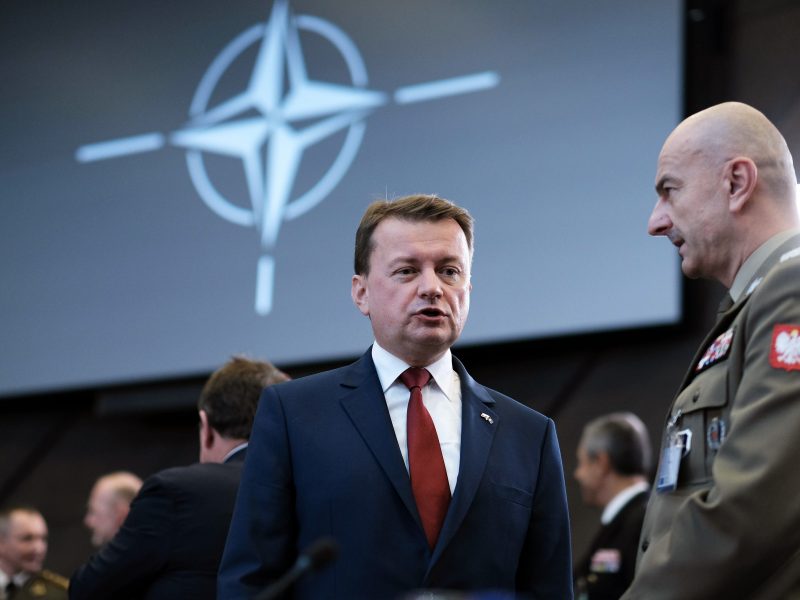 Poland’s Defence Minister Mariusz Blaszczak announced on Thursday (28 February) that by 2026 Warsaw would spend around €43 billion euros on modernising the Polish armed forces.

Germany is the second-largest foreign location of the US armed forces after Japan, and giving it up completely could not be compensated quickly, experts suggest.

“As there is a need for more troops in Eastern Europe, we will possibly lose some forces here, which would be not bad for Germany as such, but it would be bad for the local municipalities who rely on the Americans being there,” Riecke told EURACTIV.

But he said the general idea of a major relocation of US troops was “a pretty empty threat.”

“It is in the US interest to use the infrastructure in Germany for their two Headquarters and other installations,” Riecke said.

On top of the 35,000 troops, there are 17,000 American and 12,000 German civilians employed by US troops. Many more jobs depend on American forces with the US Africa Command in Stuttgart and the Ramstein Air Base in structurally weak Rhineland-Palatinate.