With war at its doorstep, EU agrees to move on defence 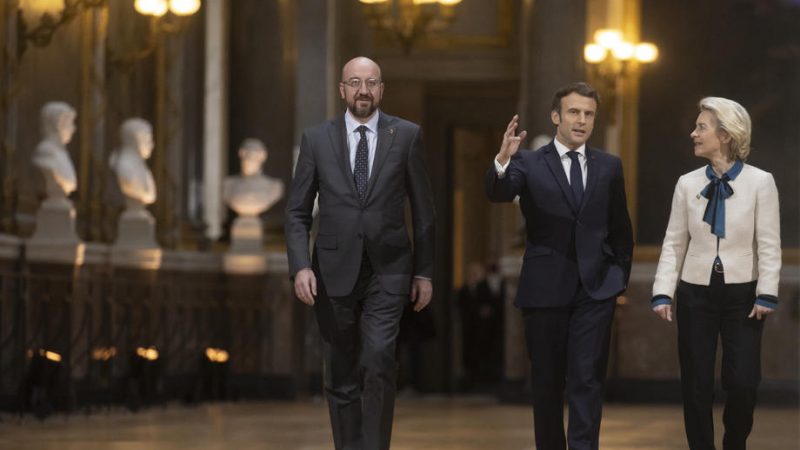 French President Emmanuel Macron, who has spearheaded the idea of European strategic autonomy since taking office, intended the informal Versailles summit to be a ‘watershed’ moment for talking about how the EU could bolster its standing on the global stage.

The EU has over the past years faced divisions over how far to pursue integration when it comes to its common defence policy while streamlining its efforts with those of NATO.

With Russia’s invasion of Ukraine, the momentum for Macron’s push might finally be there.

“If some thought that war in our countries was part of history, the choice of Russia, of President Putin, was to bring the war back to Europe,” Macron told reporters after the summit.

“Faced with this and the violence deployed by Russia against Ukraine and its people, we are at a tragic turning point in our history. We are fully aware that it is also a turning point for our societies, our peoples and our European project,” Macron added.

In Versailles, Macron announced an extraordinary summit on defence under the French EU Council presidency before June to discuss the bloc’s further steps on defence.

“Confronted with growing instability, strategic competition and security threats,” EU leaders vowed in their joint declaration to “take more responsibility for our security and take further decisive steps towards building our European sovereignty”.

European Commission President Ursula von der Leyen said EU leaders had asked the EU executive to prepare an analysis of the defence investment gaps and develop a plan on how to deal with those by mid-May.

Defence expenditures, however, are a national commitment that lies in the responsibility of member states.

“We must resolutely invest more and better in defence capabilities and innovative technologies,” they said, adding that the bloc should look to “foster synergies between civilian, defence and space research and innovation”.

EU leaders also announced “measures to strengthen and develop our defence industry”, but it is unclear whether this was meant to result in a ‘buy European Act’ for member states to start acquiring ‘home-produced’ European defence equipment.

The latest push to bolster European defence comes as the bloc is drawing up a new military strategy document, the so-called Strategic Compass.

As EURACTIV reported earlier this week, Russia’s invasion of Ukraine has prompted a significant rewrite of the blueprint, with the security threat of Moscow’s aggression becoming the red thread throughout the document.

The blueprint, meant to become a roadmap for policy decisions for the next decade, is planned to be adopted in March.

However, the war in Ukraine has also made clear that France’s concept of strategic autonomy is far from being shared as a priority by many European member states.

EU leaders and officials across the board have welcomed moves from countries like Germany, which has long played down the role of its military in foreign policy, and especially Finland and Sweden, usually insisting on their neutrality in military matters, to boost defence spending in light of the Ukraine war.

Denmark, meanwhile, will hold a referendum in June to decide whether to keep its opt-out clause for the EU’s common defence policy. Germany, for its part, has decided to boost defence spending and Chancellor Olaf Scholz said “everybody, without exception, has referred very positively” to the decision.

European Internal Market Commissioner Thierry Breton, who is also responsible for the Commission’s defence portfolio, told French radio on Friday there was a need to “gradually build a more effective Europe in terms of defence (…) less naïve, more sovereign”.

“A number of countries are spending more on defence and on protecting Europe, and in fact, all countries benefit from this,” Breton said.

EU leaders were also meant to agree to double the financing for military aid to Ukraine by an additional €500 million as part of a broader push to help Kyiv’s forces fight off Russia’s ongoing invasion. However, it appeared that final approval had not been given yet.

Last month, the EU broke a long-standing taboo by agreeing to use its resources to provide weapons to a third country through the so-called ‘European Peace Facility’ (EPF), earmarking an initial tranche of €500 million for Ukraine’s defence.

The recently created intergovernmental fund thus opened the door for the bloc to deliver military aid to partner countries and finance the deployment of its military missions abroad.

On Friday morning, the EU’s chief diplomat Josep Borrell had insisted EU leaders would be united to approve the top-up: “It’s going to be immediately, now the money flows quickly”.

EU officials said the new tranche of money would go towards reimbursing member states that were unilaterally sending arms requested by Kyiv.

The move was part of a broad push by Ukraine’s allies to send weapons in the face of desperate pleas from Kyiv for more support.

However, some EU leaders denied an agreement on such a step has been reached.

Speaking after the meeting, Dutch Prime Minister Mark Rutte said EU leaders had not approved any proposal from Borrell.

“I heard this story, it might be that this is something it is playing out at the European Commission,” he said. “But you have to check, it has not been decided together.”

Questioned further on Borrell’s proposal to double the size of the funds earmarked for Ukrainian defence, German Chancellor Scholz said it remains a “possibility,” adding that the European Commission “will make proposals on this”.

He also said Germany was “in the process of launching new support services” regarding Ukraine, stressing that “this is a very special situation, you cannot be slow and wait.”

“We will continue to work on all of this,” he said.