A new dawn for nuclear disarmament, a new voice needed for the EU

By A group of 7 MEPs 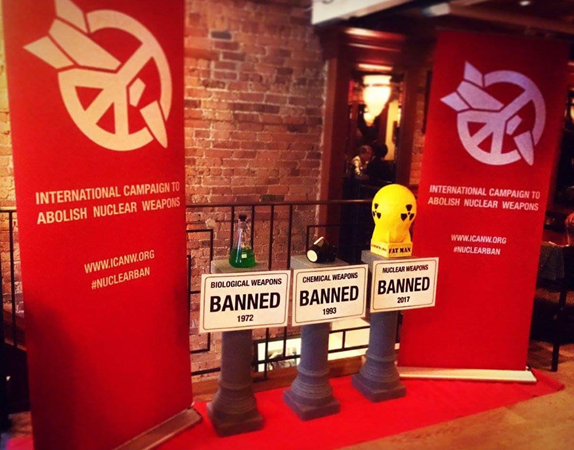 As of today, 22 January 2021, the UN Treaty on the Prohibition of Nuclear Weapons enters into force and bans the most destructive and inhumane class of weapons ever created. While the EU’s member states do not yet take the same view on this treaty, we want the EU to take a more active role in responding to the urgency of nuclear disarmament.

The authors are a cross-party group of 7 Members of the European Parliament.*

Such leadership on part of a major international actor is direly needed to implement international law and respond to the global demand to cease perpetuating this catastrophic menace to mankind and all life on earth.

75 years after the first nuclear bombs were dropped on the cities of Hiroshima and Nagasaki, the UN Treaty on the Prohibition of Nuclear Weapons finally and unequivocally changes international law: nations worldwide have agreed to make nuclear weapons illegal.

This ban, signed by 86 states and ratified by 51, was adopted by 122 countries in 2017 to fill a gap in international law, which has become all too clear with nuclear-armed states over decades failing to fulfil their commitments to nuclear disarmament.

We join our voices to those states declaring that time has come.

Time has come for nuclear-weapon states, including France, to dismantle their arsenals.

Time has come for host states (in the EU: Belgium, the Netherlands, Italy and Germany) to cease their complicity with this reckless posturing.

Time has come for banks to stop financing the production and maintenance of the worst weapons of mass destruction.

The bombs are the seeds of division, not the ban treaty

As representatives of European citizens, we are proud of the leadership of Austria and Ireland in bringing about this ban treaty.

We are also proud that Malta stuck to its support for the ban.

With many political parties and civil society in Europe supportive of this ban, and in view of overwhelming popular support, we are confident that more member states will join and choose to stand on the right side of history.

Lately, Commission officials have affirmed that a « modus vivendi » needs to be found vis-a-vis the emergence of the UN Treaty on the Prohibition of Nuclear Weapons. Let us not forget: division in the EU on the (lack of) progress of nuclear disarmament did not emerge with the ban treaty.

They are rooted in the adherence to the nuclear deterrence credo on part of some member states, and the search for true and lasting security via the abolition of nuclear weapons on part of others.

Seeking a «modus vivendi » comes down to adopting a minimalist approach to the ban on nuclear weapons. By pursuing such an approach, EU officials set ambitions for EU foreign policy and for nuclear disarmament too low.

The EU should not condemn itself to be a bystander in this field, merely trying to contain internal divisions. By refusing to acknowledge the ban treaty, the EU instead risks standing in solidarity with the nine nuclear-armed states, in their defence of the last and worst weapons of mass destruction.

The fact that most EU member states boycotted the process leading up to the prohibition of nuclear weapons did not pass unnoticed on the world stage, and threatens Europe’s credibility in upholding multilateralism, international law, and human rights.

If we cannot declare, along with the majority of the world states, that the worst weapons ever invented must be prohibited due to their incompatibility with international humanitarian law, then how can we continue to claim that we are working towards a nuclear-weapon-free world, or at least a reduction in the most imminent nuclear dangers?

The EU must strive to bolster multilateralism, not just in trade and climate policy, but also when it comes to security.

The EU can play an important role in rebalancing European states’ positioning with respect to weapons of mass destruction, and speed up nuclear disarmament diplomacy, through all means available, bringing together all complementary international nuclear disarmament initiatives, and making the best use of the political mandate it receives from its member-states and parliament.

For some time, divisions within the EU on the urgency to achieve nuclear disarmament have remained unresolved. In the meantime, must Europe remain voiceless on the nuclear ban? Where there is a will, there is a way for the EU to play a constructive role vis-à-vis the ban treaty.

In its latest resolution on nuclear disarmament, the European Parliament stressed that the ban treaty is clear evidence of the desire of the international community to achieve the objective of a nuclear-weapon-free world.

Members of the Social Democrats, European United Left/Nordic Green Left and the Greens/EFA of the house expressed their hope that the ban treaty will contribute to the implementation of the 22 steps on disarmament agreed by unanimity in the 2010 Non-Proliferation Treaty Action Plan.

We call on the EU to increase its presence and action in this field. We call on Josep Borrell, our High Representative, to seek a mandate from the Council of the EU to represent the EU as an observer to the first Conference of State Parties, to be held in Vienna within 12 months of entry into force.

We also call on the EU to increase its political support and funding for research and international cooperation on nuclear warhead dismantlement verification. The EU can contribute to the implementation of the ban treaty by preparing this crucial step of the disarmament process.

The EU can usefully leverage the impetus created by the ban treaty to further this pre-existing goal.

The EU should also support the articles of the ban treaty which resonate with its own humanitarian and environmental agenda.

For instance, EU agencies can and should assist the long-standing victims of nuclear tests, and support the remediation of the environmental damages, some of which were caused by Member-States.

The ban gives legal agency to the victims of nuclear tests, and the EU is in a position to heed these calls, as it successfully did in the past for other types of remnants of war, such as landmines.

Getting European executives in tune

The EU can take concrete action to further the goals of the nuclear ban treaty in powerful ways. By doing so, the EU would gain legitimacy as an actor and a leader in nuclear disarmament.

Such foreign policy ambition should not be held back by individual Member-States. Since negotiations on the ban-treaty started at the UN, nuclear-armed states have sought to sabotage the ban treaty. They have campaigned against it as either «useless» or «dangerous». Not the bombs – the prohibition treaty.

Why have these executives so fiercely resisted a treaty carefully crafted by international legal experts and which strengthens and complements the existing body of international norms on nuclear disarmament, including the Non-Proliferation Treaty as its cornerstone?

Because they know that delegitimising nuclear weapons, and prohibiting them in view of their catastrophic humanitarian consequences, is an effective way to reduce the role of nuclear weapons in our security doctrines and the resources allocated to them. Which runs counter to the course nuclear-armed has set themselves on: expanding their arsenals, investing billions in their modernisation.

Denigrating a treaty supported by the international Red Cross/Red Crescent Movement, by human rights and environmental organisations and states like Mexico, Brazil, Indonesia, Costa Rica, Nigeria, South Africa and Austria has shown itself to be unproductive.

This is why we ask the Council of the EU to build a consensus that none of our Member-States stands to gain from obstructing international negotiations on nuclear disarmament.

We ask our EU representatives, and especially our High Representative, to show courage in the face of retrograde pressures and the short-sighted belief in nuclear deterrence.

The EU must stand on the right side of history, and this site lies with the supporters of the ban treaty and international law.

In her agenda for Europe, Ursula von der Leyen called for “a Europe that takes the global lead on the major challenges of our times”. Thirty years after the end of the Cold War, it is high time for Europe to seek this role in advancing nuclear disarmament.