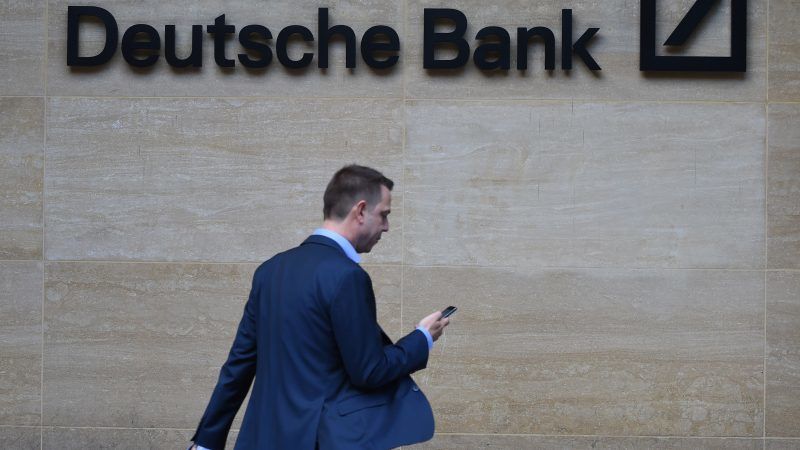 A man walks past by the British headquarters of the German Deutsche Bank in London, Britain, 30 September 2016. [Facundo Arrizabalaga/EPA/EFE]

Dr. Laura von Daniels is Deputy Head of Reserch Division in the German Institute for International and Security Affairs.

The EU has been seeking responses since Washington pulled out of the nuclear agreement with Iran (the JCPOA). The Agreement will collapse if Tehran loses the economic benefits of international trade and commerce. If major Western companies pull out – especially from the oil and gas sector – Iran will see little reason to honour its side of the bargain.

When Donald Trump withdrew from the JCPOA in early May he also reimposed “the highest level of economic sanctions” that had been waived as part of the Iran nuclear deal. The US sanctions are not restricted to the actions of US-owned businesses; Washington is also demanding that businesses and individuals in third states rapidly cease all dealings with Iran.

The nuclear-related US sanctions come into force on 6 August, although certain sectors including oil have until 4 November to comply. Not only will companies that do business with Iran be barred from doing business in the US. Under secondary sanctions banks and financial firms that do business with Iran will be excluded from the US financial markets. The US strategy appears to be effective: Even before Trump’s official announcement companies and banks operating in Iran were winding up their operations and repatriating their profits. To date no major EU or US bank has declared itself willing to take on the Iran business.

The European Commission could force European businesses to ignore US secondary sanctions under the Blocking Statute of 1996, which it updated on 6 June 2018. The Statute has never been used and if the EU enforces it now it risks being sued for damages by affected European businesses.

Another option for keeping economic ties with Iran alive would be to finance important Iranian infrastructure projects through the European Investment Bank. But Tehran has already made it clear that it will not be content with the “crumbs” of publicly financed projects.

On the other hand, the possibility of attracting major private-sector investment projects would represent a real incentive for Iran to uphold its JCPOA commitments despite the US withdrawal. This creates a third – and unusual – option for the German government which would also open up new vistas for the EU as a whole. Berlin could promote the establishment or conversion of a private bank designed to supply capital to corporations that remain interested in doing business with Iran.

It would ideally be an institution with comprehensive experience in corporate finance, independent of the US financial sector and without an investment arm of its own in the United States.

One potential candidate would be the troubled Deutsche Bank, which has already largely wound down its investment banking activities in the United States. If the German government were forced to use tax revenues to rescue Germany’s largest bank, it would gain a say in its business priorities. For Deutsche Bank this would create the possibility to expand back into a market it had been forced to abandon due to earlier US sanctions. Since 2015 companies have started investing billions in Iran again, with French oil giant Total and carmaker PSA leading the way.

According to media reports, the sectors selling goods to Iran include European aircraft manufacturer Airbus, carmakers, engineering companies, consumer goods producers, and transport and logistics firms. These exports would require financing through loans.

There are sure to be many objections to such a proposal. First of all there is a question of reputation for a bank doing business with Iran from where – with the exception of a number of credit unions – all German banks have withdrawn. Shareholders might be shocked, private customers perturbed and longstanding business clients unsettled. But if the bank would otherwise collapse, the harm appears relative. Another drawback would be the possible diplomatic ructions that such a move would spark.

If Paris and Berlin were able to agree on political backing for a German-based Iran Bank they could not only save the Iran nuclear deal but also gain a great deal for their respective business sectors. It would offer German companies the possibility to move ahead with planned investments and remain in the Iranian market. The same applies to French corporations that have already made large initial investments. And finally, businesses of all sizes across the entire EU could profit.

Another benefit would be the preservation of oil and gas supplies from Iran. In an age where great import is placed upon the need to diversify energy supplies, that is not insignificant.

It would also enhance the EU’s international weight by allowing it to block Russia – and above all China – from taking over the important Iranian oil and gas trade. Not least it would also send a strong message within the European Union, in the sense of governments putting deeds to the promises of “a Europe that protects” made by French President Emmanuel Macron and Commission President Jean-Claude Junker. That means an EU that is also willing to tread unconventional paths to protect its businesses – and ultimately its citizens.