European defence should not be the casualty of ‘the Great Lockdown’ 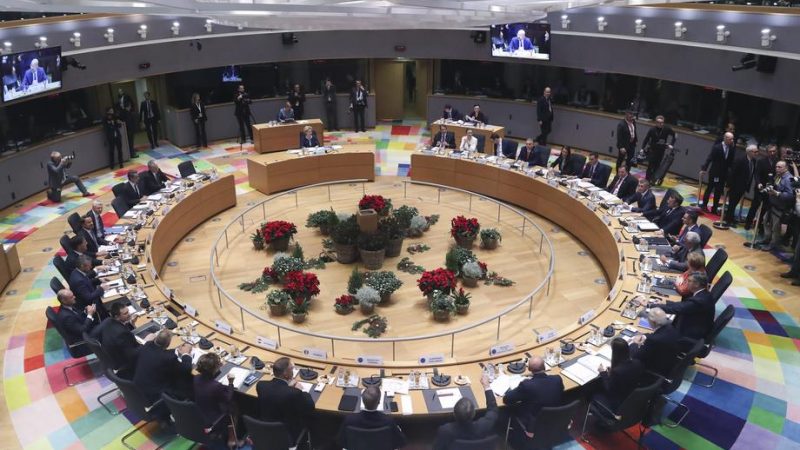 European leaders at the start of the roundtable during the European Council summit in Brussels, Belgium, 2019. [EPA-EFE/Yves Herman]

Europe is currently facing an unprecedented sanitary crisis, which will have gigantic economic consequences and could turn into a severe depression. A group of experts argue that defence should be included in the critical sectors as the EU renegotiates its next long-term budget that will seek to boost recovery.

Signatories are scientific advisers of the Armament Industry European Research (ARES) Group. Full list can be found at the bottom.**

As the European Union is planning its ‘exit strategy’ and long-term response to the pandemic, the Multiannual Financial Framework (MFF) for 2021-2027 has been reframed in recent weeks to be the backbone of its recovery plan.

Undoubtedly it will focus on critical sectors such as health or energy. We believe that the defence sector should be included in such critical sectors and that a revised version of the MFF should be the opportunity to reassert a truly ambitious budget for the European Defence Fund.

Today, we are rightfully focusing on the COVID-19 crisis, but the reality is that we do not know what crises are around the corner. This pandemic demonstrated that what was unthinkable could eventually happen. With the significant geopolitical challenges currently facing the European Union, this is no time to cut or under-invest in Europe’s defence.

Indeed, COVID-19 will not stop or mitigate the ongoing worsening of the international security environment threatening European security and interests. On the contrary, it is likely to make the world more unstable and more insecure.

Let us also remind ourselves that aside from the pandemic a number of crises still burn on the EU’s borders and wider neighbourhood. Let us remind ourselves also that the European defence industrial sector is a core element of the new impetus to make European military capabilities fit for the purpose to protect Europeans, a pillar of Europe’s strategic autonomy and ability to act, and a credible asset for its allies.

Even though the COVID-19 and the 2008/2010 crises are very dissimilar, they may well have very similar effects on European defence investments and industry, if fiscal consolidation policies were to be implemented.

Indeed, economic recession and cuts to military spending led to a significant fall in defence investments after the previous crisis. With a drop in GDP in 2020 which could be – at the EU level – between two and three times higher than after the 2008 crisis, there is a risk that defence will not appear – once again – as a priority to European leaders during economic recovery and fiscal consolidation.

Even more worrying, after 2008 and 2010 these cuts hit research and development (R&D) and its most prospective part, research and technology (R&T) that is critical to anticipate long-term defence innovation.

Yet, drying up money for defence research risks imperilling the initiation of major defence programmes at a time when Europe is trying to develop next-generation fighter aircraft, main battle tanks, frigates and other capabilities such as unmanned systems crucial for its military and technological edge.

Eventually, and whereas duplication and fragmentation have been long-standing and major problems for Europe’s defence, collaborative programmes were heavily impacted after 2010.

If such a scenario were to be replicated today, Europe would lose critical industrial and technological capabilities and develop new dependencies on third states. This would not only hamper Europe’s efforts to develop its strategic autonomy but would also significantly hinder the credibility of European nations as military partners., notably within NATO.

Already now, as defence firms are increasingly dual-use producers and the economic crisis is hitting the economy as valuable industrial capabilities (advanced technology, highly qualified jobs, etc.) are at risk and may well disappear.

Specific support for this sector will be needed to mitigate the economic crisis’ effects and preserve the long-term future of Europe.

We need to learn the lessons of the aftermath of the Eurozone crisis and not to repeat our past mistakes.

The European Defence Fund was, following the 2016 EU Global Strategy, and together with Permanent Structured Cooperation (PESCO), a key initiative to make our defence and security more collective and more credible while ensuring a more efficient use of public spending. Yet even before the pandemic, the EDF was under threat during the negotiations for the next MFF and it was proposed to halve its potential budget.

Such a scenario would significantly hamper the efforts made during the last decade to make European defence an effective and credible reality. It would have been such a waste of time and efforts.

Now is the time to redouble efforts and to use the MFF to leverage more EU defence industrial cooperation. Therefore, we believe the new MFF shall a minima stick to the original proposal of 13 billion euros budget for the European Defence Fund (i.e. 1% of the Union’s budget) and, if possible, to foresee a realistic increase.

As Europe gradually emerges from the pandemic, there cannot be no secure ‘new normal’ without a solid European defence.