NATO and its nuclear policy: In contradiction to its own security objectives 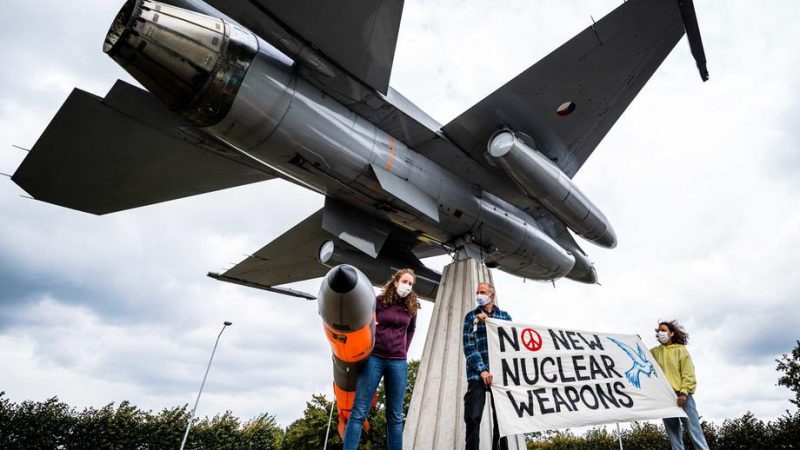 Campaigners of stand in front of the main gate of Volkel Air Base in Volkel, the Netherlands, 26 September 2020. [EPA-EFE/ROB ENGELAAR]

The existence of the Treaty on the Prohibition of Nuclear Weapons  – and its entry into force on 22 January 2021 – rang as an earthquake among states possessing or supporting a nuclear deterrence policy, write Jean-Marie Collin, Susi Snyder, and Tuva Widskjold.

This positive evolution of International Law is strongly rejected by NATO, which claims its “nuclear capability is to preserve peace, prevent coercion, and deter aggression” yet issues thinly veiled threats to those who would join this new UN Treaty.

The Alliance is creating conditions for proliferation and setting a dangerous precedent.

Let’s recap. Nuclear disarmament’s inertia is a reality. It’s carried out by States that possess or support a policy of nuclear deterrence. Compounding the problem, their constant modernization and renewal of their nuclear arsenal undermine the non-proliferation regime.

And if nuclear-armed states are accountable for nuclear weapons’ reduction, states that accept, support, and benefit from this defence system also have a responsibility.

No one claims that nuclear disarmament is an easy task. But one thing is certain: not doing anything or going against legal progress is a dangerous game.

By rejecting the United Nations Treaty on the Prohibition of Nuclear Weapons (TPNW), the Atlantic Alliance and its 30 democratic regimes have sent a clear signal to non-democratic States on “the right not to comply with International Law”.

The TPNW, adopted on July 7th 2017, is in force since January 22nd 2021. The Treaty, which has 86 signatures and 54 Member States, will welcome new Member States in the coming months.

It benefits from broad global support, as testifies the commitment of cities (Amsterdam, Berlin, Bruges, Paris, Manchester, Oslo, Toronto…) and parliamentarians from NATO Member States, to support it.

This Treaty reinforces non-proliferation and allows the implementation of NPT’s article 6 (nuclear disarmament). The latter, considered as the backbone of the non-proliferation regime, is in danger. Even the Alliance implicitly recognizes this danger in its Statement, “the enduring success of the NPT cannot be taken for granted”.

However, this reasonable thinking is confronted with contrary and irresponsible actions by three nuclear States of this Alliance: the United Kingdom announced its will to increase its nuclear arsenal, backing away from its 2010 NPT disarmament commitment.

France wants, in a parallel effort to support NATO, while completely renewing its arsenal, to promote the Europeanization of its nuclear deterrence, through strategic dialogue and the opening of French deterrence exercises to the other European States.

Finally, according to the Congressional Budget Office, the United States will spend a whopping $634 billion in the next ten years on new nuclear arms systems.

The facts are crystal clear. These states do not respect the “good faith” principle, as required by the NPT and the International Court of Justice Advisory Opinion (July 7th 1996).

The Alliance Statement also undermines the democratic values of the UN and its institution. It is important to be aware that the TPNW was subject to open negotiations (2017), during which all States could be present to expose their own point of view, and thus, influence the content of the text.

Except for the Netherlands, all NATO Member States stayed away from these negotiations. By challenging the TPNW’s existence, they are equally challenging the functioning of the UN and of its Secretary-General, who is the depositary of the Ban Treaty.

In our report “A Non-Nuclear Alliance: Why NATO Members Should Join the UN Ban on Nuclear Weapons” (116 pages), we have reviewed the Alliance’s arguments, point by point, demonstrating that they are based on myths, misconceptions, and deliberate lies. NATO’s hostility to the TPNW is in direct contradiction to its own security interests.

By working constructively against the threat posed by nuclear weapons, the Alliance Member States would protect their populations. Yet, today they keep relying on a deterrence policy to tackle this threat – which is only adding fuel to the fire.

Some NATO partners, in Europe (Austria, Ireland and Malta) or in Asia-Pacific (New Zealand, Philippines, Thailand), are already States Parties to the TPNW; and more are to come.

Others have announced their participation as Observatory States (Finland, Sweden, Switzerland) to the First Meeting of State Parties, which will be held at the UN in Vienna (12th to 14th of January 2022). And the list is expected to grow.

Yet, the Alliance is attempting to sabotage the sovereign will of countries and prevent them from engaging by calling on its “partners and all other countries” of the international community, to think twice before joining the TPNW.

This barely veiled threat reveals how scared the three nuclear-armed members are of losing the moral support they need to justify military capabilities, capable of causing catastrophic humanitarian and environmental consequences…

NATO cannot hinder International Law’s development. The TPNW has no other objective than to create more security, by becoming universal.

When declaring that its member states support “the ultimate goal of a world without nuclear weapons”, NATO must see the TPNW as an opportunity to put an end to a threat too many generations have known.