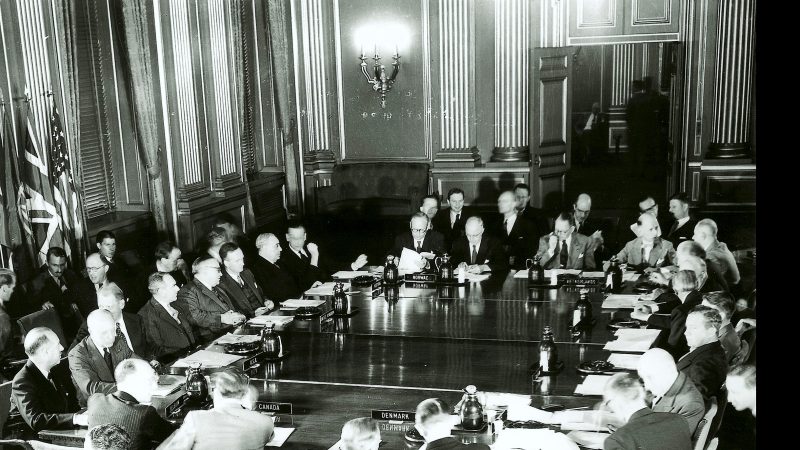 The first Atlantic Council with the Foreign Affairs Ministers on 17 September 1949 in Washington D.C. [NATO]

Try to imagine what life was like 70 years ago.

The Second World War had ended four years prior, the Cold War began and went on for more than four decades. On April 4, 1949, 12 countries forged a defence alliance that would bond Western Europe with North America. It brought together like-minded nations who shared a commitment to the values of liberty and democracy.

Formally inaugurated by the Washington Treaty, the North Atlantic Treaty Organization was created for political union and to defend members from threats, and continues to do so now.

Chris Lombardi is the vice president of European Business Development at Raytheon.

Today, NATO marks its 70th birthday. Defence Ministers will toast the occasion in Washington D.C. at a special gathering to reflect on NATO’s legacy, to take stock of where it stands, and to look ahead to its future. There are three things that remain important in keeping NATO relevant and prepared to address emerging threats: (1) Early and ongoing identification of capability gaps (2) Diversity in thought through industry collaboration, and (3) Smart and efficient spending.

For 70 years, NATO continues to play a crucial role in our defence and security. The alliance remains a proven example of what military-to-military cooperation and integration can achieve. Soldiers from 29 countries train together, fight together, and address threats together. NATO has stabilised and promoted democracy in Europe. The emerging threats may vary, but if NATO continues its collaborative, innovative practices then it will remain as relevant today as it was in 1949.