The Brief, powered by EPRA – A China war by the backdoor 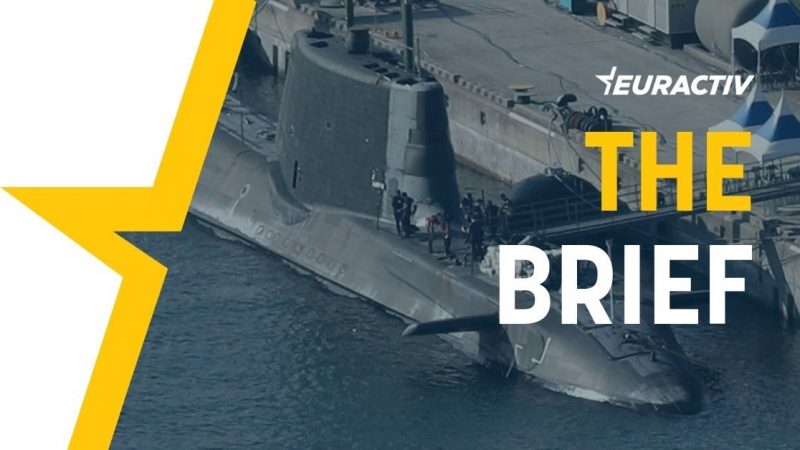 As diplomatic snubs go, the announcement by the United States, Britain, and Australia that they would establish a security partnership for the Indo-Pacific which would also help Australia acquire US nuclear-powered submarines – scrapping a $40 billion French-designed submarine deal in the process – is hard to beat.

This is a bitter blow for France on a number of levels. The lost contract leaves the French arms industry with a multi-billion euro shaped hole. That Canberra would choose a UK/US defence offer over a French one, at the eleventh hour, is a political punch in the stomach.

It represents something of a diplomatic coup for Boris Johnson, whose much-vaunted ‘Global Britain’ agenda has, so far, amounted to little more than warm words and a few copy-pasted trade deals.

Incidentally, the UK wants to join the Transpacific Partnership, a trade agreement including Australia, which China has also applied to join.

By targeting China so obviously, the defence pact also creates a potential headache for Europeans.

An EU diplomat told EURACTIV that this is the second time within a month that the US has acted unilaterally, sidelining Brussels, despite US President Joe Biden’s promise to have an open channel of communication and trust in the post Trump era. Afghanistan was the first case.

Another EU diplomat explained that it is also worrying that the US for the first time exports outside the country sensitive military equipment, nuclear-powered submarines.

In the past few months, European warships have increasingly made their appearance in the Indo-Pacific region.

France is currently the only EU country with significant naval forces in the region, but the rest of the EU is coming under heightened pressure to step up after President Biden marked China as a leading global security threat.

At the same time, those maritime presence attempts mean that NATO assets are technically directly involved in the region.

In the hypothetical situation that the UK, US, or Australia were to find themselves in a hostile confrontation with China in the South China Sea, the European members of NATO would all be dragged in, should Article 5 of the NATO treaty be invoked.

That, at least, is the fear in the European Commission and several European capitals. The episode is another wake-up call for Europeans that when it comes to the crunch, Europe stands alone. Strategic autonomy, currently just an empty catchphrase, needs to have flesh put on its bones.

Angela Merkel has governed Germany for 16 years and proven a reliable ally both in Europe and for the world. Will her party colleague hoping to succeed her follow in her footsteps or diverge from her path in order to forge his own legacy?

The EU pressed the US Administration to agree on the reform of the World Trade Organisation’s dispute settlement system amid deep divisions running through the institution.

The European Parliament passed a resolution on Thursday (16 September) making a clear distinction between the Russian people and the regime of President Vladimir Putin, which it described as a “stagnating authoritarian kleptocracy led by a president-for-life surrounded by a circle of oligarchs”.

Wealthy countries fell short of the promised $100 billion of climate finance provided to developing countries in 2019 and are expected to miss the target again for 2020, according to the head of the Organisation for Economic Co-operation and Development (OECD).

As always on Friday, don’t forget to check out our Digital and Global policy briefs.