The Brief, powered by GIE — French frigates to fight German submarines in the Aegean? 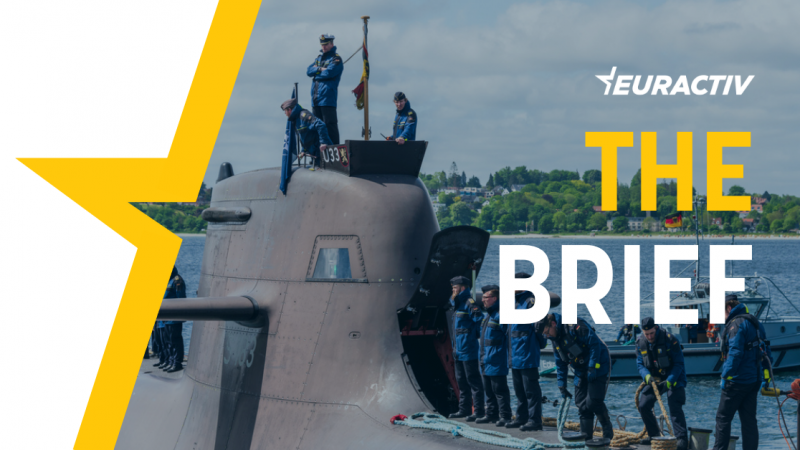 The EU is quick to call for de-escalation in case of conflicts, it is ambitious about setting itself targets such as “strategic autonomy”, and it succeeds to make its voice heard in the world.

That’s the good side of the story.

Another side, however, is that the EU is hardly convincing when it comes to a conflict like the one that opposes EU member Greece and (still officially) EU candidate Turkey.

France and Greece signed last week a landmark military agreement that was perceived as the first EU step toward strategic autonomy in defence.

The deal provides mutual assistance in the event of one party coming under attack by a third country, even if the latter belongs to NATO, such as Turkey.

But at the same time, Germany has sold six submarines to Turkey that will be used in the Aegean Sea.

The two deals are hardly “business as usual” and they raise some questions that have to be answered in terms of Europe’s push for strategic autonomy.

By the way, Paris and Athens have celebrated the signing of the deal for different reasons.

French President Emmanuel Macron wanted a quick response to the AUKUS deal fiasco. For his part, Greek PM Kyriakos Mitsotakis had to send Ankara a message that he is not alone, especially after his push for EU sanctions against Turkey largely failed.

Greece has long complained about Germany’s sale of submarines to Turkey and has asked for an arms embargo.

Both Christian Democrats and Social Democrats have rejected the Greek request. Among others, they have argued that they cannot cancel a contract signed years ago and that imposing an arms embargo on an ally and NATO member does not make sense.

Greeks have so far been backed by the German Greens and the leftist Die Linke party, who last January put forward a proposal to ban the export of German weapons to Turkey and, above all, of the six submarines.

It’s not clear if the Greens’ proposal will still be on the table in case they join a new government in Berlin.

If not, then it’s not entirely unlikely that, in a worst-case scenario, “French” frigates will fight “German” submarines in the Aegean Sea.

Another question is whether France will really back Greece in case there is a conflict.

The mutual assistance clause in the French-Greek deal is vague: it is not clear if it includes Greece’s Exclusive Economic Zones (EEZs) in the Aegean.

The EU has already criticised Turkey for incursions in recent years into the exclusive economic zones (EEZ) of Cyprus and Greece, following the discovery of extensive natural gas reserves off the coast there.

The issue seems legalistic, but it’s more than sensitive politically.

Notably, Article 2 of the deal stipulates that “the parties shall provide each other with assistance, with all appropriate means at their disposal, and if necessary, by the use of armed force, if they jointly find that an armed attack is taking place against the territoryof one of the two, in accordance with Article 51 of the Charter of the United Nations.”

Analysts and opposition parties in Athens have pointed out that France should clarify whether the deal also covers Greece’s EEZ.

If not, the main opposition party, the leftist Syriza of former prime minister Alexis Tsipras, has said it would vote against the deal in the parliament.

OK, this is Greek politics. But how about EU politics? While military escalation is on the rise in the Aegean, we can only wonder: where is the EU in all this?

Catalan separatist leader Carles Puigdemont appeared in court on Monday for an extradition hearing regarding sedition charges linked to Catalonia’s 2017 failed independence bid. A few dozen supporters gathered outside, waving Catalan and Sardinian flags and chanting “freedom” as he arrived.

During what may be her last address before stepping down, German Chancellor Angela Merkel called for a Germany “in which we shape the future together.” She asked Germans to recognize their diverse backgrounds and emphasised that “each and every individual must be able to feel heard and belong.”

The UK is moving closer to suspending the Irish protocol, which keeps Northern Ireland in the EU’s single market for goods, in its Brexit agreement, Brexit minister David Frost warned on Monday.

The likelihood of another global pandemic in the next 20 years is a reality, and the COVID-19 crisis has highlighted that the EU and member states need to do more regarding preparedness and response planning for epidemics and other serious cross-border health threats. So what are the first steps towards preparedness and resilience?

A 2019 survey showed that 33% of Italians believed that efforts made to fight discrimination in the country were moderately effective. That said, how do Italians approach equality and anti-discrimination today?