To face the Russian threat, Europeans need to spend together – not side by side

By A group of defence advisers 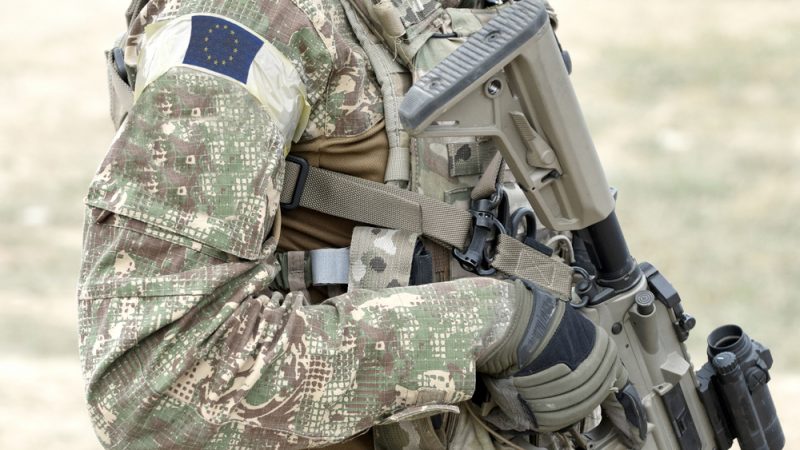 If European states are to make good on their promises to protect their interests and their continent, they will need to stand side by side, but invest together, write a group of scientific advisers to the Armament Industry European Research Group. [Shutterstock/Bumble Dee]

If European states are to make good on their promises to protect their interests and their continent, they will need to stand side by side, but invest together, write a group of scientific advisers to the Armament Industry European Research Group (ARES).

The full of list of authors can be found below.

War has returned to Europe. Vladimir Putin’s invasions of Ukraine have forced Europeans to acknowledge both that war is no longer a thing of the 20th century, and that the 21st century does not let it happen only to other people.

Spurred on by public opinion, the continent’s leaders have reacted in turn by pledging to redress their comparative military weakness. Germany has announced a €100 billion fund dedicated to defence acquisitions and promised to make good on its commitment to spend 2% of its gross domestic product (GDP) on defence.

Since 21 February, Belgium, Estonia, Latvia, Lithuania, the Netherlands, Norway, Poland, Romania, Sweden, Spain and Italy have announced plans to raise defence spending to at least 2% of their GDP.

After decades of chronic under-investment, which Russia’s previous attack on Ukraine in 2014 had started reversing, Europeans appear to have recognised that credible means of guaranteeing the security of their own citizens are a necessary precondition for protecting both Europe and the transatlantic relationship.

Counterintuitively, however, this sudden increase in defence budgets may not reinforce Europe’s collective ability to respond to military aggression. This is because Europeans in both the EU and NATO cannot be content with spending more on their militaries – they must also learn to spend much better.

Despite the numbers, however, Europe has never been close to generating the force of 60,000 men set out in the Helsinki Headline Goals of 1999 – which itself compares unfavourably to the 150,000 soldiers Russia amassed at short order on the borders of Ukraine. In the face of this existential threat, Europe cannot afford to let this situation linger.

Yet numbers alone are not sufficient to create a sense of common purpose, an ability to cooperate on the battlefield, or indeed the means required to do so. Europe’s longstanding failure to address the capability shortfalls it has identified both in the NATO or EU framework is a telling illustration.

Developing strategic enablers – air-to-air refuelling, strategic airlift or reconnaissance and intelligence capacities, for example – has been a priority target since the late 1990s which has still not been achieved. Scattered and incoherent spending today will only compound the issue by creating more fragmented means and less interoperable militaries.

Instead, the new fiscal and strategic environment affords all Europeans with a historic opportunity to spend in a more coordinated and coherent way.

The EU’s recent adoption of a Strategic Compass shows its willingness to give fresh impulse to its old aim of a “progressive definition of a common defence policy”. Two key challenges lie ahead, however, if Europeans are to match new ambition with new means.

While endeavours at EU level have typically tended to focus on long-term capabilities, short-term needs have taken precedence over the last few weeks. Europeans will thus need to strike a balance between short and long-term investments: they must be prepared for further military confrontation in the coming months, as well as for the possible wars and deterrence of the 2030s and 2040s.

They must also be prepared to work together, even when – as is the case with the United Kingdom and the EU – institutional affiliations do not always align.

Poor coordination and increased short-termism may also undermine ongoing efforts to reinforce Europe’s strategic autonomy and Defence and Technological Industrial Base. In this context, the risk is real that Europeans acquire off-the-shelf capabilities produced outside of Europe.

A similar balance should be struck between urgency and the need to build the EDTIB the continent needs for the coming decades. European Incentives for long and short-term cooperation are therefore needed more than ever.

In short, if Europeans are to provide the lasting means of protecting their interests and their continent, they do not have a choice: they will need to stand side by side, but invest together.