Why Europe’s militaries should worry about climate change 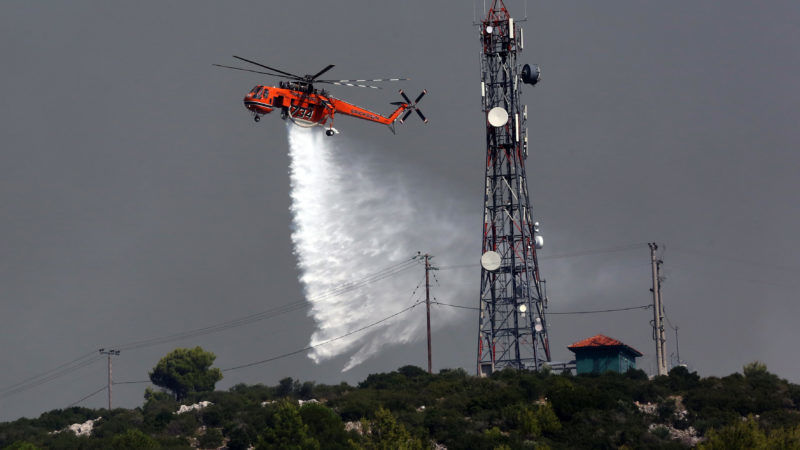 As the planet heats up and extreme weather events become more devastating and frequent, Europe’s armed forces and their capabilities will increasingly be challenged as well, argues Lukas Trakimavičius. [Orestis Panagiotou/EPA]

As the planet heats up and extreme weather events become more devastating and frequent, Europe’s armed forces and their capabilities will increasingly be challenged as well, argues Lukas Trakimavičius.

Lukas Trakimavičius works at the Research and Lessons Learned Division of the NATO Energy Security Centre of Excellence. He previously worked at NATO and the Lithuanian Ministry of Foreign Affairs.

The views expressed in this article are the author’s own and are contributed in a purely personal capacity.

Unless one has lived under a rock for the past few weeks and months, it’s hard to miss the fires, floods and heatwaves that have brought suffering to millions across the globe. However, while the civilian consequences of climate change are well covered in our everyday press, there are just as many grave implications for the military.

While it is possible to endlessly drone on about the military consequences of climate change, for all intents and purposes, the most important implications can be boiled down to four points.

Rising sea levels will threaten military facilities in coastal areas. As global temperatures climb and continental ice sheets and glaciers melt, more water is being added into the oceans. Seawater also expands in volume as it gets warmer. Over the past 100 years, the global mean sea level has already risen by nearly 20 centimetres and, by the end of this century, depending on how well countries respect their climate commitments, it will increase by an additional 40-120 centimetres.

This might spell trouble for the naval forces of Germany or the Netherlands, just to name a few. It is expected that high-tide flooding and storm surge will increasingly batter naval facilities in low-lying coastal areas and cause damage to their infrastructure and equipment.

In a bid to maintain a robust deterrence and defence posture, governments will be forced to provide more resources to stave off the worst effects of sea-level rise. This means that billions of euros will have to be spent not only on infrastructure repairs, but also on the development of coastal protection measures like dykes, sea walls and surge barriers. In exceptional cases, some naval bases might even need to be relocated, putting an even greater strain on defence budgets.

Global warming will threaten the Middle East and North Africa (MENA) possibly more than any other region in the world. In practical terms, hotter temperatures means prolonged heatwaves, desertification and droughts. What is more important, all of these factors have often preceded outbursts of social unrest and migration. For instance, before the start of the Syrian civil war, the country was affected by a generational drought that drove millions of rural farmers into urban centres like Damascus or Aleppo, creating fertile ground for friction and discontent.

While it is obvious that the brutal policies of Bashar Al-Assad played the dominant role in triggering the Syrian civil war, there are few doubts that factors like water shortages, crop failures and economic downturns can exacerbate lingering tensions and create new confrontations.

Considering the MENA region’s proximity to Europe, it’s very likely that any future instability there would mean more work for European armed forces. In a bid to prevent bloodshed or massive refugee flows, Europe’s militaries would likely have to intervene in some of these conflicts as keepers or builders of peace.

Due to rising temperatures there will be far more devastating extreme weather events. This is because warm air can hold more moisture and in warm temperatures water evaporates much faster. Consequently, places with high precipitation, like the Balkans or the Alpine region will increasingly be at risk of heavy rain and deadly flash floods. Meanwhile, dry regions like the Mediterranean will experience more droughts and wildfires.

This will inevitably result in a greater need for disaster relief missions and, due to its unmatched logistical and crisis management capabilities, the military will likely have to shoulder this weight.

While there is nothing new about the military’s crisis management role in times of distress, in the future the situation will likely get more demanding than before. As extreme weather events become more commonplace, defence planners will have to ensure that the armed forces would be ready to conduct multiple large-scale disaster response operations simultaneously – all while maintaining their international commitments and military preparedness against conventional threats.

The Arctic gets hectic

As the Arctic ice melts, the region will likely become a geopolitical flashpoint. Beneath the ice, there are vast deposits of natural resources like rare earth minerals, precious metals, oil and natural gas. On top of that, as the ice recedes, new all-year-round Northern Sea Routes will open up, which will provide the shortest maritime links between the Pacific and the Atlantic Ocean.

Yet, what makes the region particularly volatile is that countries like Russia have repeatedly made claims over Arctic territory. To support its aggressive rhetoric, Moscow has also restored a number of Soviet-era military installations, built new bases and is considering establishing more in the near future.

However, not only Russia is interested in the Arctic. Denmark, Finland, Norway and Sweden, in addition to the United States, all have vested interests in the region. And while this does not mean that there will inevitably be a confrontation in the Arctic, it does mean that over time, some European countries will have to devote more of their attention and resources to the High North.

Considering the stakes, European leaders cannot afford to hope for the best and go about with business as usual. Therefore, governments and international organizations should double down on awareness raising and resilience building initiatives, and start preparing their armed forces for the climate change challenges that are about to come.