Will the EU fight for peace or prepare for war? It can’t have it both ways 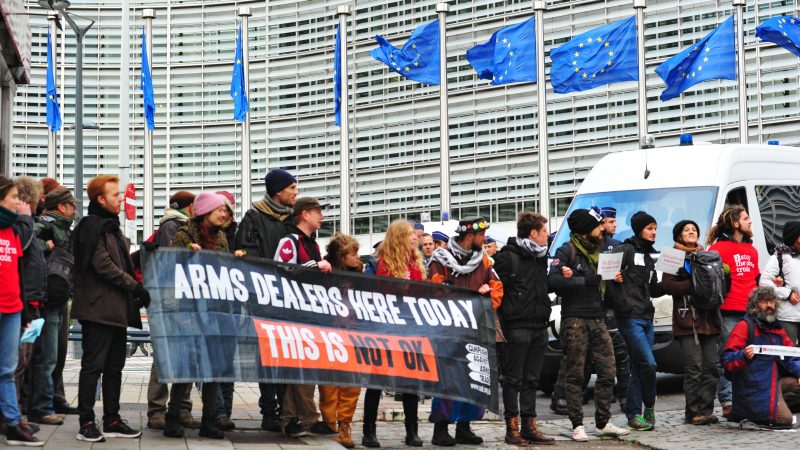 The EU bears a huge responsibility for what the future will look like, and has a key choice to make: work for sustainable peace by seriously tackling the root causes of conflicts, or continue the path to militarism and prepare for war, writes Laëtitia Sédou.

Laëtitia Sédou is the EU project officer at the European Network Against Arms Trade (ENAAT).

EU High representative Josep Borrell has declared that “the world that will emerge from this crisis will look very different from the one we know“ and “will depend on what we are going to do now”.

The current pandemic was predictable: both national strategic documents (from US to UK) and the 2016 European Global Strategy alerted for years about the need to get prepared for serious pandemics. Instead, many European countries took austerity measures, partly due to EU budgetary rules, which negatively impacted national healthcare systems.

In parallel, global military spending saw its biggest increase in 2019, and the EU is no exception: its collective military expenditure makes it second in the world for two decades, reaching $268 billion in 2019 including UK, four times more than Russia.

Those past choices look particularly choking today knowing that the price of a F-35 combat aircraft could cover the purchase of 3244 hospital beds and one-hour flight the annual gross salary of a nurse, that 440 ventilators could be bought with the cost of one Leopard 23 battle tank, or that the unit price of a Trident II missile could cover 17 million masks.

Will the current sanitary, economic and social crisis change the story and lead European decision-makers to revise the traditional military security approach by a human security approach encompassing all aspects of a decent livelihood like healthcare, education, food safety, healthy environment…?

Nothing is less certain.

The military industry lobby groups and their allies within influential think-tanks are rallying and calling to maintain or increase military spending. One argument is to overrate the role played by military actors in fighting COVID-19, putting aside that this was made necessary by scarcity. Another argument is that pandemics are not the only threats of the future, and they are right:

According to the Global Risks Report 2019 by the World Economic Forum, the top 3 risks in terms of likelihood are all environmental (extreme weather events, climate change, natural disasters). And the EU-tailored Normandy Index identifies energy insecurity as the biggest threat to the EU’s strategic autonomy.

Armament provides us with little protection against these. Strengthening further our military arsenal will not help much needed international cooperation, trust and diplomacy but rather feed fear and distrust, in other words, prepare for potential wars resulting from unresolved challenges.

Yet that is exactly what the EU is about to do.

While several measures of the recent Green Deal will be postponed, the COVID-19 hardly affected the implementation of the EU Defence Fund pilot phase: new military research projects have been selected almost on time, and new calls for proposals put €160 million on the table for the development of new military technologies.

For public relations purposes, a small amount will probably be dedicated to a pandemic-related project, but this does not change the main objective of the Fund to support the global competitiveness of the arms industry and the development of a new generation of weaponry.

This is strengthening the military and security industry, not the safety of EU citizens. By reducing R&T costs paid for with public money, arms producers will improve their position on the international arms market, leading to more arms exports which in turn feed tensions and armed conflicts.

It will neither help EU strategic autonomy nor its capacity to respond to a (very) hypothetical Russian aggression: as military spending figures show, the problem is not about money but about the predominance of national industrial and geostrategic interests.

If the European arms industry is of such importance, European governments should stop buying American weapon systems.

In the coming days, the European Commission will present to member states a new multi-annual budget proposal (for 2021-2027) that should include a large m recovery plan.

This new budget could be the opportunity for a reversed paradigm that will put an end to diverting EU resources (both financial and human) to the security sector and arms producers. But indications are not encouraging.

The European Commission has committed to continue pushing for an ‘ambitious’ EU Defence Fund for 2021-2027, with the help of its President and former Defence Minister Ursula von der Leyen and of the French Commissioner Thierry Breton, a former CEO in companies that will be eligible to this Fund.

And a possible substantial increase of the EU global budget could pave the way for returning to the initial amounts proposed by the Commission (€13bn for the European Defence Fund, €6,5bn for the military mobility and €10.5bn for the so-called European Peace Facility), or even to their increase.

Yet there is no time left for half-measures, nor for pretending we can have it both ways. The Green Deal was already very (too?) late and not up to the needs according to environmental organisations. Its implementation should rather be accelerated and amplified thanks to the recovery plan to come.

The latter should support the relocation of production to Europe, in particular for key sectors like medical equipment, renewable energy and food safety. Not only this would create jobs (including conversion of workers from the armament sector, whose high-skills will be much needed) but it will strengthen EU’s autonomy from external pressure.

Every Euro of the EU budget used for the military is a lost Euro to face interrelated environmental, climate and health challenges that represent today the most tangible threats to human security worldwide and the root-causes to many conflicts.

EU lawmakers and our governments will have to take key decisions in the near future. It will fall to them to choose whether the EU will serve the citizens or the military-industrial complex, in other words, serve peace or prepare for war.

3 responses to “Will the EU fight for peace or prepare for war? It can’t have it both ways”