Finland’s President Sauli Niinistö does not rule out a common foreign policy, which would make the European Union a global player. In an interview with EURACTIV’s media partner Gazeta Wyborcza, he speaks about security threats on the eastern border and his support for deeper integration in security and defence policy.

You regularly talk to Russian President Vladimir Putin. After the last meeting in July, it was written in the European media that Russia was trying to drive a wedge between Finland and the European Union.

I cannot believe that such words were actually spoken. I have met with President Putin many times. In the end, we are neighbours, we have to keep in touch with each other. Finland has perhaps the most unequivocal position among all EU countries in terms of maintaining the sanctions imposed on Russia. Although they hit us very hard. In such a situation, how can we speak of driving in a wedge?

Are you afraid that you will fall victim to Russia again?

I do not think there are many Finns who are afraid of a Russian attack. I don’t count myself in that group either. The same goes for my belief that the Russians would not invade the Baltics or Poland. If they were theoretically considering such an attack, World War Three would break out. This is a clash no one is able to win, all sides lose. That is why there will be no war.

What has changed in Finland since the Russian aggression in Ukraine?

Not much. We have already adopted different solutions than most European countries. We did not believe that after half a century without wars, peace would be given to us once and forever. This is why we didn’t cancel conscription like many other countries did. 1.3% of our GDP is spent on defence. In fact it is more, because contrary to other countries, we do not count in remuneration for soldiers and border guards or the cost of conscription. Now we are renewing our fighter jet fleet.

In other words, you fear ‘little green man’ and a hybrid war?

Yes, but we still do not know what a hybrid warfare would look like. We observe these types of actions in many countries all over the world.

But you do not want to join NATO, which would guarantee Finland’s security.

There is 25% support for an immediate accession to NATO. But the majority of Finnish society is against it. This does not mean that we made the final decision about joining NATO yet. Unlike Sweden we left the door open. In the future, we still can take a decision that we want to apply for membership.

We actively cooperate with NATO, also in military means. We directly cooperate with the United States. I have been dealing with European defense policy for many years now. We started talking about this ten years ago and finally you can see some movement.

Besides meeting Putin you also met with President Donald Trump this year. He is also a politician who raises many concerns in Europe.

Demonising partners does not help in politics. In Europe, many people have come to the conclusion that Donald Trump is the President of the United States and it is necessary to talk to him. Otherwise one should assume that you should not take the opinion of the United Stated into account anymore. In terms to geopolitics, one has to be pragmatic. Both with Putin as well as with Trump I was successful in finding a common language.

What is Finland’s position concerning the plans of the French President Emmanuel Macron, who wants to deepen European integration?

When it comes to security and defense policy, we support it in its entirety. I think Poland has a similar stance. I also spoke with [Polish] President Andrzej Duda and he was very interested in security issues, especially in the Baltic Sea region. What is a union that cannot provide security for its citizens? This is a crucial issue.

What worries us is the idea of mutualising the debt of the eurozone. Back in the 1990s, when we adopted the single currency, I was finance minister. If the other European governments had complied with the debt rules back then, we would not have had to deal with the economic problems of Italy and Spain.

In Macron’s plans, it is especially the eurozone that he believes should become the core of the European Union. For countries like Poland, which didn’t adopt the common currency, this could mean drifting into the periphery.

I do not think the eurozone could be something different than it is now. It is the core of the European Union when it comes to financial matters, but nothing beyond that. If other countries do not want to participate in common defense, they simply will not do so. I also do not think the Union will break up because of that.

Nevertheless, I am not against deeper integration, even if this will not apply to all EU countries, but under the condition that the Union will benefit from it. I am sceptical about a common eurozone budget, but not about a common foreign policy. The European Union is missing at the tables where the most important geopolitical problems are solved. It is missing in the talks on Syria, although Europe is virtually its neighbour. The voice of the major European countries – Germany, France, Poland – will not be heard when they will speak separately. What will happen if Moscow, Washington and Beijing start talking about us above our heads? We cannot allow this to happen. We have institutions in the EU that deal with foreign policy. But the will to act is still missing. 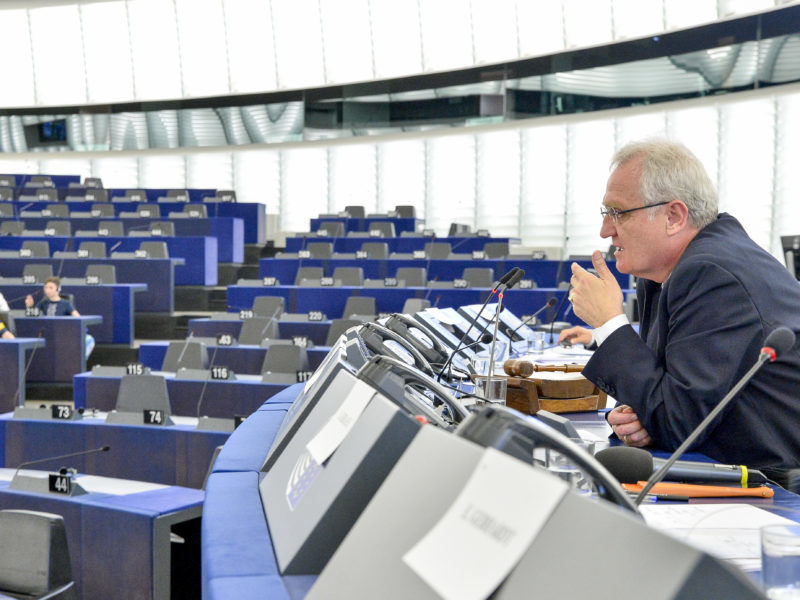 European Parliament VP: 'We must use the window of opportunity' to deepen EU integration

Populists, who are growing in strength, have a different view. They fear that the EU might become a super state.

For a long time now I’ve been hearing that Brussels should take care of more important things instead of issuing directives about trinkets. Maybe it is high time to do something about it? I am convinced that when the EU decides to ensure security for its citizens, its popularity will grow. People are afraid: in the West they fear immigration, terrorism and in our part of Europe you can add the fear of Russia. When Europe will have an answer to that, it will be a step forward.

There would not be that much fear if the EU could find a way to deal with the migration crisis.

The scale of immigration was a surprise. Now we have the agreement with Turkey in place [in which Ankara agreed to prevent immigrants entering the EU]. The Balkan route was closed, but people come to us over the Mediterranean from Libya. Tens of thousands of Africans want to find a better future in Europe. We need to help refugees, but not those who are just looking for a better life. We need a quick response. Therefore, the EU must ensure the safety of its borders. If it cannot do that, then every country will take care of it on its own. And then freedom of movement across Europe will end.