Global Fund chair: Development aid should not be about figures, but about people 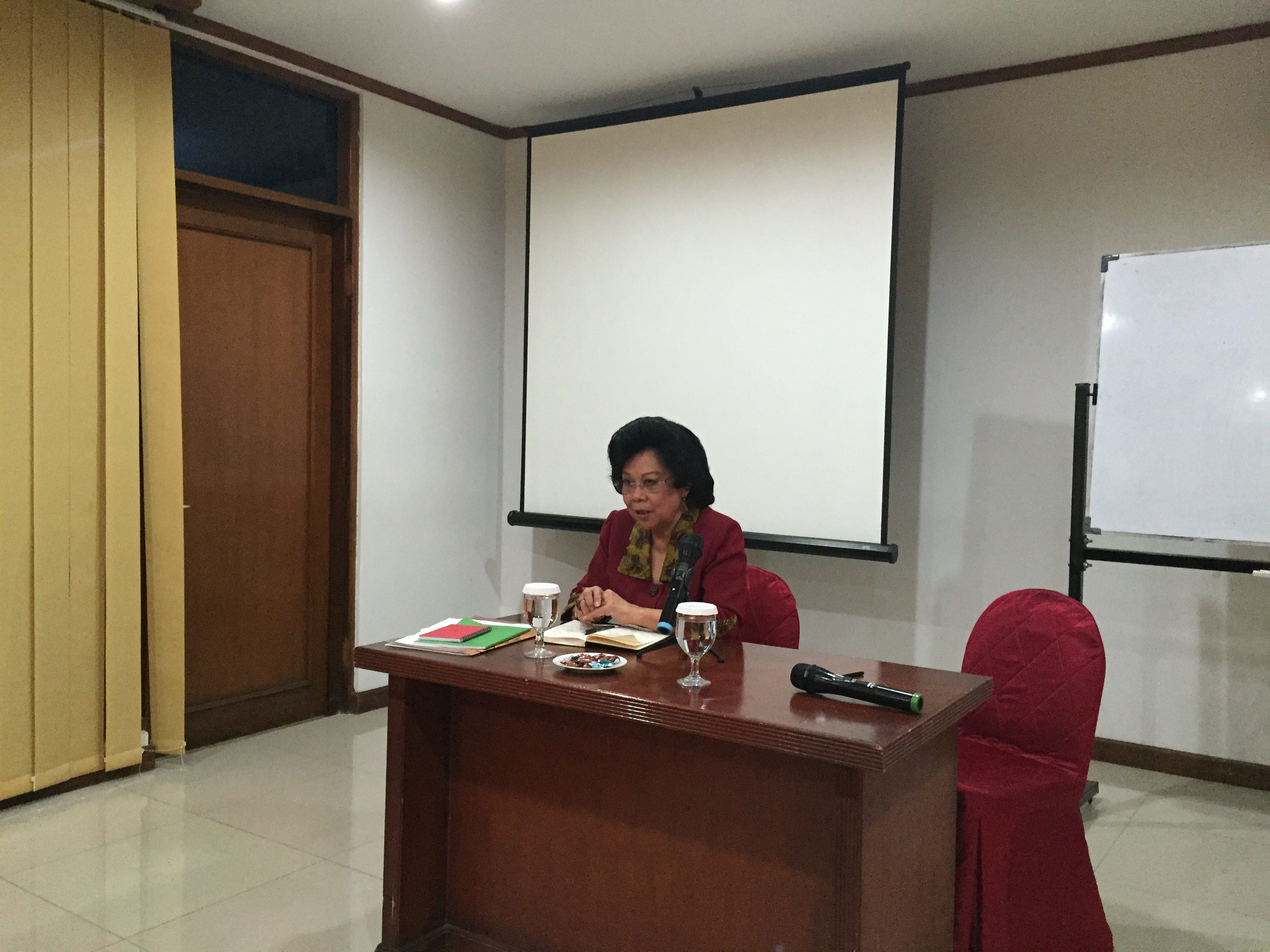 ?Indonesia is one of the developing countries which will soon stop receiving much of its development aid from the international society’s programmes, as the country is now seen as a middle-income country. However, there are huge inequalities and millions of poor people still in countries like Indonesia so policymakers should stop looking at the figures and instead focus on the people, says Nafsiah Mboi.

Nafsiah Mboi is Chair of The Global Fund to Fight AIDS, Tuberculosis and Malaria, an organisation which aims to attract and disburse additional resources to prevent and treat HIV/AIDS, tuberculosis and malaria. She is also a former minister for health in Indonesia (2012-2014) and one of the architects behind Indonesia’s health insurance scheme for the poor. Mboi spoke to EURACTIV’s Henriette Jacobsen in the Indonesian capital, Jakarta.

What is Indonesia’s free healthcare scheme for the poor about?

In 2004, we decided that we have to provide social security for the whole population. But (it was) not until 2011 we said that we had to do it, since it was now the law, and (made) it part of our budget. We set up the body in charge of the national social health insurance scheme. We have a roadmap so by 2019. The whole population will be covered.

The principle indeed, besides solidarity, is to help people out of poverty. No one should face financial risks. We have the responsibility of providing equal access for every citizen.

It has become comprehensive because it’s both prevention, health promotion, treatment and rehabilitation. How do you make sure that you cover the poor? We knew that 11%, 28 million, were poor, but there are also those who are nearly poor. They are not poor yet, but they will be if they become sick. So the decision was made to cover 86 million, where the government pays their fees, while the rest pay. That’s solidarity. At the moment 130 million have this scheme.

It was very hard work, as we had to put the law in place and then change the health system. Some healthcare facilities also had to be rebuilt. We had to improve our monitoring as well. We had to work with the health providers.

The work is not finished yet. But we can only move forward. We can only win. We are still learning. I know that not everything is working well, but because of the close monitoring and flexibility, I have seen a lot of progress.

Treatment of HIV/AIDS, tuberculosis and malaria is included in this. There are some people who disagree with me because they think getting HIV/AIDS is people’s own fault. Then I would respond that we should also exclude the smokers and the obese.

But looking into the future, I’m quite optimistic.

How is Indonesia tackling HIV/AIDS?

When it comes to HIV/AIDS, a lot of people said that it would never be a problem in Indonesia, because we are Muslims and all the men are circumcised. But I said that we had to do something. We had to prevent it because we have islands and thousands of harbours, and at every harbour there is prostitution. Another problem was drug use. So their argument did not make sense.

My involvement in HIV came very early, around 2006 and 2007. It was something I wanted to tackle, so I became head of our AIDS Commission. HIV/AIDS is not only affecting poor people, because, for example, drug use effects affluent people. In some pockets, over 60% were drug users. It was popular especially among young people in universities. I wanted to tackle that first, but the resistance was very high because drug users are criminals.

We set up a legal framework so that even though they were criminals, they still had the right to health. This is where the Global Fund also played a big role in supporting us financially, because no one from the government was even willing to listen. They only wanted to talk about treatment and not prevention.

We have seen HIV/AIDS rates go down, but unfortunately now it’s up again in some pockets. Sexually transmitted diseases were difficult to address. On my first day as Minister for Health, the press twisted my statement and wrote that I wanted to distribute condoms to school children. There were demonstrators in front of the ministry saying I was immoral and demanded my resignation and I invited them in to talk. I gave them the figures that 6-8 million men are buying sex in Indonesia. Can you imagine if they become infected? They never came back to demonstrate again. I decided not to only focus on prevention and free condoms, but also treatment, as prevention. Since 2013, we have given free testing of key effected populations. With a positive test, we immediately offer treatment.

How is Indonesia tackling tuberculosis and malaria?

Because we saw that the relation between HIV/AIDS and tuberculosis is so close, we have had interrelated projects since 2008. Especially in prisons, as there are so many drug users in prison. Later on the two were combined in a comprehensive approach in prevention as well as free treatment. Still, a lot can be improved. In our proposal to the Global Fund, we have said that we want to do this together. The prevalence of HIV/AIDS compared to tuberculosis is of course very small. The prevalence of tuberculosis in Indonesia is high, and it’s our main challenge. HIV/AIDS is concentrated in certain areas where you need to tackle tuberculosis by tackling poverty and overcrowding.

With malaria, the rate went up because our president had a fight with the WHO to make them stop controls. Then we were able to do the work with the Global Fund and the past 11 years, but now all the treatment is paid for via our national budget. 217 districts are now malaria-free. As we focused mainly on the five hardest-hit districts, we still have around 200 effected districts.

It has been important for me to emphasise to health workers that they are not allowed to discriminate anyone, if they have HIV/AIDS, tuberculosis or malaria. Sometimes it’s difficult to change people’s mindsets. I have told them many times that if they discriminate, they are out.

How is obesity becoming an issue in Indonesia?

We still have health gaps. In nutrition, unfortunately, I don’t have the exact figures, but I think that around 17% of Indonesians are now overweight, while in some areas we still have malnutrition. Since the late 1970s, we have been doing a lot of community work related to nutrition and immunisation and in other health areas.

We still have to fight poverty, and that is something we are struggling with now.

I think we can. I think we will be able to do this. Of course I’m not inside the cabinet now and the good thing about being inside the cabinet is that you can fight. If you fight from the outside of course, it’s tougher, but you can do it. I’m sure that my colleagues in the Ministry of Health will be able to continue this. They need to fight for more resources, but also for better use of the resources. We are able to have better data and decision-making should be based on that data.

If we can continue the work, then maybe we can graduate from the Global Fund in five years time.

Indonesia is now seen as a middle-income country and not a poor country, but there are pockets. There is a debate now in international organisations about whether you should only fund poor countries and say to the middle-income countries “It’s your problem. You take care of your people.” I say no to this. We don’t look at the figures, we look at the people. Where the problem is, that is where we should try to make a difference.

You have mentioned many times that you had to fight for the things you wanted within health. I’m thinking that even though health is a big expenditure for Indonesia right now, in the long run, it will give a boost to your economy, because the poor will be more productive and live longer. In Europe, during the economic crisis, all governments made cuts within their healthcare systems. That was the first thing they did. Why is it that politicians never see health as key in keeping their economies growing?

Yes and no to that question. There are leaders who understand that without good health, workers cannot be productive. Some say, you improve the economy first, and then they can take care of themselves. Now I see that some leaders want to leave with a good legacy on poverty.

Our new president is very keen on health, while other leaders want to focus on communication, transportation and education. So health is not being cut, but other sectors will get more.

We have to fight.

One response to “Global Fund chair: Development aid should not be about figures, but about people”