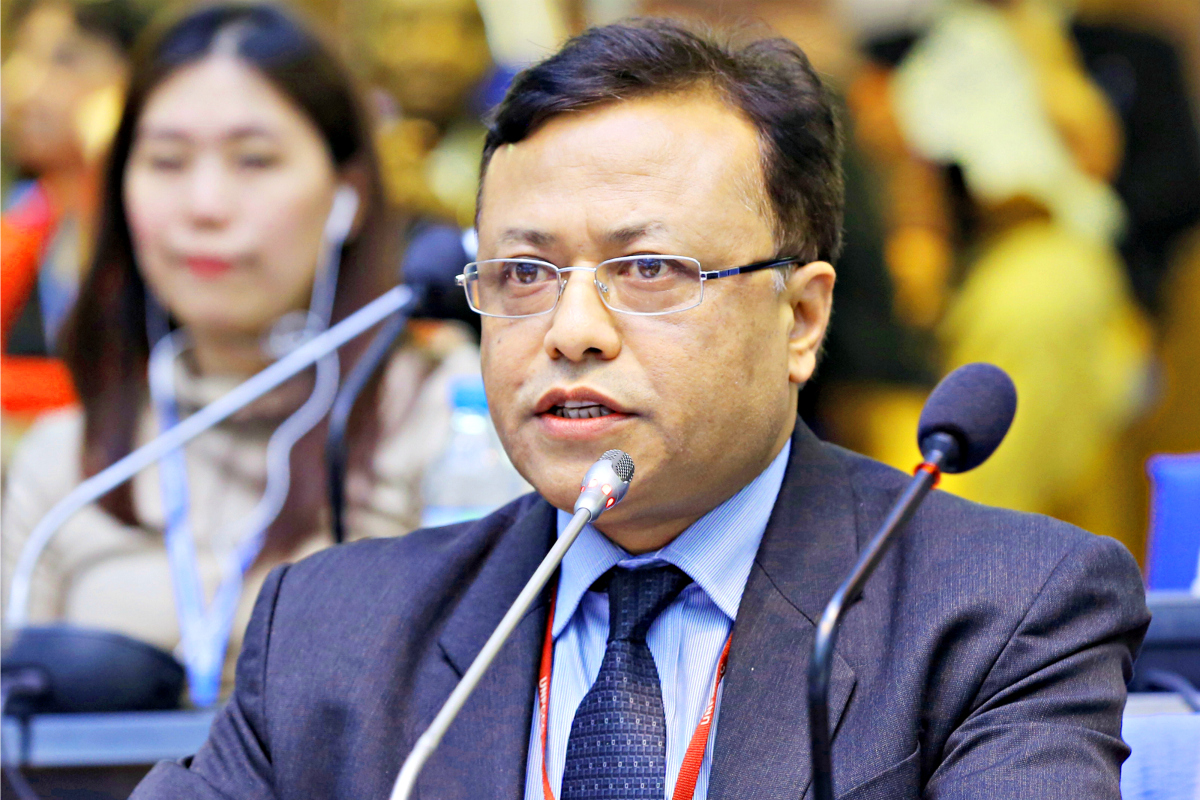 Nepal’s Prakash Mathema is leading the UN climate change negotiations for the group of Least Developed Countries Group (LDC). According to him, an ambitious outcome at the 2015 Paris UN summit can only be reached if vulnerability to climate change impacts of poorest countries are taken into consideration.

Prakash Mathema is joint secretary at Nepal’s Ministry of Science, Technology & Environment. He chairs the Least Developed Countries Group at the UN climate change negotiations. The LDC group represent 48 nations that are especially vulnerable to climate change but have done little to cause the problem, and will benefit from the Green Climate Fund.

You are the chair of the Least Developed Countries Group at UN climate change negotiations. What are the challenges and expectations of LDC Group regarding the negotiation process?

The ultimate goal for the LDC Group is to ensure that the voices, needs and priorities of the world’s most vulnerable people are heard and addressed. Climate change affects us all, but the negative impacts are felt hardest by the poorest, because they typically live in more dangerous locations, have fewer assets, skills and access to basic services to cope with impacts caused by climate change. If the global response to climate change does not give adequate attention to the circumstances and needs of the most vulnerable, then it cannot be equitable.

To represent the voiceless is a difficult task in itself, and in the negotiations process, the LDC Group has its own particular challenges in addition to this. Our countries’ delegations are much smaller than those of our wealthier counterparts. When our delegations come to climate change talks, we are supposed to follow all the agenda items between us – compared to other groups who may have one person following one or two items, or sometimes a small team following a single major item, like climate finance or adaptation.

We try to overcome this lack of capacity by strengthening coordination within the LDC Group, and we have developed a strategy for engagement over these past years. Negotiations are always difficult but I have confidence in my Group – all the negotiators are extremely committed, especially because we all know our countries have the most to lose if we fail to engage in the process as much as possible.

Leading up to Paris, the numbers of negotiating days are dwindling and we expect that substantial progress must therefore be made in the short time available to ensure that an ambitious and fair outcome for all can be reached in Paris. Vulnerability of our countries should be the benchmark for setting commitments in the new climate agreement because success in addressing climate change at global level will not be achieved unless the key concerns of those that are extremely vulnerability to climate change impacts are appropriately taken into consideration.

The UN Climate Summit was held last month in New York.  As chair of Least Developed Countries Group at UN climate change negotiations, did you feel that your group was listened to during this event?

The UN Climate Summit was a timely opportunity for world leaders to lay out their action plans and make bold pledges detailing what more they can do to combat climate change. In December, climate change negotiators will reconvene in Lima to continue work on the new climate treaty, which is to be adopted in Paris, in December 2015.

At the UN Summit, more than 20 LDCs spoke of their plans to undertake ambitious action involving low carbon climate resilient development and the sequestration of carbon through enhancement of forest cover.  To give two specific examples, the prime minister of Ethiopia pledged to achieve a green climate resilient economy with zero net emissions by 2025; and the prime minister of Tuvalu announced his commitment to employ 100% renewable energy in electricity supply by 2020. These ambitious pledges sent a powerful message about what is possible.  Even with the limited economic capacity and extreme vulnerability of our nations, the LDCs are leading the way to a low carbon future. We expect others to scale up ambition and leadership on climate change in more strongly than the LDCs.

COP 21 will be held in France in 2015. What do you think of the French position on LDC needs to fight climate change?

We have noticed that French diplomacy is already engaged in ensuring a successful outcome in Paris in 2015. The French government has been making efforts to ensure that Paris marks an important step in history of climate change negotiations. President Hollande pledged US $1 billion (€780 million) to the Green Climate Fund at the New York Summit. In addition to this, France is making necessary efforts to ensure a positive climate finance outcome in Lima. However, more efforts are needed for securing high mitigation ambition to fully demonstrate the French government’s commitment to addressing climate change. Paris should deliver an agreement that protects the future of the most vulnerable countries. We have full confidence in France’s leadership in getting an ambitious outcome in Paris that will limit the global average temperature rise below 1.5oC relative to pre-industrial level by the end of the century that addresses the needs of most vulnerable countries.

Developing countries such as China or India haven’t committed yet on how they will participate. What do you expect from these countries?

Countries like China, India and other rapidly emerging economies represent important voices in the climate change negotiations. We are encouraged by some positive signals from their governments in recent months, including China’s aim to submit its contributions to the Paris Agreement by June 2015, as well as some developments around a potential cap in China’s emissions in near future. These developments continue to send clear message to other major players in the negotiations, in particular industrialised economies, to scale up their ambition and put forward bold contributions.

One of the biggest things at stake in the negotiations is that developed countries mobilise money to effectively start the Green Climate Fund. Now, only France and Germany have made significant announcement ($1 billion each) but major countries like the UK or USA haven’t announced anything yet. Are you satisfied with the general commitment on Green Climate Fund and what do you expect from this financing tool?

The LDCs are encouraged by the separate pledges of $1 billion each made by Germany and France to the Green Climate Fund’s initial capitalisation in July and at September’s UN Climate Summit, respectively. The leadership shown by developing nations like Mexico and Korea are also encouraging. Pledges like these will help ensure that vulnerable countries like the LDCs have the means to adapt to climate change. This will also build trust in the negotiations for the 2015 agreement.

The LDCs hope that other countries will continue to pledge in order to meet the November deadline for the initial resource mobilisation of the Green Climate Fund. Thus far, pledges to the Fund have amounted to only $2.3 billion only.  This total falls far short of the Fund’s goal of raising $10–15 billion (€7.8 billion to €11.7 billion) by next month. The LDCs look forward to other countries joining Germany, France and others as contributors to the Green Climate Fund.

European Union is holding a summit on 23 and 24 of October to take a decision on 2030 climate goals and discuss of a common position for Paris Climate Agreement 2015. What do you expect from the EU?

We are confident that the EU will show renewed leadership on climate action both domestically and internationally. The LDCs look forward to the European Commission adopting its 2030 framework for climate and energy policy, which includes commitments to reduce greenhouse gas emissions and increase the share of renewables in the total energy mix.

In 2011, it was the LDC’s alliance with AOSIS and the EU, which broke through the gridlocked negotiations and put the world on the pathway to agree on a new treaty in 2015. The LDCs hope the EU will join us in continuing this spirit of leadership.

The EU will not participate in the first capitalisation of Green Climate Fund. What message is this sending to the LDC Group?

We are confident that EU member states will contribute individually to the Fund. So far, Germany and France are the countries that have pledged the highest amount to the Green Climate Fund. Denmark, Luxembourg and the Czech Republic were also among the few countries to announce contributions to the Green Climate Fund in New York. However, we are still very far from attaining the $100 billion (€78 billion) per year by 2020 mark, but the small amount that has been capitalised thus far is largely the result of the leadership of EU member states. We welcome this but urge others, within and outside the EU, to pledge and also scale up their pledges.

There is a lot of discussion on how climate action should be financed for LDCs, including proposal like putting a global price on carbon and climate bonds. Which tools would have the support of LDCs?

For the LDCs, it is important, that financial flows, especially for adaptation, come in the form of grants, not loans, and that they should come mainly from public sources. Our group is trying to understand the implications of the proposals to put a global price or tax on carbon, and to issue green bonds or climate bonds in particular to increase private sector participation in mobilising climate funds.

In fact, the LDCs proposed the establishment of an International Air Passenger Adaptation Levy in 2008, which would charge a small levy to passengers of international flights (differentiated by class of travel). This would raise between $8 and 10 billion annually. This amount will increase in the long-term, and would truly be new, additional, and predictable climate finance. We hope this proposal can gain ground again as we double up international efforts to significantly increase climate finance.

Most climate funding promises to the LDCs made at the Copenhagen Summit in 2009 were not kept. Do you feel confident that this time it will be different?

It was in Copenhagen that developed nations committed to a goal of jointly mobilising $100 billion a year by 2020 to address the needs of developing countries. The LDCs see Lima as the place where climate finance will be delivered with clarity on the post Fast Start Finance efforts for climate finance mobilisation. In Lima, we hope to witness bold financial pledges to the main funds that support financing of the climate actions of LDCs: the Least Developed Countries Fund (LDCF), the Adaptation Fund, and the Green Climate Fund. Lima is the place for developed countries to scale up finance in a way that demonstrates their resolve to fulfill their commitment of providing $100 billion per year by 2020.