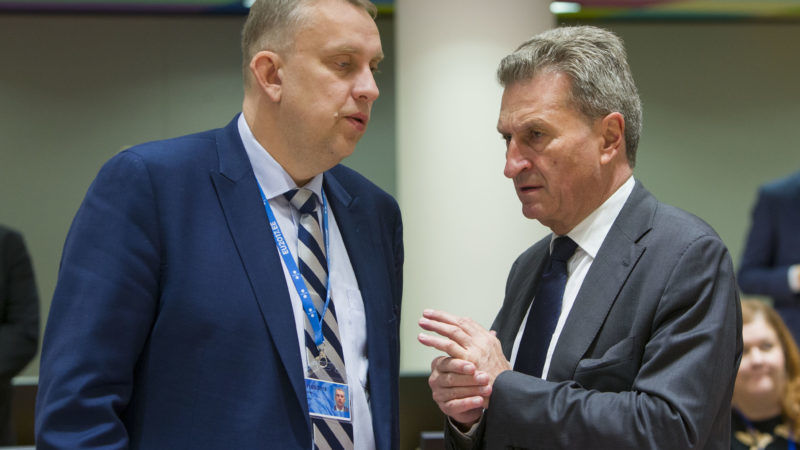 Deal! We have just agreed on the new #EUBudget: Our priorities for 2018 #Growth, #Youth #Security #Migration. Thanks to @Europarl_EN + @EUCouncilPress 4 good discussions. Press statement: https://t.co/KLp1Mco2zx pic.twitter.com/mjLx5xwOga

Finance Ministers rejected the European Parliament’s proposal to increase external spending and agreed to limit funding at €9.57bn, a decrease of €868m, or 8%, below the final 2017 budget, with €256m left unallocated in the margin.

Compared to 2017, long-term development aid was cut by 6%, however health and education funding will increase to €206m and agriculture, food security and nutrition funding will rise to €217m in 2018. The agreement also outlines a slight increase from 2017 to humanitarian aid, to €1.1bn.

“We have strived this year to maximise the impact of EU spending, whilst maintaining sufficient leeway to be able to react to unforeseeable needs,” said Märt Kivine, deputy finance minister of Estonia and chief Council negotiator for the 2018 EU budget. “The 2018 budget focuses strongly on priorities such as boosting economic growth and job creation, strengthening security and addressing the challenges posed by migration.”

We did a decent job, methinks. Thorough and disciplined through the night #EUBudget2018 https://t.co/dSPqUy60tn

Valentina Barbagallo, Brussels Policy and Advocacy Manager at ONE, said that despite approving small increases to crucial areas such as health, education and nutrition, “the EU has once again prioritised quick fixes and failed to see the big picture”.

16h of negotiations on #EUBudget2018 and a final deal lacking any vision. Read @ONEinEU & other CSOs reaction ——>> https://t.co/fh0N5uX2gn

“The agreement leaves much needed funds for poverty eradication unallocated and potentially earmarked for member states’ political priorities in the EU’s neighbourhood. This paints a very worrying picture in the lead up to the negotiations of the next EU’s Multiannual Financial Framework. By 2050 Africa’s youth will be ten times the size of the EU’s. The EU urgently needs to realise that investing in long-term development is investing in Europe’s prosperity and stability,” Barbagallo stated.

Hilary Jeune, Oxfam’s lead policy advisor on development cooperation, said: “The EU is clearly no looking at the real needs of people facing urgent situations. It has adopted tunnel vision and is looking only at its own security priorities as it cuts funds that help people get out of poverty and recover from crises.”

REACTION: NGOs slam #EUBudget2018 for stepping back on #globaldev aid that should help people most in need https://t.co/AM7Rzui5K8 pic.twitter.com/Ct9vTXlSCL

Jacqueline Hale, Head of Advocacy at Save the Children, said: “Children growing up poor, or affected by conflict and disaster have lost out in this budget – especially those outside the EU’s immediate neighbourhood. The EU’s retreat to regionalism flies in the face of its global commitments and puts at risk the principle that aid should go to those most marginalised, and most in need.”

Children growing up poor, or affected by conflict and disaster have lost out in this #EUBudget2018– especially those outside the EU’s immediate neighbourhood https://t.co/bMwosKVfgv

Tanya Cox, Plan International’s EU Representative, said: “Plan International deeply regrets that the budget agreed on yesterday will see cuts in EU’s development and humanitarian aid, which goes against EU citizens’ clearly expressed wishes. These cuts take money away from the poorest and most marginalised in order to fulfil the EU’s misplaced migration control measures. The EU committed to lead in implementing the sustainable development agenda, ensuring gender equality and supporting people in crisis. However, with this decision, the EU’s ability to deliver on those commitments and ensure that no one is left behind will be limited in 2018.”