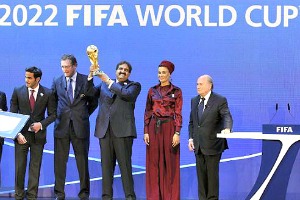 EXCLUSIVE / A call has gone out for the international community to shun the 2022 World Cup in Qatar unless it reforms its indentured labour practices on the Unesco International Day for Remembrance of the Slave Trade (23 August).

Almost 21 million people around the world are victims of forced labour according to the International Labour Organisation, but Emir al-Thani’s Gulf Emirate has a particularly poor record.

Evidence is increasing of forced labour in the Qatari construction industry responsible for building the World Cup infrastructure for 2022, Aidan McQuade, the director of Anti-Slavery International told EURACTIV.

“If that is borne out I think it would be an extremely sad state of affairs,” he said.

“It would be a dreadful pity and an enormous shame on all of us if we are prepared to participate in a world cup that has been brought to us by slavery.”

In April, the Qatar 2022 Supreme Committee announced that it had devised a ‘workers charter’ to protect labour rights. But its details were not shared with the public or trades unions, leading the International Trades Union Confederation (ITUC) to profess itself “very disappointed”.

"Without genuine legal protection and union rights, more workers will die building the World Cup stadiums than players will play in the World Cup itself," ITUC's secretary-general, Sharon Burrow said.

Qatari government statistics indicate that some 1.2 million migrant workers make up 94% of the workforce. That percentage will grow as a million new foreign workers are expected to arrive in Qatar over the next decade to help build 12 new stadiums, new rail and subway networks, hotels, and a complete new city to house 200,000 people at a cost of over €75 billion.

Native Qataris only make up 12% of the country’s population, which last year grew 5% because of an influx of foreign workers in the booming construction sector, Human Rights Watch says.

Yet polls for Qatar University suggest that only half of the country’s migrant blue-collar workers sign contracts before coming to Qatar. A quarter of those who have signed such deeds said that they had not been honoured.

Employers must assume legal responsibility for providing their workers with jobs, work visas, housing and often food in the Gulf state. Workers cannot change jobs, leave the country, rent a home, or open a bank account without their employer’s permission.

Such conditions may easily dovetail with Unesco’s definition of ‘modern forms of slavery,’ particularly where domestic workers are concerned, many of whom have been deceived by traffickers in Asian countries such as India, Bangladesh, and Nepal.

“Two hundred years ago, people used the whip to keep slaves in their place, today they use the confiscation of identity documents,” McQuade said.

Anti-Slavery International proposes a multi-track approach to dealing with the problem, involving:

“Slavery has remained a marginal issue in aid, trade and diplomatic policy for hundreds of years now and has consequently been able to thrive in many parts of the world, the richest as well as the poorest,” McQuade said.

“We haven’t even seen slavery addressed as a post 2015 Millennium Development Goal, that’s how far off the radar it is in terms of the most influential policy-makers,” he added.

Human rights defenders say they are concerned that the EU still grants Uzbekistan preferential trade privileges despite calls for a cotton boycott of the central Asian state, because of its estimated one million forced labourers.

But European apathy about forced labour in the Middle East – compared to its engagement with the Arab Spring – could also have another cause, according to James Lynch a spokesman for Amnesty International.

“It is awkward for Western countries who are promoting their businesses in the Gulf to talk about the rights of migrant workers who may be employed by westerners,” he told EURACTIV. “There has to be a discussion about this.”

The United Nations Educational, Scientific and Cultural Organisation (Unesco) chose 23 August to celebrate the International Day for the Remembrance of the Slave Trade and its Abolition to pay tribute to the Santo Domingo uprising which took place in the islands now known as Haiti and the Dominican Republic on that day in 1791.

The revolt, which actually began on 22 August, shook the slave system and provided an irreversible impetus for the process which would eventually lead to the abolition of the transatlantic slave trade.