As EU aid ends in Indonesia, communities take over 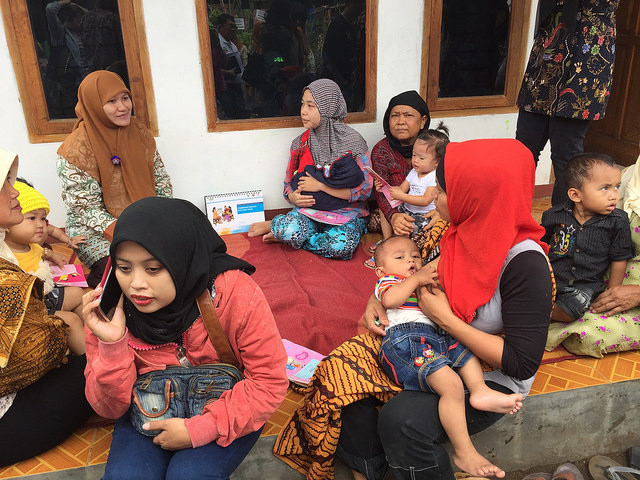 In 2019, the European Union will terminate a number of its health support programmes in middle-income countries, including in Indonesia. This will put a lot of pressure on the archipelago’s healthcare system, which is heavily staffed by volunteers. EURACTIV reports from Jakarta.

More than 28 million in Indonesia still live below the poverty line. And although the economy is growing, the benefits are mainly going to the emerging middle class, deepening existing inequalities.

The government is already struggling to coordinate healthcare for a population spread across more than 6,000 islands, and continues to grapple with high rates of preventable and treatable diseases.

For instance, Indonesia has one of the highest rates of tuberculosis in the world and has the fifth highest number of children suffering from chronic malnutrition, with about 8.8 million children who are stunted.

Despite these alarming figures, in January 2014, the EU decided that the development aid given to Indonesia should focus on other sectors such as education, justice and finance.

In order to meet future healthcare challenges, with help from the World Bank, the Indonesian government introduced several initatives.

The most visible is a large-scale community-development scheme, which is currently witnessing its first successes in fighting malnutrition in the Southeast Asian country’s poorest areas.

Launched in 2007, the PNPM Generasi programme gives incentivised block grants to poor, rural communities. The programme takes the idea of conditional cash transfers and repurposes it to enable communities and local health and education providers to work together on targeting three Millennium Development Goals (MDGs): maternal and child health, and universal primary education.

Generasi builds on the KDP programme, a 15-year old plan by the Indonesian government, in which block grants were given directly to poor communities to determine for themselves how to use the funds, whether for infrastructure, health or education opportunities. During these 15 years, the plan helped bring half of the country’s 70,000 villages out of poverty.

The Generasi programme is currently active in eight provinces, including the West Bandung District, which consists of 165 villages with a population of about 1.5 million people, where 20% lives below the poverty line. In the Cihampelas village, less-affluent families can seek counseling on maternal and child health, family planning, nutrition and immunisation. Many of the healthcare counselors are caters: volunteers with faith-based organisations.

One cater told EURACTIV that she often teaches young mothers how to cook healthy meals for their children, “because many of these mothers serve their children chocolate bars. They don’t know how important healthy food is”.

This is significant, as only 37% of Indonesian children consume a minimum of acceptable diets; 14% of children have suffered diarrhea in the last two weeks; only 42% are breast fed exclusively for the first 6 months of their life; and 12% live below the poverty line.

In Cihampelas, families are also taught how to grow their own fruit and vegetable gardens with cucumbers, papaya, bananas and nuts. One cater said that for most families in the village, 90% of their diet now comes from their gardens.

23-year-old Sofi Awati, who is pregnant with her second child and has one five-year old son, has used the Cihampelas health community to get both free tuberculosis vaccines and to learn how to cultivate such a garden. “My son now likes the food that I cook,” she said.

The children who live in Cihampelas not only benefit from the health services. In a two-room, bright-coloured house which is used as a one classroom school, they receive free primary school education from two volunteers who formerly worked as teachers, while their mothers are taught the importance of getting an education in the other room.

But most importantly, Cihampelas has its own Posyandu, an integrated village health post, which serves as first line of care for many Indonesians. Among other things, they register births, weigh babies, maintain growth charts and immunisations.

19-year-old Vani, who is seven months pregnant with her first child, dropped out of high school when she married her husband in March last year. She told EURACTIV that she regretted dropping out and wants to go back to school after giving birth so that she can get an education and the family can live on a bigger budget.

Vani said she wants to give birth in the home that belongs to the Cihampelas’s local midwife, Ebulili, instead of having to walk to the local hospital. She added that the price of giving birth also plays a part: While she would have to pay Ebulili 700,000 Indonesian Rupiah (€ 49), the hospital would charge her 2 million Rupian (€ 140) ‘for a birth without complications’.

In Generasi’s latest impact evaluation, its biggest impact was cutting malnutrition and stunting. Childhood malnutrition was reduced by 2.2 percentage points, or nearly 10% over the control group in areas where Generasi was implemented.