An Afghan child making bricks in Qasem Abad, on the outskirts of the Iranian city of Varamin, in Tehran province. [Abedin Taherkenareh/EFE-EPA]

Despite the pressure on refugees to leave Iran with repatriation campaigns from agencies such as the UN’s High Commissioner for Refugees (UNHCR), Afghans find it difficult to return to a country ravaged by a series of conflicts since the Soviet invasion in 1979.

In 2016, Afghanistan was ranked second worldwide, behind Syria, in terms of the number of refugees it generated.

The UNHCR had recorded more than 2.5 million Afghan refugees, the vast majority in neighbouring countries: There are a million in Iran, and 1.4 million in Pakistan. In Europe, Germany leads the way with a total of 43 000 Afghan asylum seekers.

More and more of Germany’s regions are halting the deportation of rejected asylum seekers to Afghanistan, as the situation in the conflict-torn country worsens. Euractiv Germany reports.

In Iran, no less than two million Afghan refugees have no residence permit.

Recently, the Iranian government launched schooling programmes for Afghan children (particularly for those who do not hold a residence permit), programmes to officialise unregulated migrants and make residence requirements less strict.

“We want the children to be able to go to school, to have employment opportunities”, said Cornelia Ernst, MEP of the GUE/NGL [the European United Left-Nordic Green Left], to the Spanish press agency Efe. She is a member of the delegation for relations with Iran, chaired by Januzs Lewandowski, who visited the country during one of the regular interparliamentary meetings between Iran and the EU.

Following their meeting, the delegation visited one of the registration and health centres for Afghan refugees in Isfahan, in the centre of the country.

The European Union, which has been funding humanitarian projects in Iran since 1997, has allocated €10 million channelled through NGOs and UN agencies, to help Afghan refugees living in the country.

The aid is intended for the schooling of Afghan children in Iran, medical assistance and food security. It is also used to help refugees pay for medical insurance and provide access to legal advice.

In the Isfahan health centre, MEPs checked the quality of outpatient care. They also had the opportunity to speak with Afghan doctors and nurses as well with the people in charge of the centre, which is run by the Iranian government and the UNHCR.

The Iranian government has taken steps to include all legally resident Afghans in the national health system. Vaccination campaigns for children are frequent, especially against polio. Afghanistan and Pakistan are the only countries in the world where the disease is still endemic.

Ali Khamenei the current Supreme Leader, issued a decree in 2015 to allow Afghans, both legally and illegally resident, to study in Iran’s public schools. In 2016, 48,000 illegally resident Afghan children were enrolled in school for the first time, and this year the number reached 400 000.

In 2002, Iran set up a voluntary repatriation programme with the support of the international community and a cooperation between the government, the UN, and donors.

In November, the Iranian government called on William Lacy Swing, the director general of the International Organisation for Migration, who was visiting the country at the time, to help Afghans return to their home country.

Abbas Araghchi, Iran’s deputy foreign minister, called for the international community to contribute to improving the security and economic situation in Afghanistan, and to therefore better prepare the refugees for their return to the country.

However, Cornelia Ernst does not consider the return of Afghans to their country a viable solution: “repatriation is not the solution”, as Afghanistan “is not a safe country”.

Still, she believes it is necessary to improve their living conditions in Iran, as the issue of refugees illegally residing in the country is still “unresolved”. Afghans therefore have to face important obstacles, such as a limited access to basic services, and employment.

Most of them have no other alternative but to settle for small, low-wage jobs that require few qualifications, such as construction workers or parking attendants. In Qasem Abad, on the outskirts of the city of Varamin, brick makers work 14-hour shifts for a daily wage of $10. Furthermore, they can only work six months a year, during the hot season.

Their access to the labour market is however facilitated by their freedom of choice of the place of residence. Some 97% of Afghan refugees live in urban areas, 33% of them in the Tehran province and only 3% live in refugee camps.

Comparisons with the situation in Europe

Janusz Lewandowski, a member of the EPP, welcomed Iran’s benevolence towards Afghans as a “humanitarian measure in response to the human disaster in Afghanistan”.

“Helping refugees is a good thing. We want to help, but we don’t think welcoming all refugees to Europe is the best of ideas”, added Cornelia Ernst.

The number of refugees in Iran is staggering: three million in a population with less than 83 million people. Furthermore, the country faced many setbacks over the last 40 years: the Iranian revolution (1979), war with Iraq (1980-1988) and years of international economic embargo.

Comparisons with the situation in Europe were inevitable during the visit of the delegation. The delegation also held talks with Mohammad Javad Zarif, Iran’s Foreign Minister and Ali Larijani, President of the Islamic Consultative Assembly of Iran.

Flavio Zanonato, a member of the Progressive Alliance of Socialists and Democrats group in the European Parliament (S & D), admitted that the welcome extended by Iran was “positive” and that the country has played host to many more refugees than Europe.

“Refugees, asylum seekers, arrive in such numbers in Iran that we cannot imagine the situation in Europe. In Italy, there are 250,000 refugees and we already say that it is disproportionate when there are three million over there, “added Flavio Zanonato. 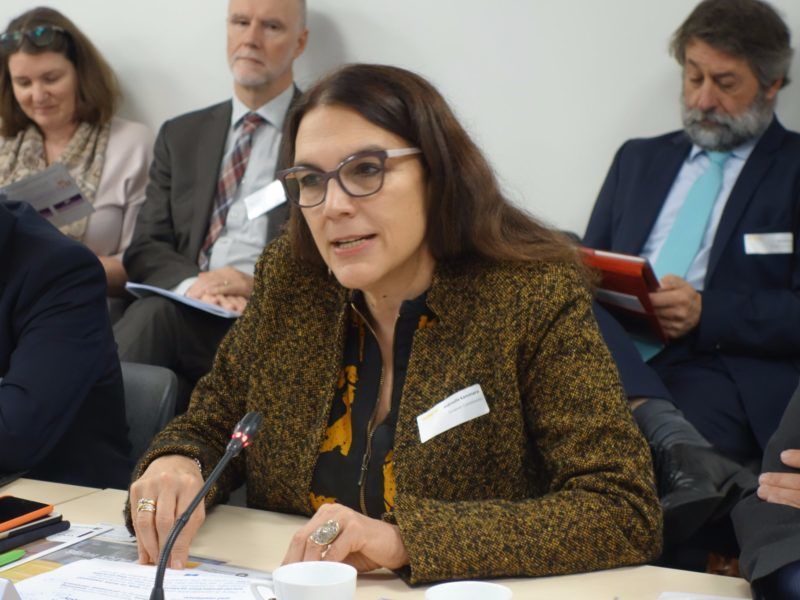