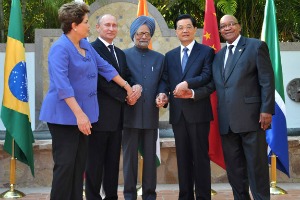 The grouping of the emerging economies – Brazil, Russia, India, China and South Africa (BRICS) – are cutting their foreign currency reserves in euro, having sold €45 billion of the currency in 2012, according to data gathered by the International Monetary Fund.

After the cut, the euro represents just 24% of the BRICS foreign reserves, the lowest level since 2002 – the year when euro coins and banknotes first entered circulation – and down from a peak of 31% in 2009, according to reports in the financial press.

Leaders of the BRICS nations met at a financial summit in South Africa from 26 to 28 March. Officially, the central theme of the meeting was “BRICS and Africa: Partnership for Development, Integration and Industrialisation”.

The Russian TV channel RT reported that the ‘big five’ of the developing world agreed to create their own version of the World Bank at their fifth annual summit in Durban.

The move is portrayed as being linked to the developing world’s disillusionment with the status quo of world financial institutions. The World Bank and IMF continue to favor US and European presidents over BRICS nations, and in 2010, the US failed to ratify a 2010 agreement which would allow more IMF funds to be allocated to developing nations.

"Not long ago we discussed the formation of a developmental bank… Today we are ready to launch it," South African President Jacob Zuma was quoted as saying.

Once a loose political affiliation, the BRICS bloc is now a serious economic contender in the world economy, representing 40% of the world’s population, and accounting for one fifth of global GDP.

The five countries hold foreign-currency reserves of $4.4 trillion (€3.4 trillion), and need an institution to safeguard this amassing wealth. The reserve will also protect members from short-term liquidity volatility and balance-of-payment problems.

But the summit produced only modest results for the time being, despite the high-level delegations present in Durban, which featured the president or prime minister of each nation, including Russian President Vladimir Putin and Chinese President Xi Jinping.

One long-running speculation was that the BRICS nations would ultimately want to form their own currency as an alternative to the U.S. dollar and the euro. This could reduce demand for the dollar as a reserve currency, which could lower the dollar's value relative to other currencies.