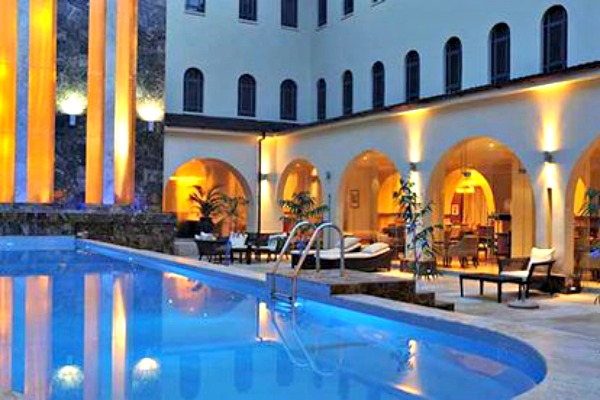 The CDC’s investments include the Protea Ikeja hotel in Lagos, Nigeria, where rooms start at $400 a night (photo: Protea)

Millions of pounds of British aid money to tackle poverty overseas have been invested in builders of gated communities, shopping centres and luxury property in poor countries, the Guardian newspaper has revealed.

CDC, the little-known investment arm of the British aid programme, has invested more than $260m (£154m) in 44 property and construction companies in Latin America, Africa and Asia.

At least 20 of these are hotels, shopping centres or companies that build or manage gated communities and luxury property, according to Guardian research.

CDC, formerly the Commonwealth Development Corporation, says these investments will create thousands of jobs for poor people in construction and services. But leading British NGOs questioned how supporting upmarket property could be an acceptable use of UK aid money.

Among CDC’s luxury investments are:

• In Mauritius, more than $24m has gone to a developer whose portfolio includes a 170-hectare “aspirational ocean lifestyle village“, with luxury beachfront homes from $500,000 and an elite boarding school managed by the Berkshire-based Wellington College.

• In India, one CDC-backed business has developed what it describes as “South Asia’s first truly international luxury apartment project”, home to “a Forbes billionaire, prominent entrepreneurs, CEOs, directors and chairmen”.

The ringfenced UK development budget has come under increased scrutiny as the government has met its target of spending 0.7% of gross national income as aid. Coalition ministers have pushed for increased private investment as a central plank of British aid policy.

Nick Drearden, director of the World Development Movement, accused the government of exporting a “highly financialised, highly unequal, highly ideological form of ‘development’ which helps big business, not ordinary people”. “If you live in a slum in Nairobi, seeing development money pouring into a luxury block of flats is an insult.”

A CDC spokesman defended its investments, saying it had worked closely with development academics and economists to identify sectors with the highest job creation potential. “Construction was identified as a priority sector that creates large numbers of low and semi-skilled jobs that are typically open to the poorest people in developing countries.”

Wholly owned by the Department for International Development (DfID), CDC invests in private companies with the stated aim of reducing poverty in developing countries. Its investments count as aid and DfID is its sole shareholder.

CDC has investments in construction and property across sub-Saharan Africa from Ghana to Zambia as well as in India. Many projects appear to cater to the elite.

A glossy brochure for Garden City in Nairobi, which includes 400-plus flats and townhouses, boasts: “From the aquamarine water of the heated swimming pool to the ultra-modern fitted kitchen, solid bamboo flooring and glass balcony balustrades, quality is the defining characteristic of the Garden City Village.”

A brochure for Azuri, a development for the CDC-backed Indian Ocean Real Estate Company, invites would-be residents to “Close your eyes and imagine yourself breathing in the warm Indian ocean breeze, absorbing all that the Mauritian lifestyle has to offer.”

Opposition politicians questioned the investments in upmarket property. Jim Murphy, shadow secretary for international development, said: “CDC was established to help foster growth and tackle poverty. It is hard to see how funding luxury apartments and gated communities is the most effective way to do either.”

The CDC argues that its mission is to support the building of businesses to create jobs in Africa and south Asia. It says its investments employ more than a million people across 1,301 businesses in some of the world’s poorest countries, and in construction its investments provide direct jobs for more than 9,000 people.

A DfID spokesman said: “Individual investments are fully decided by CDC and the government has put in place strict rules which require commitments to deliver jobs, economic development and poverty alleviation in developing countries.”

CDC says it has not received new money from the public purse since 1995, and instead recycles money made from selling off older investments. It still has £765m of taxpayer money on its books, however – the result of outstanding loans being converted to share capital in 2004.

In 2013, construction and real estate accounted for 6.8% of CDC’s portfolio. Infrastructure was the top sector (25.2%) followed by financial services (13.6%). Some of the investments in CDC’s portfolio will have been made before its new 2012 strategy.

In addition to upscale residential developments, CDC has millions invested in shopping centres across sub-Saharan Africa, including the huge Jabi Lake mall in Abuja, Nigeria,which aims to “meet the desires of sophisticated Nigerians wanting a compelling retail experience with leisure facilities and high-quality brands”.

In Nigeria investments also include two Protea hotels – part of a chain recently bought by Marriott International – including one in Lagos at which rooms booked online start at $400 a night.

The Guardian’s findings come amid increasing concern over rising inequality in the world’s urban areas, where more than a billion people are estimated to live in slums.

In an interview with the Guardian the UN’s housing chief, Joan Clos, said: “When this unfairness takes root in the population, it can create a sense of fear, a sense that we don’t trust each other.

“The outcome is that the urban pattern becomes more segregated, more differentiated. This is not socially admirable or economically productive.”

In Kenya, Dereje Alemayehu, Christian Aid’s east Africa country manager, said hotels and shopping centres could not be considered neglected economic sectors. “There are already more than enough such facilities for tourists, expats and the relatively large national middle class.”