Cancer is the poor parent of development aid 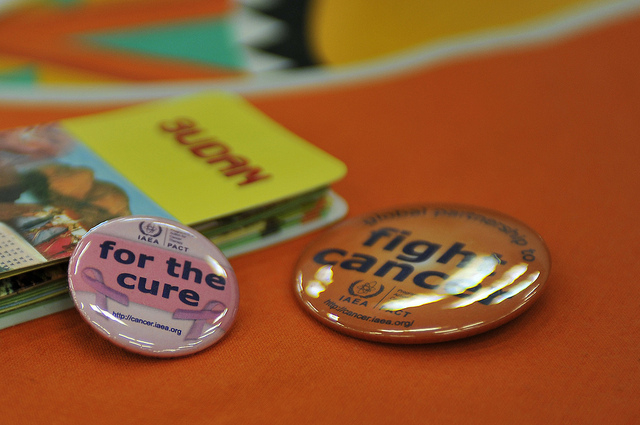 Buttons from “PACT: Africa Rising to the Challenge of Cancer.” Hosted by the African Group in Vienna. [IAEA/Flickr]

This article is part of our special report Fighting diseases: The challenges ahead.

SPECIAL REPORT: Long considered a disease of rich countries, cancer is no longer sparing Africa, where, to general indifference, the number of deaths is soaring.

The absence of prevention, poor infrastructure, lack of medical staff,  and late diagnoses, but also an increase in life expectancy in low-income countries, have made cancer Africa’s new health scourge.

“Cancer has long been considered a disease of rich countries, for the simple reason that one must live long enough to get cancer,” said Pierre Bey, Director of the International Network for Cancer Treatment and Research (INCTR).

With the increase in life expectancy in many African countries with low incomes, and the development of the Western way of life, new health phenomena have become commonplace. Still affected by the AIDS pandemic, African countries are facing the rise of cancer.

In 2012, the World Health Organization (WHO) identified 14.1 million new cancer cases and 8 million deaths worldwide, mostly occurring in developing countries. These proportions will rise further in 2030, when WHO expects 22 million new cases.

“About 70% of cancer deaths worldwide occur in developing countries. Many of these deaths could be avoided if the right equipment and experienced professionals were available,” says  Yukiya Amano, the director general of the International Atomic Energy Agency (IAEA).

In Africa, the data remains fractional, since many countries do not have reliable systems for the collection of health data. But in 2012, the WHO estimated 645,000 cases of cancer, including 456,000 which were fatal.

“A cancer such as the retina, or rétinoplasmose has healing rate of 100% in France, while in sub-Saharan Africa it is cured in 20% of cases,” said Pierre Bay.

Despite the magnitude of the problem, the answers are not forthcoming. “The awareness of sub-Saharan African states that cancer will become the main public health problem in 20 or 30 years to come is very limited,” Bey states.

The lack of investment in health policy is real. In 2001, African countries pledged at the Abuja Declaration to allocate 15% of their GDP on health care, but in fact they spend an average of 3%. And the primary targets remain HIV/AIDS, malaria and tuberculosis.

As for developed countries, who are public aid providers to development, the fight against cancer is also left behind, the priorities being the fight against pandemics such as HIV/AIDS, tuberculosis, malaria or even the Ebola crisis.

“There is little room in international programs for the fight against cancer,” Bey admits.

In France too, official development assistance dedicated to health is mainly intended to the fight against pandemics and strengthening the health systems of developing countries.

Consequently, only 5% of the world’s resources against cancer are spent in developing countries, according to the Global Task Force on improving access to treatment and monitoring of cancer.

2 oncologists to 16 million people in Mali

The lack of structures and qualified personnel leads to very late diagnosis and hospitalisation, resulting in high mortality rates.

In a country like Mali, there are only two oncologists for a population of 16 million. The proportion is similar in a number of countries in the region. Despite the establishment of a national policy against cancer in 2009, Côte d’Ivoire also has only a handful of oncologist serving a population of 21 million.

Yet, in spite of the weakness of local health systems, some cancers are preventable.

“We must focus action on curable cancers, such as children or young adults, or cervical cancer,” says Bey.

With 528,000 new cases each year, cervical cancer is the fourth most common cancer in women worldwide, especially in sub-Saharan Africa. In the region, the disease is diagnosed in 34.8 women per 100,000 and the fatality rate exceeds 65%, while it is only 26% in North America, according to the International Agency for Research on cancer.

“By developing vaccines against HPV [human papilloma virus] and putting in place a more systematic screening and inexpensive, it would be possible to eradicate this cancer,” Bey states.