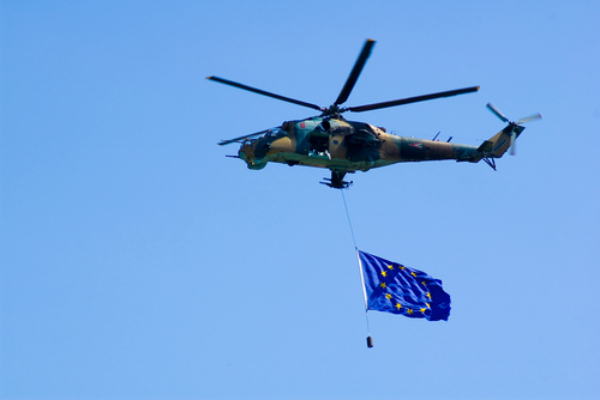 The conflict in the Central African Republic could have presented an opportunity for governments to pool defence resources but the issue has hardly been raised at the EU level. Leaders are meeting in Brussels today (19 December) to discuss defence and security.

EU leaders are discuss pooling resources in security in defence during the two-day summit.

The European Union has a fast and efficient humanitarian, political and financial response system but the situation is very different on military matters.

Progress on defence cooperation has slowed, as it is not deemed a priority by many member states, including the UK, which opposes the prospect of yielding military powers to Brussels.

The EU has never succeeded in fully putting in place the 2000-man European rapid reaction force. However, the military response team, which is led in turn by each member state, has been operational since 2007.

The severity of the crisis in the Central African Republic is well known among European circles.

“A genocide scenario is not purely hypothetical,” warned the commissioner in charge of humanitarian aid, Kristalina Georgieva, who visited the country twice over the past months. Faced with this “forgotten crisis”, as she describes it herself, Europe has not remained inactive.

The EU has just released €18.5 million to fund humanitarian aid in the country, in addition to the €20 million already unblocked this year. European countries also showed a united front inside the UN Security Council in drafting and adopting two resolutions to allow both the use of force and the strengthening of the African forces.

Without it the African-led ?International Support Mission to the Central African Republic (MISCA) would have been “very difficult to deploy”.

But despite this kind of EU cooperation, the deployment of the European rapid reaction force did not succeed. The UK, which is heading the force this semester, refused to commit troops to Central Africa, supported in this by the Netherlands and Baltic states.

EU High Representative for Foreign Affairs Catherine Ashton, who is also the British member of the college of commissioners, has tried to avoid a crisis with London ahead of the summit in Brussels. Even the new concept of using battle groups in a modular way, by using only air forces for example, was rejected.

“We have not received any request from France”, a senior EU diplomat said. This led Paris to request help from countries individually. The UK answered “yes” to the French request, but also Germany, Belgium and Spain. Poland could decide to do so soon.

The French minister for foreign affairs, Laurent Fabius, said on 17 December that Belgium and Poland were about to give concrete support to the operation.

The separation of military action reveals the ambiguity behind European defence policy. Deployment depends strongly on both the military capacity and the finances of the member states.

The European Security and Defence Policy (ESDP) receives almost a unanimous support on paper, but in times of fiscal restraint, things get more complicated.

The decrease is expected to continue, according to Claudia Major and Christian Mölling of the German institute for international policy (SWP). European defence budgets could fall from €220 billion to €147 billion in ten years. The authors of the reports denounce the tendency to have what they call “bonsai armies”, forces just to make up the numbers.

EU leaders are expected to discuss such defence matters during the Council, and the propect of closer coordination of military responses to global threats, many of which are shared between member states.

“In a world that is increasingly changing, the EU is expected to have growing responsibilities in maintaining peace and international security,” the draft conclusions of the summit say.

Leaders are also expected to recall the need to “improve the availability of capacities” such as having an “integrated, sustainable, innovative and competitive” industrial and technological military base.

This is the maximum that seems possible at this time in operational terms.

Use it or lose it

EU leaders are expected to submit several ideas for the future at the summit, such as making EU peacemaking missions more quickly deployable, by drawing on a pool of experts and improved financial oversight, for example.

In military matters, no concrete proposal is expected yet, except one French idea. The French president, François Hollande, wants to propose the creation of an EU fund to finance peacekeeping operations. This is seen as a revolutionary idea, which if accepted, would mark the beginning of a reflection.

“This fund will not be created on Thursday,” said a French diplomat. “The objective is to generate a debate and to have a mandate to study its creation.” The diplomat expected more concrete action in the first half of 2014.

The challenge for Europe is to find a way to make use of its disparate military capabilities or as the Dutch minister for defence, Jeanine Hennis-Plasschaert said, they can “use it or lose it”.

Hannes Swoboda, leader of the Socialists and Democrats group in the European Parliament, told EURACTIV that the declaration of the St. Malo  defence summit of 1998 had not been followed up with concrete steps to fit their armies into a common project, and at leas make sure that their armaments are compatible.

The next step that he said need to be done is that leaders start thinking about a comprehensive defence and security plan from Europe, what the priorities should be, how the decision-making should be  done, in order to get the EU member countries around the table.

“An effective foreign policy needs an effective security and defence policy and that is till missing. We know that things in Europe move very slowly, but in this case they go very slowly”, he said.

Asked what would happen if the UK choose for internal political reasons to block any EU plans, he said:

“We cannot force any country. And if the UK is no participating, the other countries should move forward. I think it is very important to show that Britain cannot block it”, he said, referring to the European Security and Defence Policy (ESDF).

“If Britain wants to stay out with the Cameron government – OK, but Cameron will not stay there forever. Don’t use always Britain as an excuse not to go forward,” he added.

The EU executive set up a task force on defence industries and markets, outlining that more than 1,350 SMEs are

present on the European defence sector. It re-launched its attempt in July 2013, with a follow up Communication on defence and industrial policy.