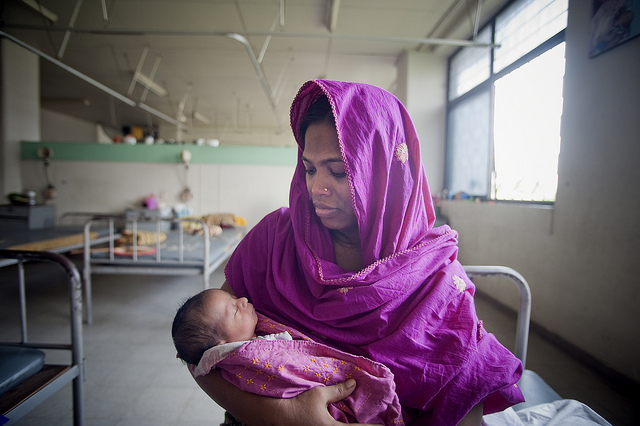 Woman and child in Bangladesh [[United%20Nations/Flickr%5D]

A European Citizen’s Initiative (ECI) has called on the EU to stop funding abortion in developing countries. The European Commission has dismissed it outright. EURACTIV France reports.

The EU’s executive stuck to its guns and refused to limit direct or indirect European finances for abortion in developing countries. The EU is the number one aid donor in the world and differs from the United States, where funding for abortion is not permitted in development aid.

The rejected demand was presented by a citizen initiative called One of Us, which has collected over one million signatures across seven EU member states. This is the requirement allowing them to call on the European Commission to propose legislation on the matter.

The One of Us initiative concerns the “juridical protection of the dignity, the right to life and of the integrity of every human being from conception in the areas of EU competence in which such protection is of particular importance.”

“To ensure consistency in areas of its competence where the life of the human embryo is at stake, the EU should establish a ban and end the financing of activities which presuppose the destruction of human embryos, in particular in the areas of research, development aid and public health,” said the organisers of One of Us.

Despite the clear democratic legitimacy of the petition, which has been signed by almost two million European citizens, the Commission has point blank refused the initiative.

“The underlying objective of the Citizens’ initiative is a reduction in the number of abortions undertaken in developing countries,” stated the Commission in a press release published on 28 May.

According to the Commission, the funding ban demanded by the initiative “would constrain the Union’s ability to deliver on the objectives set out in the MDGs, particularly on maternal health.”

From 2008 to 2012, the EU dedicated approximately €1.5 billion to maternal, neonatal and infantile health.

The UN’s Millennium Development Goals (MDGs) aim to eliminate extreme poverty and hunger, guarantee primary education to all and promote gender equality and the empowerment of women by 2015.

One of the goals is to improve maternal health and aims to reduce maternal mortality by 75% from 1990 to 2015.

Unsafe abortions are an important cause of maternal mortality and account for 16% of deaths, or 47,000 deaths each year, almost all of which occur in developing countries.

Development aid plays a complicated role in family planning policies. Europeans have always struggled to agree on abortion. Abortion is not legal in Poland and Ireland, and Spain is taking steps to restrict access.

Abortion care should be set within the legal framework of each country. Although just six countries in the world refuse abortion in order to save the life of a mother (Salvador, the Vatican, Malta, Chile, Nicaragua and the Dominican Republic), numerous countries criminalise abortions at all times, according to the UN’s World Abortion Policies 2013.

In the US, the relationship between abortion and development aid is an extremely sensitive issue.

The American agency for International Aid (USaid) mirrors this. All funding is subject to the Helms Amendment, which states that “no foreign assistance funds may be used to pay for the performance of abortion as a method of family planning or to motivate or coerce any person to practice abortions”.

USaid interprets this amendment to prohibit all funding which favours abortion policies in developing countries, even if abortions are legal within the country.

The European Citizens' Initiative (ECI), as introduced by the Lisbon Treaty, allows citizens to request new EU legislation once a million signatures from seven member states have been collected asking the European Commission to do so.

Article 11 of the 2009 Lisbon Treaty says "not less than one million citizens who are nationals of a significant number of member states may take the initiative of inviting the European Commission, within the framework of its powers, to submit any appropriate proposal on matters where citizens consider that a legal act of the Union is required for the purpose of implementing the treaties".

European Citizens’ initiative “One of Us”