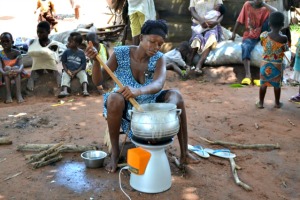 Simple measures to reduce pollution from cooking stoves in developing nations could save a million lives a year and help slow global warming, a World Bank study showed today (4 November).

Tighter restrictions on diesel emissions, for instance from car exhausts, could also avert 340,000 premature deaths annually by reining in soot and other heat-trapping pollutants that are also stoking climate change, it said.

The study called for tough limits on pollution from methane and soot, which can settle on snow and ice and hasten a thaw by darkening the surface, in everything from cooking and heating to mining and flaring by the oil and gas industry.

"The damage from indoor cooking smoke alone is horrendous – every year, four million people die from exposure to the smoke," World Bank President Jim Yong Kim said in a statement of the study, called ‘On Thin Ice: How Cutting Pollution can Slow Warming and Save Lives’.

Many people in developing nations cook on open fires with wood or coal, exposing women and children in particular to fumes that cause everything from respiratory problems to heart disease.

"If more clean cook-stoves – stoves that use less or cleaner fuel – would be used it could save one million lives," the report said of the annual benefits.

Mass produced, such stoves can cost a few dollars each.

The paper was co-written by the International Cryosphere Climate Initiative – the cryosphere is the world's ice, snow and permafrost from Siberia to Antartctica.

New stoves use fans to improve combustion, or less-polluting fuels such as gas from crop waste or manure.

"If we act fast and cut common pollutants like soot and methane we can slow the rate of warming…and if we did so we can save millions of lives," Rachel Kyte, World Bank vice president for sustainable development, told a telephone news conference.

Tighter controls on pollution could also boost crop growth, the report said. Plant growth can be hampered by a haze of pollution.

A 2011 UN study estimated that measures to limit air pollutants such as methane and soot could slow the pace of global warming by 0.5 degree Celsius (0.9 Fahrenheit) by mid-century.

A study in August 2013, however, said benefits would be far less. Temperatures have risen by about 0.8 C (1.4 F) since before the Industrial Revolution.

Almost 200 nations will meet in Warsaw from November 11-22 to consider ways to combat global warming. They have agreed to work out by the end of 2015 a deal that will enter into force from 2020.