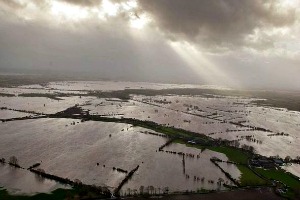 A campaign by the UK Independence Party (UKIP) and the Daily Mail newspaper to divert Britain’s overseas aid budget into domestic flood relief has been condemned as “disgraceful” by Lord Deben, the former Conservative environment minister known as John Gummer.

Aid agencies, MEPs and officials from the EU and UN also told EURACTIV that such a move would breach Britain’s international obligations.

The UKIP leader Nigel Farrage, riding high in polls for European elections in May, first raised the issue on a visit to flood-hit parts of Somerset last weekend, saying it would take “a tiddly per cent of the overseas aid budget” to help flood victims.

The rightwing Daily Mail, Britain’s second-best selling newspaper, then picked up the issue running a front page editorial yesterday (11 February) calling on its readers to ‘put UK flood victims first’ and “tell the PM where our foreign aid is needed” in a petition they initiated.

The tabloid, which has often championed climate-sceptic positions, railed against “waste” in the UK’s €13 billion aid budget and called for the money to be spent at home.

“Britain has given hundreds of millions towards flood relief overseas,” the editorial said. “Today, it is our own people who are enduring the misery, and the Mail believes there could no better use for the aid budget than alleviating Third World conditions at home.”

But the hint of a gathering bandwagon around an issue which had previously been the domain of the far right sparked condemnation across the political board.

“It is a disgraceful proposal to take from the poorest people on earth in order to avoid paying the cost of flooding from Britain’s own resources, resources which the Prime Minister has already promised,” Lord Deben told EURACTIV.

Aid spending has also provided anti-retroviral drugs for 6.1 million people and helped detect and treat 11.2 million cases of TB worldwide. Much of this work has taken place under the aegis of the UN’s eight Millennium Development Goals for 2015.

European aid in particular has helped almost 14 million new pupils enroll in primary education and connected more than 70 million people to improved drinking water, since 2004, according to the European Commission.

“You simply cannot compare the resources of the UK with those of the poorest countries in the world, where they go to bed hungry, lack any access to water, sanitation, electricity,” Alexandre Polack, an EU development policy spokesperson told EURACTIV.

Claims of waste were “simply not true,” he added.

One UN official said that channeling overseas aid into domestic flood relief would risk isolating the UK in talks about a post-2015 successor to the Millennium Development Goals, which Prime Minister David Cameron previously chaired.

“Overseas aid is part of the UK’s foreign policy and how they position themselves in the world and contribute to development discussions on the post-2015 dialogue,” the source said. “How can they contribute to that if they have no money to offer the causes that may arise out of that by 2015?”

“Overseas aid is meant for overseas,” the official continued. “If we spent it on national issues, it would be a perversion of its original intent and a breach of regulations governing that part of the budget.”

Headlines in the UK have been captured by the floods which have submerged large parts of the country’s southwest, and thousands of homes have been evacuated from towns around the River Thames.

But Prime Minister Cameron clarified yesterday [11 February] that the question facing his government was “not either protecting our overseas aid budget or spending the money here at home.”

“What we need at home will be spent here at home,” he said.

Graham Watson, the Liberal Democrat MEP for the UK’s storm-battered southwest said that there was little support in his constituency for the Daily Mail’s campaign.

“Most people recognise that it is an attempt to mix chalk and cheese,” he told EURACTIV. “We have a duty to help people in difficulty everywhere and our aid budget is being extremely well spent.”

Watson queried why Farage’s “blind opposition to everything European” prevented UKIP from supporting a relief application to the EU’s solidarity fund.

“I have been pressing the government to make an application and they have three weeks left to do so,” he said. “I have had talks with the Commissioner and with government ministers and I am [still] hoping they will. At present, the Treasury is resisting as we will lose some money from our rebate, but there would still be a net gain for the UK and as taxpayers have paid into the fund I think we should be taking advantage of it.”

Oxfam said that money should be redistributed from the UK’s wealthiest population sectors to help alleviate suffering in the sodden flood plains.

British bankers had received more than €70 billion in bonuses since the onset of the financial crisis – far more than the UK’s aid budget – according to a statement by the aid agency.

“At the same time billions of pounds of tax are dodged by companies and individuals who are not paying their fair share,” Max Lawson, Oxfam’s head of policy and advocacy said. “The choice should never be between helping those overseas or people in the UK, when there’s enough money to do both.”

Asad Rehman, a spokesman for Friends of the Earth told EURACTIV that UKIP’s efforts would be better spent on supporting policies to reduce the planet’s addiction to dirty energy. “It is the height of irony that the very parties that deny climate change is happening are now calling for vital overseas aid from some of the world’s poorest countries to be diverted to deal with its effects,” he said.

Fourteen severe flood warnings were in place in Berkshire and Surrey and two in Somerset, as of 11 February 2014. The flooding was expected to last many weeks.

About 1,000 homes were evacuated along the River Thames, another 1000 homes were flooded in Worcester, and some 1,600 troops were placed on standby to help with the relief effort  .

In Wales, coastal communities faced being abandoned as rising sea levels meant that the cost of maintaining defences could no longer be economically justified.