DFIs finance projects like this weavers' cooperative in Addis Ababa through intermediaries, which are often based in tax havens. [A. Martinez Alonso/ European Commission]

DFIs support private companies in developing countries directly by providing loans or buying shares, or indirectly by supporting financial intermediaries such as commercial banks and private equity funds, which then on-lend or invest in enterprises.

But many of the intermediaries are based in the world’s most secretive tax jurisdictions, according to the report Going Offshore, published today (4 November) by the European Network on Debt and Development (Eurodad).

Report author Mathieu Vervynckt said it was strange that DFIs route so much financial support through tax havens when developing countries lose hundreds of billions of euros every year through company tax evasion and avoidance.

“DFIs are essentially providing income and legitimacy to the offshore industry,” he said.

Supporters of the use of havens argue that they have a stable legal and regulatory framework designed for financial services and that their use prevents double taxation, when income is taxed twice by two jurisdictions.

Offshore financial centres are sometimes the only feasible way for pooling much needed capital for investment in risky regions such as Africa where there are weak legal and regulatory systems, they claim.

Tax evasion by multinationals has risen up the political agenda since the financial crisis. Cash-strapped EU countries are not willing to overlook much-needed revenue lost through tax dodging.

“The current political momentum towards tax justice presents DFIs with a great opportunity to set an example of best practice in establishing the highest standards of responsible finance,” the report said.

It also compared investments to countries on the Tax Justice Network’s Financial Secrecy Index, which ranks countries according to their tax secrecy and activities. 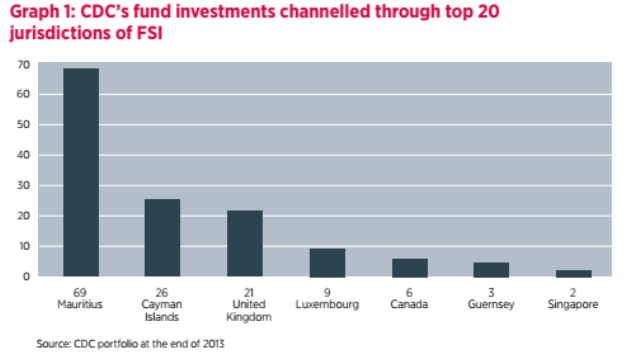 Eurodad criticised the European Investment Bank for not disclosing the countries where the companies it invests in are domiciled. That made it very difficult to judge the extent of its use of tax havens. The EIB was asked to comment yesterday and the story will be updated once a response is received.

A spokesman for the UK’s CDC said, “Businesses we support employ over one million people in developing countries and last year paid over €2.94 billion in local taxes.

“CDC requires the businesses we invest in to pay all taxes that are due of them and avoids making investments in jurisdictions that are not compliant with the OECD’s internationally agreed standards on tax transparency.”

The standards are based on the OECD Global Forum on Transparency and Exchange of Information for Tax Purposes. Many developing countries were excluded from the forum, Eurodad said, and it mostly focused on bank secrecy rather than corporate tax dodging.

The NGO called for the creation of a United Nations intergovernmental tax body to ensure developing countries can participate equally in the global reform of tax rules. This should take over from the OECD as the main forum for international tax cooperation.

Eurodad wants DFIs to ensure the funds they invest in are registered in the county of operation. They should also only back companies and funds that are willing to publicly disclose information about their owners and report back to the DFI their financial accounts on a country by country basis.

Vervynckt said, “We are urging these institutions to stop supporting companies that use tax havens and make sure that details of all operations are open to the public. It’s only right to demand that [DFIs] should be accountable to the taxpayers that pay for them and the people in the developing countries that they are supposed to help.”

A report by the European Network on Debt and Development has highlighted how much of that investment to private enterprises in developing countries is channelled through financial intermediaries, such as banks or private equity funds.

Many of those intermediaries are based in secretive tax havens, according to the report.