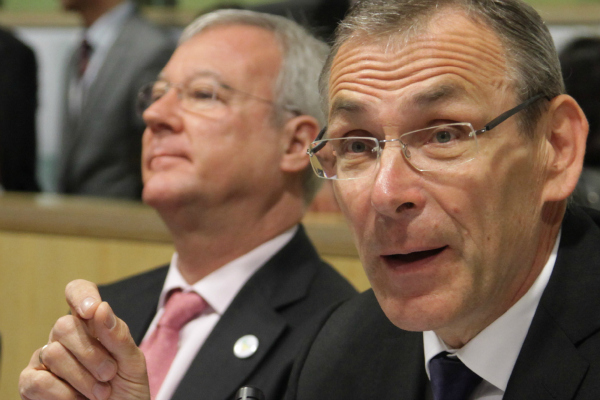 An EU-led donor conference agreed on Wednesday (15 May) to provide €3.25 billion to fund a sweeping development plan for Mali, but European donors made clear that the interim government must live up to its promises to democratic and social reforms in exchange for the international lifeline.


Four months after an EU-backed French force halted an advance by militants in the country’s north, the EU hosted the donor conference to help finance the Malian government’s plan to improve health, education, the economy and food security.

It also pledged to rebuild its impoverished northern region where skirmishes between foreign-backed government troops and militants continue.

The European Commission and the 27 member states have pledged to provide €1.35 billion for Mali through 2014, one-third of the international commitment. The pledges included €50,000 from Greece and €18 million from Spain, two troubled eurozone countries that have themselves turned to Brussels for financial aid.

European leaders made clear at the Brussels meeting that the aid comes as part of broader efforts to stabilise a West African region that has endured repeated food crises, political instability and armed conflicts.

They also noted that a portion of the EU donations will be used for United Nations' humanitarian and peacekeeping operations, and assistance to carry out elections – one of the key conditions of the aid.

French President François Hollande welcomed the financial commitments but said it was up to leaders in the former French colony to follow through with its commitments.

"We need transparency and good governance," Hollande said at the end of the conference.

Earlier, French Foreign Minister Laurent Fabius emphasised the regional dimension of the conflict, saying that “through Mali, it is the future of the subregion and beyond which is at play”.  But he also warned that the aid provided by the international community comes with strings attached.

Fabius said particular attention would be paid to the traceability of aid and the followup of projects, with conditions on disbursement of funds linked to transparency, governance, democracy and the fight against corruption.

The war in Mali “is being won,” Fabius said but, “now we must win the peace”.

EU representatives repeatedly said aid must be tied to the Malian authorities' adherence to the political stabilisation roadmap they presented to donors, and free elections due in July. Dirk Niebel, the German development minister, said his country would provide at least €100 million in aid over the next two years. But it will be released in stages if Mali “continues to implement its roadmap … and if the transition process goes well," Niebel said.

EU development aid Commissioner Andris Piebalgs said the stabilisation roadmap for Mali was the cornerstone of the international community’s commitment to the country and had to be followed resolutely.

Piebalgs insisted that beyond Mali, “the EU’s commitment is regional” and extends to the wider Sahel area. “We are investing considerable means”, he said, referring to the European Commission's €524 million commitment. An extra €200 million is also available under the EU’s strategy for the security and development of Sahel, the Commission said.

Foreign aid was expected to lead to the creation of 20,000 local jobs in the next two years in areas like water, sanitation, justice and education, Piebalgs said.

The international aid pledged by 108 countries and international organisations is a major boost for Mali, coming a year after a brief military coup and flare-up of sectoral violence led the EU and other donors to freeze aid and ultimately back the  French military operation.

He also said stabilising his own nation would help the region, referring to the Economic Community of West African States, which has pledged support for a forthcoming United Nations peacekeeping mission in Mali. "We believe that a stable Mali is a stable ECOWAS [and] a little more stable Sahel."

But the nation of 16 million faces high hurdles, including continued fighting, pressure from Islamist groups and drug traders, and refugee and food crises.

Mali must also tackle its reputation for corruption and mismanagement of aid. The Business Anti-Corruption portal, an EU-funded project, reports that bribery and graft are widespread. In 2010, the Global Fund to Fight AIDS, Truberculosis and Malaria halted funding to Mali amid allegations of fraud and mismanagement.

The Global Fund has since resumed aid and in November announced €110 million in new funding.

Europe and its global partners were under pressure ahead of the conference to ensure that the Malian government address reports of extrajudicial executions, torture and reprisals carried out by government forces.

Mali has been torn for decades by divisions between its northern Islamic and Arab communities and the African south. Attacks by northern insurgents, backed by regional Islamic groups, surged in early 2012, leading the military to temporarily seize control of the government.

United Nations rights officials and advocacy groups, including Human Rights Watch and Amnesty International, have accused insurgents and Islamic militants of pillaging and rape, while government forces have been linked to reprisals and torture.

Amnesty International has accused government forces in the north of carrying out executions and Islamic rebels of recruiting child soldiers.

“Britain’s support has been a lifeline to many over the past year, but it makes sense to work out how to prevent future shortages and help the region to become more stable. It is also firmly in the UK’s national interest.

“The international community needs to work together to provide the long-term approach the region needs to avoid falling back into crisis,” she said in Brussels.

Eloise Todd, Brussels director of development campaign group ONE, said: “Today’s conference was a welcome initiative from the EU and France. The European Commission’s pledge of €524 million, nearly half of the overall EU pledge, will make an important contribution to Mali’s recovery. But the big picture is that aid budgets are shrinking across much of Europe, and the EU itself is looking to freeze aid spending over the next seven years. It’s becoming a zero-sum game that could mean less money to respond to other crises. EU countries need to reverse aid cuts, prioritise the world’s poorest, like those in Mali, and make sure aid is targeted at the programmes that have the biggest impact on development, namely health, agriculture and education.”

European Commission President José Manuel Barroso said at the end of the one-day conference: "It is crucial that Mali's social and economic development and the consolidation of a stable state built on solid democratic foundations go hand in hand with efforts to stabilise the country. Today marks an important step forward in the social, economic and democratic renewal of Mali. By securing the pledged aid required by the country to achieve its development priorities, the international community has sent a strong signal that, collectively, we can feel proud of. This show of solidarity is crucial for all Malians and the country as a whole, the future of which concerns not only the entire Sahel region but international stability. The European Union is proud to be at the forefront of these efforts."

Mali, a nation of 16 million, erupted in conflict last year when army officers deposed the civilian government while Tuareg fighters who had been sheltering in Muammar Gaddafi’s Libya returned home to renew their long-time rebellion. Civilian rule was restored, paving the way for the restoration of EU and international aid this year.

The French intervention has stabilised the south and the influx of aid has allowed relief organisations to begin restoring war-damaged clinics in populated northern areas despite continuing threats of rebel attacks.

The UN’s humanitarian agency reported on 8 May that 475,000 people had fled northern regions due to conflict and food insecurity. The International Committee for Red Cross says civilians continue to stay away.