By Matthew Tempest in Ethiopia | EURACTIV.com

But this month. the country of some 100 million is rebranding itself as the land of the “Origins of Life”, hoping to more than triple the number of Western tourists visiting this land-locked state in one of the most dangerous neighbourhoods on earth – the Horn of Africa.

With it, the desperately poor country intends to raise its revenue to some $3 billion a year by 2020 – not an insignificant amount in a country where the per capita average income is $550, according to the World Bank.

Ethiopia boasts some eight UNESCO world heritage sites, a stable government, a nation proud of being the only uncolonised state in Africa, and tourist-friendly exports such as coffee and Rift Valley wine.

But it also is currently facing a catastrophic drought, exacerbated by El Niño, which has plunged another 10.2 million citizens – largely subsistence farmers in the north and east – into dependency on emergency food aid.

That comes on top of 8 million plus subsistence farmers already dependent on aid – making a total of nearly 20% of the population.

Although they do not like to use the ‘f’ word (Famine), aid agencies have been warning since December that current pledges of help will run out by the end of April, leaving millions at the possible risk of starvation.

This week, Wolfgang Jarmann, head of Care International, warned that “it is like watching a disaster take place in slow motion.

“The impact [of El Nino] has been devastating for vulnerable people…across southern and eastern Africa, but nowhere is the outlook more troubling than in Ethiopia right now.”

Already, hundreds of thousands of cattle have perished, and crops failed, leaving an almost alien landscape of barren, parched red rock and dust across hundreds of square miles of territory in the north and east.

According to CARE, there are already 1.7 million children, pregnant women and breast-feeding mothers requiring nutritional support.

The United Nations has launched an international appeal for $1.4bn in emergency funding for Ethiopia. Less than half that amount has so far been met by donors.

The US has stumped up $97 million, whilst the government in Addis Ababa has committed $380 million dollars.

The government has set up a National Drought Resilience and Emergency unit, with some 230 million Ethiopian Birrs ($11 million) set aside for increasing school meals, to stop children dropping out of education to assist their parents on the land, or scavenging or begging.

But now, it too is admitting it needs help. Deputy Prime Minister Demeke Mekonnen has pleaded for “immediate assistance”, adding that the consequences of a humanitarian disaster would hurt not just Ethiopia but the “peace and stability of the region at large.”

The EU has, so far, given €42 million for Ethiopia specifically for the El Niño drought. Humanitarian Aid Commissioner Christos Stylianides has promised a further €24 million in humanitarian aid for the country.

A spokeswoman for DEVCO said that “The EU stands by Ethiopia and is helping to provide life-saving assistance right now.”

“We will continue to work relentlessly so that humanitarian aid reaches the most vulnerable populations in Ethiopia,” she added.

Some 80-90 million Ethiopians merely survive as subsistence farmers at the best of times, living in mud huts and corrugated steel shacks mostly without running water or electricity, tending rows of vegetables and whatever cattle the family possess, fetching bundles of wood and plastic canisters of water daily.

Unlike the Communist Derg regime (1974-1991), which mismanaged the famine of 1984-85, Addis Ababa is now a strong government and booming economy with 10% GDP growth a year for more than a decade.

Whilst the central government has appealed to the outside community for additional resources to cope with the drought, it is reluctant to raise the problem during its tourism push.

Outside Lalibela – home to the 12th century rock-hewn Orthodox churches which are the primary attraction of the government’s tourism drive – locals were being handed emergency food rations, as tourists queued up to view the churches in the baking 33 degree heat. 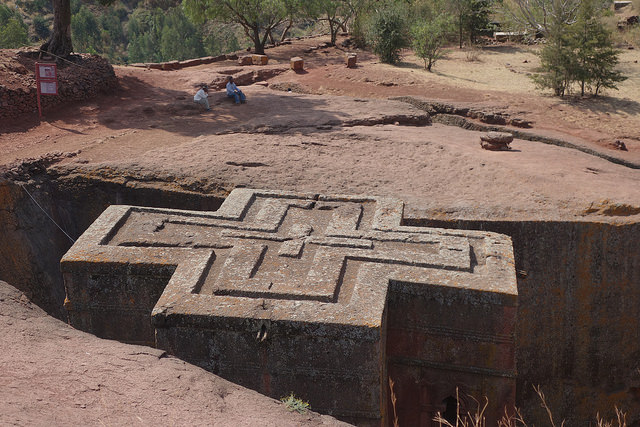 The roof of one of the 12th century rock-hewn Orthodox Christian churches in Lalibela. [MattTempest/Flickr]

However, at one roadside aid handout, government officials accompanying journalists refused to stop the minibus to allow photographs, or the aid recipients  to be interviewed.

Asked about the drought and plight of the people there, the head of the state tourism authority told EURACTIV that the government’s response had showed it protected its people – and compared the situation to the current drought in California.

Complaining that Ethiopia was “more than a one-story country” (referring to the 1984 famine), Solomon Tadesse, Chief Executive Officer of the Ethiopian Tourism Organisation, said: “There is one thing people have not noticed. The drought is the hardest in 50 years. But the great thing about it is the government has done a good job – reserving [the] right amount of grain, with no harm to people.”

“This year, no deaths, unlike in ’74 and ’84. We have a good infrastructure to get to drought areas. No major impact in terms of deaths of humans – just cattle.”

“I’m sure people know there is a drought in California – it doesn’t stop people going there.”

Referring to worries from NGOs that the food aid supplies could run out within weeks if no further financing is found, Tadesse added: “[The] figures could be true, or could be just projections”, and insisted no tourists were cancelling their trips as pictures of the drought started to seep into the Western media.

“The name of the game is ‘be strong internally’,“ he concluded.

The Origins of Life campaign focuses on its UNESCO World Heritage Sites, the wildlife in the Simien Mountains National Park, and ‘Lucy’, its 3.2 million year old skeleton, now housed in the National Ethiopian Museum in Addis Ababa. In addition, there are the delights of Ethiopian coffee, Rift Valley wine, and native cuisine of injera (flat bread) and stewed meats. 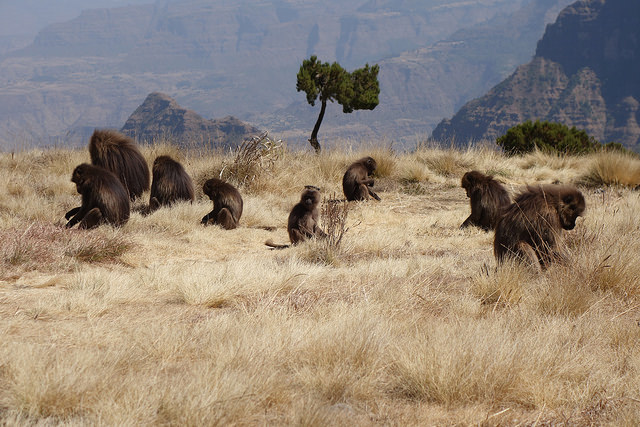 The country hopes to increase that figure to one million visitors this year and three million by 2020, largely through large-scale organised tours of tourists from France, Germany, the Netherlands, the US and Japan.

Undeniably, those hardy tourists who currently visit the country bring revenue in the form of meals, drinks, guides, souvenirs, accommodation and transport.

And tourism does not have to be an either/or, ‘zero sum’ game with emergency humanitarian aid. But the timing does seem unfortunate.

Tourism in a neighbourhood of terrorism and failed states

As one tourism official privately admitted, the biggest obstacles to boosting Ethiopia’s tourism numbers are “poor infrastructure, and we live in a bad neighbourhood”.

Whilst the country is approximately two-thirds Orthodox Christian, one-third Muslim, who appear to live peacefully side by side, all it would take is one ISIS or Al Shabaab attack on Western tourists to kill the nascent tourism industry dead in its tracks – witness the recent attacks on tourists in Tunisia. 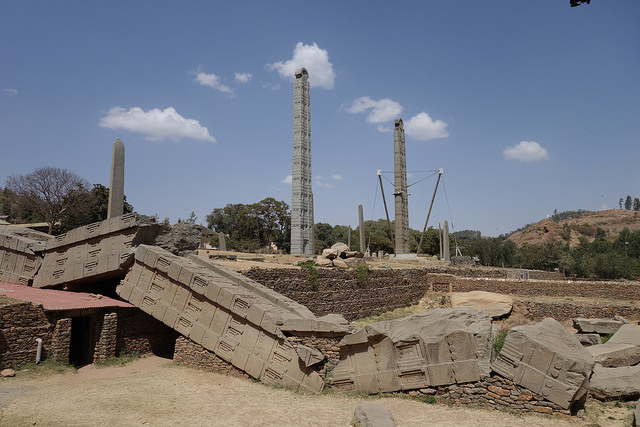 Ethiopian Airlines boasts a modern fleet, professional staff and a good safety record, but the security checks at regional airports can be chaotic.

One retired airline pilot, European but born and brought up in Ethiopia, told EURACTIV: “For me, Ethiopian Airlines are just one notch under someone like Lufthansa, in terms of safety. But the airports are another matter.

“It would be child’s play to put a bomb on one of these aircraft.

“But why bother? Just stand by the side of the runway and rake the plane with machine gun fire when it takes off, laden with fuel. Will go up like a firework.”

But asked about the threat from Isis or Al Shabaab hitting its nascent tourism industry, the managing director of Ethiopian Airlines international services, Esayas Woldemariam Hailu, refused to answer the point directly, but with a rambling anecdote about a stranger coming into an Ethiopian village, and asking a local boy where somebody lived.

“In other villages the boy would point to the house. In Ethiopia the boy would ask ‘ who are you?’, ‘what’s your purpose?’ Hailu said.

“Security for us is strong…it is in our bone marrow,” he added.

But that security comes at a price. Human Rights Watch states that “The government continues to block even mildly critical web pages and blogs. The majority of opposition media websites are blocked and media outlets regularly limit their criticism of government in order to work in the country.

“Ethiopia is one of the largest recipients of donor aid in Africa, receiving almost $4 billion in 2014, which amounted to approximately 45 percent of its budget.

None of the main NGOs contacted by EURACTIV wanted to comment on the record about their relationship with the Ethiopian government, but one – speaking on condition of anonymity – cited is as “probably the most difficult, restrictive, place we work in Africa.”

But whilst the aid agencies remain tight-lipped, that does not stop advocacy NGOs – and the European Parliament.

In January, MEPs laid down what is thought to be the most condemnatory resolution yet on Ethiopia, heaping scorn on Addis’ contention that only “dozens” of protestors had been killed by security forces, as Oromia people who reside in the region outside the capital are forceably resettled to allow economic expansion of Addis Ababa.

Human Rights Watch, and others, say at least 140 people have been killed, and many more tortured.

In addition, the European Parliament condemned harassment of local journalists, jamming of media broadcasts and the use of anti-terrorism legislation “to repress political opponents, dissidents and human rights defenders.”

Walk before you run

Ethiopia often sees itself as the ‘Lion of Africa’. The country is building a high-speed electric railway to Djibouti (replacing a French line built in1894), has completed two tram lines in Addis Ababa, and is planning a new international airport 100km south of the capital with a six-lane highway and train connection.

The controversial Grand Renaissance Dam, the biggest hydroelectric project in Africa, is due to be completed in 2018 and provide a (more) reliable source of electricity, even allowing Ethiopia to become an energy exporter.

Criticism of its human rights record, or security measures, or drought prevention action, is often dismissed by officials with a ‘ better than the rest’ [of Africa] attitude.

But as Ethiopia aims to become a middle-income nation within a decade, perhaps it needs to set the bar a little higher than comparing itself to some of its catastrophic neighbours.

And perhaps Addis Ababa should take a lesson from its own, emblematic, ‘Lucy’ skeleton – and let its tourism industry learn to walk before it tries to run. 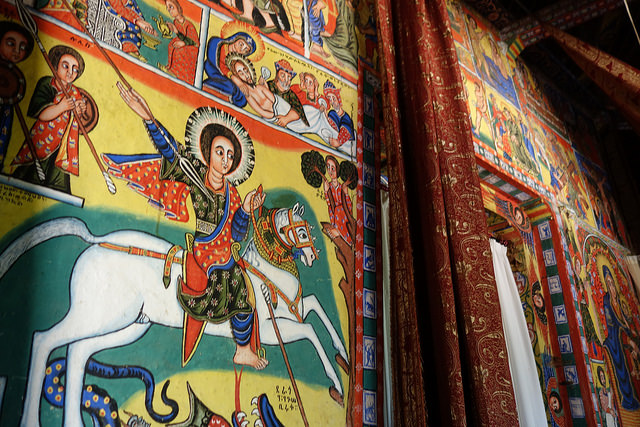 Ethiopia has suffered regular droughts - most notably in 1973-74 (which helped lead to the downfall of Emperor Haile Selaisse) and 1984-85 (which turned into a famine which killed up to one million, partly due to the mismanagement of the communist Derg regime of 1974-1991, and saw the creation of Live Aid).

This time, with two failed harvests during the dry season and the affect of the El Nino, experts and NGOs are warning it is the worst famine in 50 years - and with a funding shortfall of up to $600 million, aid supplies are currently estimated to run out in April, leaving up to 18m people without food or food supplies.