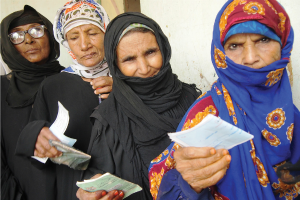 EXCLUSIVE / A funding shortfall of around half of the EU’s annual humanitarian aid budget will axe life-saving NGO projects and trigger global job losses in July, unless urgent action is taken by politicians of the 28-country bloc, senior officials have told EURACTIV.

The aid crunch is the result of a gap between the sums that EU member states’ pledged for aid operations in ‘commitment credits’ and what they have so far delivered, under a new 2014-2020 EU budget framework insisted on by countries such as the UK.

“The situation has become critical,” said Walter Schwarzenbrunner, the resources director of the EU’s Humanitarian Aid and Civil Protection directorate (DG Echo). “We need to find a way to get institutional reinforcement of €400 million – with €150 million before the summer – to avoid a real crisis.” Additional revenue shortfalls would take the final budget deficit to €480 million, he said.

So far, DG Echo has tried to limit the effect of the funding gap by prioritising core operations and postponing new payments to small NGO operations in regions including the drought-prone Sahel in Sub-Saharan African, as well as parts of Asia and South America.

But the Union’s capacity for responding to humanitarian crises has been limited in 2014, Schwarzenbrunner said, even if he still hoped that the Commission would yet bring forward new proposals in late May.

Asked whether life-or-death aid delivery would be axed in July otherwise, he replied: “This would definitely be the consequence. I cannot deny it. We have prioritized crucial life-saving operations at least to a certain extent, but we will run out of the possibility of continuing these under a variety of scenarios that could materialize.”

Without the replenishment of DG ECHO funds, even core funding in areas such as Syria, South Sudan and the Central African Republic could be affected, he said.

Other EU officials confirmed that, in the event of a humanitarian crisis, the directorate “would promise less than they would in normal circumstances”.

Any shortfall in funding for programmes after July will also be accompanied by job losses.

“We operate to a greater extent than other parts of the Commission using short-term external staff, and of course their contracts and jobs depend on the relevance of the action behind it,” Schwarzenbrunner told EURACTIV. “At the end of the day, if no action is financed, it calls into question the pertinence of keeping people there on those contracts.”

The EU is the world’s biggest aid donor, providing over 50% of the world’s humanitarian assistance through international groups such as the Red Cross/Crescent, UN agencies, and NGOs. With relief missions from Haiti to Colombia, polls have consistently shown humanitarian aid to be the EU’s most popular mission.

The decision by senior officials to speak out may thus reflect real anxiety at the scale of the cutbacks that may follow a payment credits crunch in the summer.

“I am sure DG Echo will try to manage the situation,” another EU source told EURACTIV, “but if you have to reduce staff, you lose your possibility to react to a crisis.”

Humanitarian aid is different to other forms of EU spending in that it is relatively short-lived – projects typically last between 12-18 months – and it often has to be deployed immediately to be effective, as in the case with famines or floods, for example.

NGOs contacted by EURACTIV expressed grave concern at the potential consequences of what they said was an “extraordinary” situation.

“DG Echo supported 120 million people in 2013 and if it has to stop its projects later this year it will have a tremendous impact on conflict-affected people needing life-saving and resilience-building projects in the field,” said Kathrin Schick, the director of VOICE, an umbrella group for aid NGOs. “Our members are very, very concerned about this.”

“As humanitarian actors, we need predictability of funding,” she continued. “You can’t postpone aid payments very long as you can only buy medicine with the money you have. We hope a way can be found to eliminate the gap between commitments and payments in the 2015 budget to avoid similar situations arising in the future.”

“But we have to be careful that we don’t commit too much too quickly as we won’t be able to pay up,” he said.

Attempts are underway to access some reserve funds in the Multiannual Financial Framework (MFF) for 2014-2020. Non-vital aid programmes are also being deferred to next year where possible but, even with these provisos, the cuts would bite.

“If you have to delay a payment to a small NGO, it may be their end,” the official explained.

Within the Commission, the problem is seen as a member state reluctance to commit sufficient payment credits in a bid to satisfy the UK’s demand for lowering spending in this EU budget.

The best opportunity for a resolution to the shortfall may now be a request from the Commission or Parliament for a mid-term review of the MFF.

“For the moment though, we are stuck between a rock and a hard place,” the EU official said.

The European Community Humanitarian Office (ECHO) was created in 1992 “as an expression of the European solidarity with people in need all around the world”.

In 2004, it became the Directorate-General for Humanitarian Aid before integrating Civil Protection in 2010 for a better coordination and disaster response inside and outside Europe.

In 2010, Kristalina Georgieva was appointed as the first dedicated Commissioner for international cooperation, humanitarian aid and crisis response.