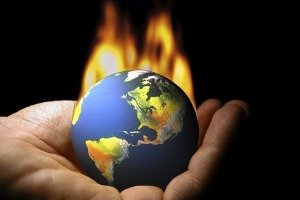 The world is on track for around four degrees Celsius of global warming under current carbon emissions trends, says the EU’s chief climate negotiator, a trajectory that some scientists say risks a planetary mass extinction event.

"When you look at the global emissions, with the current pledges which are on the table … we are probably heading towards 3.8 or 4.2 degrees [warming],” said Artur Runge-Metzger, speaking at a roundtable hosted in Brussels by the Institut français des relations internationales on 14 March.

The EU official then asked US and Japanese officials at the roundtable: “Are you making preparations in your countries to tell your industries and households what it means to adapt to a four-degree [change] and have you made estimates of what these costs are that will be born by the public sector and households?”

Japan has refused to commit to a second round of commitments under the Kyoto Protocol, while the US has still not ratified the treaty itself.

The Japanese trade official, Jun Arima, said he had “a serious doubt” that current pledges would be enough to limit global warming to two degrees, the UN Framework Convention on Climate Change’s official target.

For the US Mission to the EU, Dale Eppler, the climate attaché, said that he was not aware of any studies on the climate impacts of a four degrees temperature rise for the US population.

“There is a significant amount of opposition to work on climate policy [in the US],” he said. “Parts of Congress have even blocked attempts to set up a climate service.”

A report by the Royal Society last year found that with planetary warming of four degrees or more, the limits for human and environmental adaptation “are likely to be exceeded in many parts of the world”.

The London-based Royal Society report estimated that at four degrees of global warming, half the world’s current agricultural land would become unusable, sea levels would rise by up to two metres, and around 40% of the world’s species would become extinct.

Meanwhile droughts and wildfires would ravage the globe.

“The ecosystem services upon which human livelihoods depend would not be preserved,” the authors contended.

“I would be interested to hear from the US and Japan what they intend to bring to the table in the negotiations this year to at least start bridging that gap [between two and four degrees],” Runge-Metzger said.

He also questioned whether the US achieving self-sufficiency in fossil fuels by 2030 – because of what commentators call ‘the shale gas revolution’ – would allow emissions to be reduced quickly enough.

“In terms of what is required in the energy sector – Europe would say total decarbonisation by 2050 – if you just switch from coal to gas, that probably is not going to be achieved,” he said. “So how will you deal with those emissions in the medium term coming from a still heavy form of fossil fuel, even if it is a gas based economy?”

The US attaché conceded that with a switch to shale gas, “we would have a reduction but still significant emissions”.

But Eppler also pointed to “extremely positive” press reports of what he said would be the first commercial scale application of carbon capture and storage (CCS) technology to a power plant in Texas.

CCS is an experimental technology that its proponents believe will reduce carbon dioxide emissions by capturing and storing them before they are emitted into the atmosphere.

Construction of the system in Texas is due to begin next year.

The Kyoto Protocol was adopted in December 1997 by the 3rd Conference of the Parties to the UN Framework Convention on Climate Change (UNFCCC) and opened for signature in March 1998.

The protocol commits industrialised countries to reduce during the period 2008-2012 their collective emission of six greenhouse gases by 5.2% from 1990 levels. Under the protocol, the EU committed itself to reduce emissions by 8%.

To enter into force, the treaty had to be ratified by 55 countries, and the developed countries that have ratified must account for at least 55% of 1990 emissions.