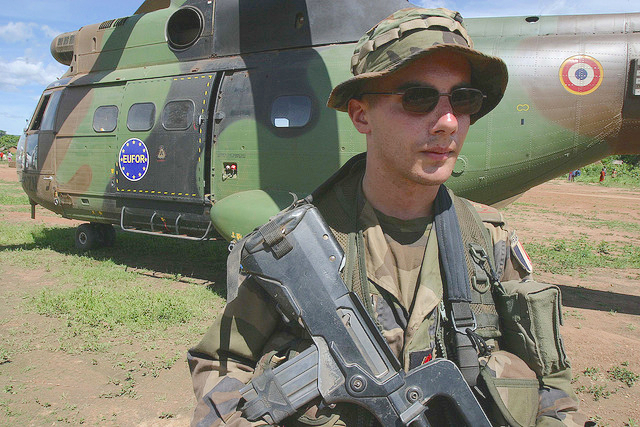 EUFOR can be seen as a precursor to an EU military. French EUFOR soldier, Central African Republic. [hdptcr/Flickr]

After several weeks delay, the European Council has finally unveiled plans to launch the EUFOR mission to the Central African Republic (CAR). 1000 troops would be deployed, in support of French and African forces already on the ground. EURACTIV France reports.

The EU seems to have paid heed to France’s many appeals. On the day of the EU-Africa, the EU External Affairs Council officially launched a European mission to CAR.

“EUFOR RCA is to provide temporary support in achieving a safe and secure environment in the Bangui area, with a view to handing over to a UN peacekeeping operation or to African partners” stated the Council in a press release on April 1.

Financial, logistical and personnel reinforcements promised by a number of European states to support the French military operation in its former colony have long been awaited. Indeed, the postponed launch, initially due 17 March, caused anger in France.

In mid-March, EU foreign ministers stated that “the Council stresses the need to speed up work on the preparation of the CSDP-EUFOR CAR operation so that it can be launched quickly in accordance with the commitments undertaken by the European Union”.

This was accomplished, thanks to contributions from “big” member states that initially refused to support the French. The UK, Germany and Italy finally decided to participate in the EUFOR operation.

The success of the talks was made possible by greater contributions from France. Indeed, a source involved in the case told EURACTIV that France had to “concede a bit more resources”.

According to the Council’s press release, the CAR operation “will comprise up to 1000 troops, led by Major-General Philippe Pontiès (France) as EU Operation Commander […]The common costs of the operation are estimated at €25.9 million for the preparatory phase and a mandate of up to six months starting from the point of reaching full operational capability.”

The nationality of European reinforcements is yet to be confirmed. Many countries are sending a handful of soldiers, whereas Germany is sending none. The member states’ military support remains low in comparison to the 2000 French soldiers already deployed, and the 6000 troops of the African-led International Support Mission to the Central African Republic (MISCA).

The launch of the EUFOR mission coincides both with the visit to France of the transitional president of CAR, Catherine Samba-Panza, and the EU-Africa Summit, taking place in Brussels 2 and 3 April.

An international meeting, during which a mini-summit on CAR will be held in order to “evaluate security issues”, whilst continuning clashes have killed dozens in Bangui since Saturday.

Other issues to be discussed include providing the means necessary to restore the state and ensure transitional politics, as well as the means to provide humanitarian aid and development.

Although the question of development and cooperation might arise during the summit, member states do not want to launch a donators conference, to raise additional funds. “CAR will benefit from €750 million during the period 2014-2016” explained an advisor.

However, the former French colony remains “the poor child” of public development aid. France is still one of the few donors of bilateral funding, and the CAR possesses a low capacity to absorb these funds. In order to bring about the reconstruction of the country, France, Germany and the EU are considering setting up a reconstruction and development fund.

“The launch of this operation demonstrates the EU’s determination to take full part in international efforts to restore stability and security in Bangui and right across the Central African Republic. I’d like to thank all the Member States and non-EU countries which are working together to make this operation a success. It is vital that there is a return to public order as soon as possible, so that the political transition process can be put back on track.” said the EU High Representative for Foreign Affairs and Security Policy and Vice President of the Commission, Catherine Ashton.

At the End of 2013, EU member states promised to organise a military operation to support the French intervention in Central African Republic. Since then, the mission has struggled to get off the ground.

The EU’s Common Security and Defence Policy (CSDP) was launched in the 1990s, but there is still no European budget allocated to defence. The economic crisis has led to cuts in defence across the EU. From 2001 to 2010, EU’s expenditure in defence fell from €251 billion to €194 billion.