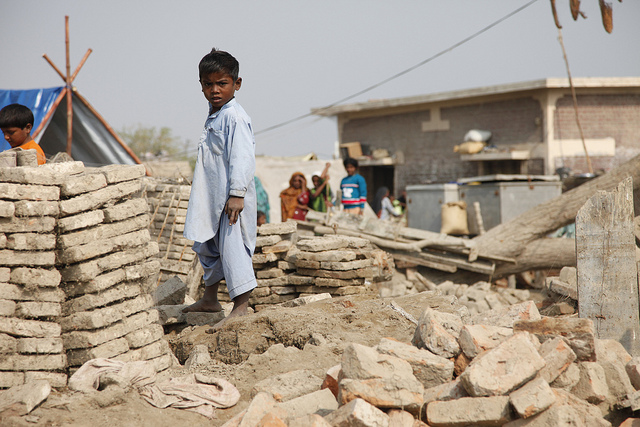 A child stands amongst the remains of buildings destroyed by the floods in Sindh province, Pakistan. [UKaid/Flickr]

The EU has launched a new website aimed at improving the transparency of development aid, an effort deemed commendable, but poorly executed. EURACTIV France reports.

During a high-level meeting with the Global Partnership for Effective Development Cooperation, the European Commission launched an Internet portal that pulls together information on European development and humanitarian aid aimed at improving the transparency of EU development aid.

The initiative gives citizens a general view of European aid, as well as the contributions of each member state.  France comes 9th in the top EU donors of humanitarian aid, with €52.8 million per year. Ireland, the first country to leave an EU sponsored bail-out programme, contributes more than France, with €61.9 million per year. Sweden, the highest European contributor, gave €528.5 million in 2013, ahead of the UK (€478.7 million) and Germany (€420.9 million).

This is a negative trend for France, which was the 5th largest international donor in 2012, behind the US, EU institutions, the UK and Germany.

The EU and its member states are the top official development aid donors in the world. With 55.8% of contributions, they are far ahead of the US (19.1%) and Japan (6.7%).

“The new EU Aid Explorer will help to further increase transparency on what we do and improve accountability to citizens, both in the EU and developing countries,” declared Andris Pieblags, European Commissioner for Development.

Although the EU Aid Explorer is the European Commission’s first step in improving the access of EU development aid information, the format of the website has come under fire.

“We would like to see the website use information published by the International Aid Transparency Initiative (IATI) more efficiently,” claimed David Hall-Matthews, director of the PublishWhatYouFund website.

IATI information is used by donor countries, governments of developing countries and NGOs to publish detailed information on development aid that is accessible to all. It is used by 37 international donors who together represent over 75% of global aid.

In comparison, the Commission’s new website only combines available information from different donors and most statistics date from 2012 or even 2011.

PublishWhatYouFund identify this discrepancy. It called on the EU to improve the initiative and to better use IATI statistics. “If the EU Aid Explorer puts the IATI’s statistics to good use, it could have graphs representing the progress of certain projects by using current statistics. This would improve the information.”

The International Aid Transparency Initiative (IATI) is used by donor countries, governments of developing countries and NGOs to publish detailed information on development aid which is accessible to all.