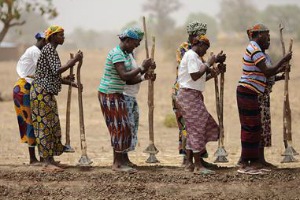 The recently launched Global Alliance for Resilience Initiative (AGIR) is shaping up to be a major long-term EU-led strategy for Africa's fragile Sahel region. As a Commission official put it, if Europe would prove unable to prepare the next 20-25 years, it would then have to face the destabilisation potential of the region.

Despite its constraints with a long-term budget decided every seven years, the EU is strongly engaged in a strategy to last at least 20 years for Sahel, the zone of transition between the Sahara desert in the North and the Sudanian savannah in the south, Commission officials said.

Philippe Thomas, head of the food crises and food economy section at DG Devco (Development and Cooperation), said that the whole concept of the new AGIR alliance (see background) was built around the EU’s new approach of building resilience, based on lessons learned from previous food crises.

Resilience is the ability of an individual, a household, a community, a country or a region to withstand, adapt, and quickly recover from stresses and shocks such as drought, violence, conflict or natural disaster.

“In the Sahel, over the nine last agricultural campaigns, we have had six years of food crisis. But those have been of different nature,” Thomas said. Among them was the 2008 price crisis, which prompted the EU to put in place the food facility and to unblock €1 billion.

“This is going to continue. At first we thought this was a temporary shock, mostly due to market speculation. Actually it’s more complicated. Among the causes is the fact that we [the EU] have changed policies,” he said.

Thomas referred to the Union's abandoned policy of excess production under the Common Agricultural Policy. Without this excess production and low prices, any small climate shock in the USA or Russia or the slightest rumour on production shortages would prompt prices to explode, affecting the poorest countries, he said.

How to address these issues, he said, was ranking high in the priorities of the current UK G8 presidency, as well as of the 2014 Russian G8 presidency. This was due to the fact that a major transition in food policy was taking place, which he compared to the energy transition from fossil fuels to renewables.

Investment in sustainable agriculture is a major pillar for AGIR, the Commission official said. He added that the humanitarian response would continue when necessary, as it has proved to be much needed in 2012.

“But if the EU would resort only to the humanitarian action and would prove incapable of pre-empting the crises and the challenges of the 20 next years, then we are running against the wall,” Thomas said.

The meaning of the alliance is that the EU has sought to pull is political weight to bring on the table the other partners – the USA, the World Bank, UNICEF, WFP, the EU member states and African governments, to build something coherent for the region.

Similar alliances existed in other areas, such as in the Horn of Africa, where there the US was in the lead, the Commission official said, calling this a "division of tasks, not competition". The EU is better placed than any other international player to be the catalyst for the AGIR alliance, he said.

Commitment ‘beyond any doubt’

To illustrate the Commission’s commitment to development aid, Thomas said that only two people used to accompany Commission President José Manuel Barroso at the sessions at the level of head of state at G8 summits, and one of them was the head of unit for Rural Development, Food Security and Nutrition in DG Devco, Jean-Pierre Halkin.

He also made it plain that priority had been give to AGIR in the draft budget for 2014-2020.

What is new, he said, is that in the usual choice between priorities, €1 billion per year had been earmarked for food security. The initial proposal has been more modest, he said, but unfolding events compelled the Commission to increase this budget.

Another change was that in the past, the EU has healed the symptoms, but had done little to address their causes.

Thomas argued that this time the EU won’t arrive “as firemen”, but would rather build, on the basis of the seven-year EU budget, capacities in individual countries to cope with the crises. The Sahel region is capable of feeding itself, but to achieve this, investment needs to be made, he insisted.

Asked if he thought the development budget would be slashed at the upcoming EU budget summit on 7-8 February, with individual countries asking for cuts in many areas of spending, he said:

“Maybe some [EU] heads of state and government don’t have as a priority Africa’s development, but if we look at France, Spain, Italy, I don’t think there are a lot of people there who would like to see Africa to drown in food crisis, to generate migration flows, to witness the growth of terrorism. All these issues are linked.”

Thomas also referred to the fact that French President François Hollande spoke of a world food strategic reserve with Jacques Diouf, who heads the UN Food and Agriculture Organization.

“I don’t see either Germany or the Netherlands saying that food security and climate change are not global challenges. And I don’t see the UK saying something different at G8 level. It’s a pretty consensual topic,” Thomas said.

Hollande indeed has launched a global campaign to win support for strategic stocks of agricultural commodities, but Development Commissioner Andris Piebalgs said last autumn that was not the best way to tame food prices, advising a focus on agricultural investment to boost production.

Asked by EURACTIV to comment on the AGIR strategy for Sahel, Natalia Alonso, Head of Oxfam International EU Office spoke in positive terms about the steer  demonstrated by the European Commission.

“But to avoid that the next drought becomes another food crisis, the litmus test is to translate this new impetus into concrete and coordinated actions by all actors, national governments included,” she added. “Putting the Sahel on the pathway to resilience will require a combination of humanitarian action to respond to live-threatening challenges as early as possible with long term investments to build the resilience of those who are the worst hit by droughts, floods or food price hikes.”

“We must move from crisis management to risk management. Priority should be given to investment in small scale food producers, especially women, the development of national, regional and community-based food reserves and early warning systems and finally greater investment in long term social protection and safety net programmes targeting the most vulnerable,” Alonso concluded.

Reacting to the same question, Eloise Todd, Brussels Director of ONE, a global advocacy and campaigning organisation founded by Bono, the frontman of rock band U2, said:

“Linking humanitarian aid to longer term programmes that help people deal with the underlying causes of food insecurity is critical to avoiding future crises.  Enabling rural farmers to improve farming techniques and cope with the impact of climate change is one example of how this can be done.  But with European aid to sub-Saharan Africa under threat of cuts in the negotiations over the long term EU budget, it’s critical that member states reverse the cuts to the Commission proposal and ensure the money is there to support these initiatives in the future.”

The Global Alliance for Resilience Initiative (AGIR) was launched on 6 December 2012 in Ouagadougou. In a Joint Statement outlining the principles, priorities and next steps of the alliance, stakeholders fixed themselves the objective zero hunger within the next 20 years.

Among the next steps for 2013 are establishing working groups, developing a monitoring mechanism, identification of some immediate actions, as well as the promotion of the AGIR initiative, including in the target countries.

The countries in the Sahel that are primarily concerned are Mauritania, Senegal, Mali, Burkina Faso, Niger and Chad.