Experts representing various Commission directorates spoke to the press ahead of a meeting of EU health ministers to be held today, as well as a Foreign Affairs Council on 20 October, and an EU summit on 23-24 October, at which the issue of Ebola is also on the agenda.

The message is that more people should be put on the ground.

Scaling up the response

An expert admitted that there was a gap between available resources, specifically beds, and what is needed, the ratio being 1 to 3. There are around 1,100 beds available in Liberia, but more than 3,000 are required, he said.

“First and foremost, the challenge is to mobilise more medical staff. We have to mobilise foreign medical teams, call on member states, mobilise volunteers, send them on the field,” an expert said.

Reportedly, working groups on Ebola are being held daily, bringing together both Commission services and member states. Also, once a week, the UN and NGOs have been involved in the coordination.

Overall assistance so far has been of more than €450 million, with 180 euros coming from the EU and €300 from some member states, the UK, France and Germany being cited. However, it was said that this financial effort was not sufficient.

Work on the ground has been done mostly through Médecins Sans Frontières (MSF), the French-founded humanitarian-aid non-governmental organization, but also through WHO, the International Red Cross and other agencies. The efforts of MSF received special appraisal by the Commission representatives.

USA and UK on the lead

Commission officials said that a good example was given by the USA and the UK, who have been able to effectively mobilise troops to tackle the crisis in Western Africa. More concretely, they said that the USA has been able to mobilise 3.000 troops for Liberia, and that the UK has been mobilised several hundred for Sierra Leone. This may be an example to be followed by other countries, journalists were told.

Reportedly, some 600 US troops have already arrived in Liberia, equipped to build medical centres and give training to local medical workers. In the UK, a naval vessek with a 100-bed medical complex is preparing to head for Sierra Leone.

But the experts admitted that the present limited capacity for repatriation of Western staff could become an obstacle for further deployments.

“We don’t have an airplane waiting somewhere to fly out. But we have the guarantee that we can find a plane. The problem would be if we have too many cases at the same time. Above two cases, it would be difficult to respond”, the official said.

Apparently, EU experts are warning that if more people are sent on the ground, this limited capacity could become a bigger problem. 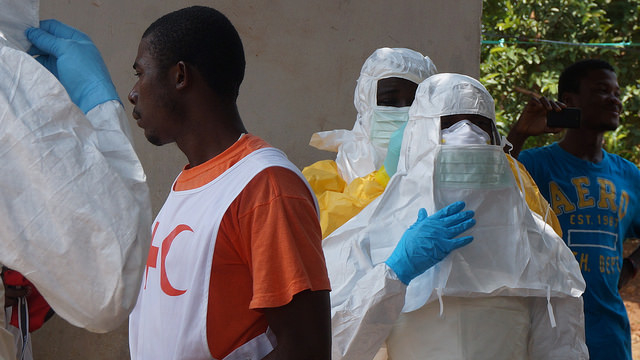 “We are afraid that the crisis, the outbreak will still spread further, so we may have cases in the future when we would need to evacuate more patients”, an official said.

Experts said they would ask EU member states to provide military planes with adapted technology, which may be specialised planes, or aircraft with a “bubble” in it for transporting persons with symptoms of Ebola. Reportedly, some member countries had already announced that they will make contributions.

Asked if Ebola could be considered a pandemic, a EU official answered negatively. “As bad it is, the epidemic is still localised. It’s in three countries in Western Africa,” he said.

But he added that the longer this epidemic persists in Western Africa, the more likely is that there would be “imported cases”, anywhere in the world.

“Would it spread in Europe in the same way as in Africa – certainly no, the conditions are different”, an expert said.

Journalists asked questions about ongoing work to develop vaccines against Ebola and whether the EU was providing financial support for the research. It is generally known that the global healthcare company GlaxoSmithKline is quite advanced working on a vaccine, and that human trials have already started.

Experts explained that one of the most effective instruments for preventing the spread of Ebola outside Western Africa was the “exit screening” of outgoing airline passengers. They said the system screening all exiting passengers to make sure they are not infected was already effective in Liberia, Sierra Leone and Guinea.

However, exit screening cannot be considered an absolute guarantee that the disease will not be exported. The incubation period for Ebola is 21 days and it’s possible that one travels, and the symptoms appear later. The disease is transmissible only when the symptoms are manifest. This is why it is also important to provide to passengers information about to do if symptoms appear, they explained.

The Commission has produced information for incoming and outgoing passengers, translated in all the EU member countries languages, and the member countries are encouraged to spread it, the experts said.

If a person returning from West Africa discovers that they have symptoms of Ebola, according to those instructions, he or she should not rush to a hospital, but contact the medical authorities in advance so that they would be prepared to receive him, the instructions say.

False alarms should be avoided to the extent possible not to overburden the system, experts said. But they admitted that with the coming flu season, the number of false alarms is likely to grow.

Asked about the thermic cameras with which many airports are fitted, the experts said that those detected fever, but just like Ebola, a lot of other diseases have fever as a symptom.

The Ebola epidemic, the worst since the disease was discovered in 1976, has killed more than 4,000 people in Guinea, Sierra Leone, Liberia and Nigeria and has also spread to Senegal.

F14 of Liberia's 15 counties have reported confirmed cases. As soon as a new Ebola treatment centre is opened, it is immediately swamped with patients.

The first case of infection with the Ebola virus in Europe took place in Spain.