EU: New Deal for Somalia is not ‘business as usual’ 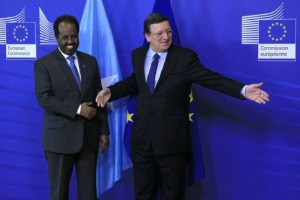 The European Commission pledged €650 million of additional aid for the next three years for Somalia at a conference yesterday (16 September), aimed at helping Mogadishu’s path towards peace and state building.

The New Deal for Somalia conference gathered representatives of governments, financial institutions and aid donors in Brussels to help Somalia on the path to recovery.

EU representatives at the conference stressed that the New Deal compact marked a new approach in the way the International Community works with Somalia and cannot be treated as “business as usual”.

Danish Minister for Development, Christian Friis Bach, wrote in an opinion piece published on EURACTIV that the Compact was "a contract of mutual accountability” between Somalia and its international partners.

>> Read the Op-Ed by Friis Back: New Deal for Somalia is an important deal

In the same spirit, the EU's Development Commissioner, Andris Piebalgs, said that the EU wanted to launch a new approach towards Somalia: “As we seek to empower Somalia politically, we must do so by empowering its institutions and its people across the country. To this end, we will have to link together political processes, actions to establish workable security and justice systems, economic growth, and service delivery. This is the strength of the New Deal”, Piebalgs said.

Around 50 high-level delegations from all over the world, including aid groups and financial institutions, attended the talks on the new compact, which outlines the future priorities and challenges for the new Somali Government.

For the first time after nearly two decades of war, the fragile state of Somalia is on the road to recovery, but huge challenges remain ahead such as healthcare, access to water and education, employment. Terrorist attacks continue to be a stability threat, and human rights, in particular women’s rights, remain at risk, participants noted.

Speaking to Somali activist, Ifrah Ahmed, Somali President Hassan Sheikh Mohamud, said his Government “has a very clear policy on the issue of violence against women, on rape […] there are a lot of activities that the Government has taken to institutionalise the rights of women within the state building process”.

The European Commission also stressed the importance of pursuing the normalisation of the relations between Somalia and the international financial institutions. “In comparable situations the IFIs fund a considerable share of the costs involved in re-establishing basic services, economic regeneration and development. At this stage we do not have this tool in our toolbox”, Commissioner Piebalgs underlined.

The EU is the biggest donor to Somalia and has provided “more than €1.2 billion to support Somali people’s basic needs and to improve the country’s security” since 2008, Commission President, José Manuel Barroso said at a press conference with the Somali President yesterday.

The additional €650 million pledged by the Commission will help support a “new phase in the life of Somalia,” he went on. The EU will “remain heavily engaged in the stabilisation of the country” through the Common Security and Defence Policy (CSDP) missions, Barroso said, adding that Somalia “is not walking alone”.

The UK’s support will ensure 8,400 children are treated for malnutrition and 5,300 babies receive life-saving immunisations. The UK will also pledge new support to boost Somalia’s economic development by encouraging more investment and generating thousands of new jobs across the country.

As leaders meet at the New Deal for Somalia conference, Amnesty International  urged the EU to use its discussions with Somalia to highlight continuing human rights abuses in the country.

“The EU must press the Somali authorities to hold all perpetrators of human rights abuses to account. The EU also remains accountable itself for the use of EU funding in Somalia, said Nicolas Beger, Director of Amnesty International’s European Institutions Office.

“Conditions in Somalia for those who have been displaced remain dire. Large scale human rights abuses are occurring as people are being forcibly evicted from camps. Sexual violence is widespread and the inability and unwillingness of the Somali authorities to investigate and bring the attackers to justice contributes to a climate of impunity,” Beger added.

On 16 September 2013, the EU and Somalia jointly organised a high-level event entitled "A new deal for Somalia" in Brussels.

Somalia's eight-year transition ended in September 2012 with the peaceful handover to a new Federal Government. The conference aimed to sustain positive momentum in the country and to ensure that it stays on the path to stability and peace, bringing prosperity to its people.

The Compact is based on the New Deal principles agreed at the High-Level Forum for Aid Effectiveness in Busan in 2011. It will change the way the international community is working with Somalia and consists of: 1) sectoral top priorities following five peace and state building goals, 2) partnership principles and 3) implementation and monitoring arrangements.

0 responses to “EU: New Deal for Somalia is not ‘business as usual’”