The money will go to the UN World Health Organisation (WHO), Médecins Sans Frontières and the International Federation of the Red Cross and Red Crescent.

The Ebola outbreak is the largest of its kind ever recorded, according to the WHO.

The virus has spread to Sierra Leone and Liberia from south-eastern Guinea, from where the outbreak originates. A man is also believed to have died from the virus in Lagos, the most populated city in Nigeria.

More than 670 people have died from the virus and there have been 1,200 cases to date. About nine out of every ten Ebola victims dies from the virus, which is transmitted by wild animals or infected patients.

Fruit bats, which are commonly eaten in West Africa, are believed to be a carrier of the virus. 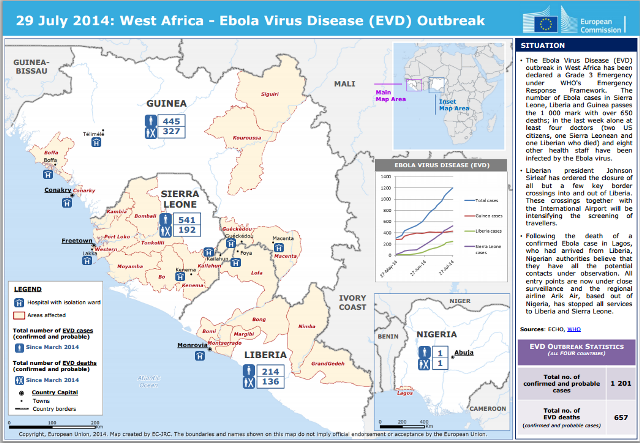 “The level of contamination on the ground is extremely worrying and we need to scale up our action before many more lives are lost,” Kristalina Georgieva, the European commissioner for humanitarian aid and crisis response.

“The EU itself has deployed experts to the affected countries to help assess the situation and coordinate with the authorities. But we need a sustained effort from the international community to help West Africa deal with this menace”.

Two US aid workers have been infected by the virus. Sierra Leone’s top Ebola doctor is also believed to have died from the illness. Authorities have been testing people returning from the countries where the Ebola is present.

The EU said that the risk of the virus spreading to Europe is currently low, as most of the cases are in remote areas and aid workers and authorities are encouraging people infected with Ebola or those who may have been near infected people or areas to remain isolated.

An EU medical official said that the virus did not spread easily through usual human activity or gatherings. People usually contract the disease through contact with the bodily fluids of those infected, whether human or animal.

Liberia has closed its borders and suspended the national football league to prevent the virus from spreading.