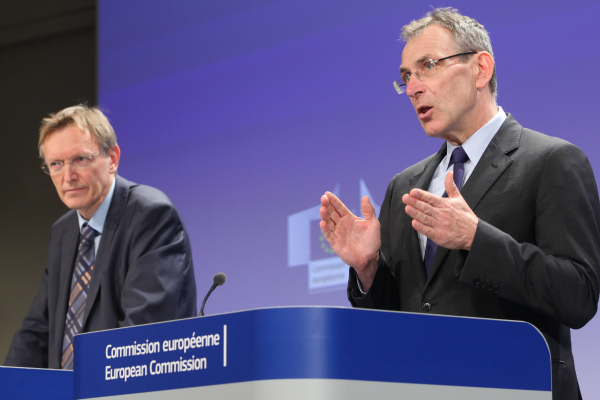 The European Commission on Wednesday (27 February) called for merging the fight against poverty and environmental protection into a single framework for the future, casting itself as the “role model” for the rest of the world.


The Commission’s ‘Decent life for all’ communication outlines proposed negotiating positions on the successor to the United Nations’ Millennium Development Goals (MDGs), the eight targets agreed in 2000 with many likely to miss their 2015 target.

The communication hinges on rallying the 27 EU member states to support a post-2015 development plan that commits to helping finance poverty reduction through sustainable growth, despite deep economic and financial troubles at home.

EU Development Commissioner Andris Piebalgs, called for a “new vision” to replace the MDGs, which were the “major tool” to combat poverty but have fallen short of their targets in many areas.

“It is finally recognised today that eradicating extreme poverty across the globe in a single generation is within reach,” Piebalgs said in announcing the communication, or set of recommendations, with Environment Commissioner Janez Poto?nik. “It is not only a question of whether all the resources to achieve these goals are available, but rather whether we have the political will to do so and the right international framework to guide it.”

The 20-page document sets no specific goals like those set out in the eight MDGs, opening the door to criticism that it is setting no measurable goals for its ambitions.

But Poto?nik said the document for the first time integrates human and sustainable development “which will likely present a role model for our international partners.”

The MDGs expire in 2015 and a successor framework will be forged at the UN level in the months ahead.

The proposals come eight months and a week after European leaders presented bold plans for a ‘green growth’ agenda at the UN Conference on Sustainable Development, but left without the firm commitments and compulsory targets they had hoped to achieve.

The Commission’s ‘Decent life’ plan says that reducing poverty will not happen unless action is taken to address climate change and depletion of natural resources.

The MDGs have been hailed for encouraging donors and national governments to invest in childhood health, hygiene, education, nutrition, safe drinking water and other milestones.

With fewer than two years to go, many goals are not likely to be achieved. UN figures show that 1.4 billion people – 20% of today’s world population – live in extreme poverty. More than 2.6 billion people do not have access to latrines and some 1 billion lack safe drinking water. Chronic hunger affects more than 800 million people, many of them in sub-Saharan Africa.

Meanwhile, with European troops on the ground in Mali, the Commission notes that some 1.5 billion people live in conflict areas.

A single EU voice at the UN

The Commission document is not just aimed at global negotiators. Commission officials said it was intended to spur EU governments to stick together in international talks on the post-2015 agenda.

European development ministers earlier this month agreed that the EU would speak with one voice in future international negotiations on new targets for sustainable growth and eradicating extreme poverty.

Joe Costello, the Irish trade and development minister, said on 12 February that “ensuring a unified EU position to the negotiations to agree a new global development framework” was a priority of his country’s presidency of the EU Council.

“Our aim is to eliminate extreme poverty within one generation. We believe we now have a historic opportunity to achieve this goal,” Costello said at a meeting of development ministers in Dublin.

EURACTIV asked Commissioner Andris Piebalgs to comment on how the Commission expects its promise to allocate 0.7% of gross national income (GNI) for development purposes by 2015 to be met. It currently allocation stands at 0.42% of GNI.

Piebalgs said that outcome of the budget negotiations is that the objective of 0.7% of GNI for 2015 stays for all the countries.

“If the UK, for example, reaches this maybe not this year, but next year, then other countries need to make more efforts. And I believe that it is crucial that all countries keep this drive; their promise to deliver. Because less development means more insecurity,” he said.

Piebalgs said that his expectation was that by 2015, “a lot of countries” would reach the target because the amounts required were “not such huge amounts.”

He said the European Commission handles about 18% of the total EU development aid, or €54 billion in 2011.

Asked if he was hopeful that the financial transaction tax (FTT) recently agreed by 11 EU countries could be a source of revenue for development aid, he said that it was a “good example” that France was taking this stance.

“It has not been proposed by the Commission that we will separate some part of tax for development purpose, but I would very much ask member countries really to take it seriously. It is a new source of finance and it could definitely, should be used not to close the gap, but close our unfulfilled promises. So that means that the financial transaction tax in my opinion is a very good source to fight what we have promised in support of poverty, or our climate change commitments.”

Funding could remain a challenge for the post-2015 UN anti-poverty framework.

The largest sources of development assistance, the EU, United States and Japan, are all under budgetary stress and poverty-fighting groups fear that foreign aid will be among the first casualties of long-term austerity measures.

The EU is collectively the largest aid donor, providing €53 billion from national governments and EU institutions – or 55% of the world total in 2011.

EU leaders agreed on 8 February to cut overall EU spending for 2014-2020 but reversed earlier plans for deep cuts in overseas development and humanitarian aid. The leaders called for spending €58.7 billion over the next seven years to help poorer nations, nearly the same as the previous budget. The figure must still be approved by the European Parliament.

0 responses to “EU sees itself as ‘role model’ for global environment, anti-poverty talks”