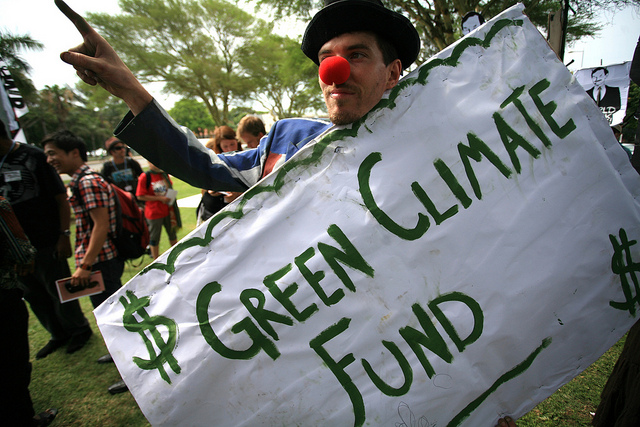 Protest to stop Green Climate Fund from becoming a 'Greedy Corporate Fund', 2011 [Friends of the Earth/Flickr]

The Green Climate Fund will be launched later this year, but India, China and, perhaps more surprisingly, the European Commission, will not contribute to its capitalisation. France promised to contribute, and called on its partners to do the same. EURACTIV France reports.

The capitalisation of the Green Climate Fund is under way, but without the EU. The first roundtable talks will be over by late 2014, but the European Commission will not be present. Due to governance issues, it has refused to contribute to the fund, which aims to help developing countries deal with climate change.

“The Commission will not take part directly in the capitalisation of the Green Climate Fund, because it will not sit on the fund’s management board,” a source close to Connie Hedegaard, Commissioner for Climate Action, told EURACTIV France.

The multilateral fund was established by the Copenhagen and Cancún agreements. It aims to centralise adaption funding and reduce emissions in developing countries. In order to fund this ambitious plan, numerous developed countries promised to donate over €100bn by 2020.

After years of planning, the first capitalisation of the fund is likely to happen before the end of 2014. The management board hopes to receive €15 billion in the first 3 years.

The European Commission is not the first major donor to refuse contributing to the fund. Fast growing economies like China and India have yet to confirm their participation because of a disagreement between Northern and Southern countries over the governance of the fund.

Both China and India could take part at a later stage. “They are not expected to take part in the first roundtable talks. However, one idea to entice these large emerging countries to participate in the Green Climate Fund is to put their contributions in a specific “South-South” fund with different governance,” said Alix Mazounie from Réseau Action Climat, a network of civil society groups campaigning against human interference with the global climate system.

France, the USA, Canada and Japan are among the largest donor countries. Numerous countries from the Southern hemisphere have also shown interest. “Mexico, South Africa and South Korea announced their intention to contribute to the Green Climate Fund,” said Alix Mazounie.

For the moment governments have only made vague promises. While France has promised to give to the fund, nothing has been revealed on the extent or technicalities of their contribution. “France will contribute and calls on its partners to do the same,” said the French government.

NGOs are expecting Paris to contribute €1bn over three years, an amount deemed “reasonable” by Mazounie.

Yet France’s capacity to mobilise €360m per year, in a context of steadily declining public development aid budgets, is no sure thing.

France’s contribution could come from innovative financing, like a tax on flights or financial transaction taxes (FTT).

There is a snag: FTTs have raised much less than expected. The French government initially estimated revenues of up to €1.6bn, but between August 2012 and August 2013, it only amounted to €700m and is forecasted to raise just €800m this year.

The government has tried to compensate for lower than expected tax revenue by increasing international solidarity tax from 10% to 15% between 2013 and 2014. “In its current state, FTTs will not be sufficient in order to reach the target of €1bn in 3 years, even if it was all assigned to the Green Climate Fund,” said Alexandre Naulot from Oxfam France.

The international agenda should prompt quicker decision making. The UN’s Climate Summit on 24 September 2014 will be a chance for donor countries to announce the extent of their contributions.

The French Ministry of Finance believes that the success of the Green Climate Fund could be the keystone to adopting an international climate change agreement in Paris.

An inter-ministerial council on the Paris Climate Change Conference should take place on 10 July in Paris to discuss the capitalisation of the Green Climate Fund. Several ministers should be present, including Laurent Fabius (foreign affairs), Ségolène Royal (environment) and Michel Sapin (finance).

The Copenhagen Accord, agreed at in the Danish capital in December 2009, included a pledge by developed countries to raise $100 billion per year by 2020 to help poor countries fight climate change and adapt to its consequences.

Meeting the following year in Cancún, the 190 nations involved in the UN talks made progress on the establishment of a Green Fund to deliver climate cash to developing countries. The fund will be governed by a board of 24 members, on which developed and developing countries will be equally represented.