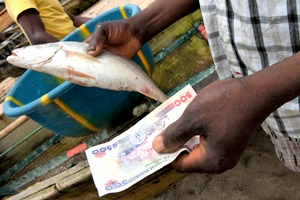 Europe maintained its position as the planet’s biggest aid donor last year, stumping up €55.2 billion of overseas assistance, but the bloc has made no progress towards its target of providing 0.7% of gross national income (GNI) in aid by 2015, a yearly audit says.

The European Commission’s 2013 annual development aid report, published on 21 August, highlights the “swift and decisive support” Europe has offered to victims of drought in the Sahel and conflict in Syria and Mali, in the form of overseas development aid (ODA).

The latest figures show that, at 0.43% of collective GNI, aid commitments by the EU and its member states have not increased since 2010, when they fell well short of an interim 0.56% target.

“We are only two or three years from deadline and the EU has still not even met its interim target for 2010 so they are really off-track,” Catherine Olier, a spokeswoman for the aid campaign group Oxfam told EURACTIV.

“It is all very well saying Europe is the world’s biggest donor but they are still not delivering on their promises,” she added.

Much of the annual report focuses on European initiatives such as the Agenda for Change and a communication on increasing resilience among the 870 million food vulnerable people.

The Agenda for Change is a strategic attempt to improve EU poverty-reduction efforts by:

The Commission has also rolled out funding for programmes such as the UN’s sustainable energy for all initiative, and the Scaling Up Nutrition movement, as well as providing support for work reviewing progress on the UN’s Millennium Development Goals.

“The EU has shown a strong commitment in developing the post-2015 sustainable development agenda,” Melanie Brooks, a spokeswoman for Care International told EURACTIV in emailed comments.

She added: “In order to renew its commitment and maintain its international role and to ensure the achievement of all Millennium Development Goals, the EU should guarantee adequate funding, with a special focus on gender equality and women’s empowerment in the next Multiannual Financial Framework 2014-2020 [the EU's seven-year budget], currently under discussion."

EU countries that were already at or above 0.7% ODA/ GNI pledged to sustain their efforts. The EU heads of state and government reaffirmed their commitment to reach the 0.7% target by 2015 at the European Council on 7/8 February 2013.