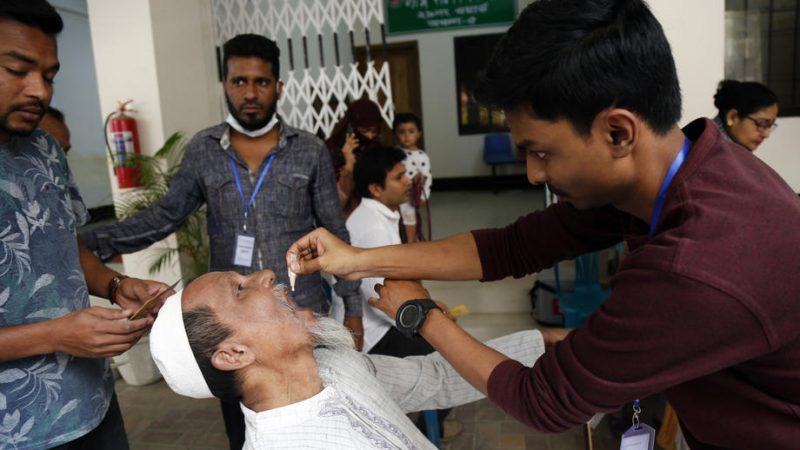 Leaders pledged more than $7.5 billion to finance the distribution of vaccines to combat infectious diseases in the world’s poorest countries over the next five years. at a UK-hosted Global Vaccine summit on Thursday (4 June). EPA-EFE/MONIRUL ALAM

Leaders pledged more than $7.5 billion to finance the distribution of vaccines to combat infectious diseases in the world’s poorest countries over the next five years at a UK-hosted Global Vaccine summit on Thursday (4 June).

The summit brought together 35 heads of state or government, as well as leaders of private sector organisations and civil society, against the backdrop of growing US isolationism in global health policy.

Launched by Bill Gates 20 years ago with a goal of shortening the time frame between the availability of vaccines in rich countries and poor countries, the Global Vaccine Alliance (Gavi) has reached 760 million children.

“Nobody is safe unless everybody is safe,” Seth Berkley of Gavi said ahead of the summit, while UK Prime Minister Boris Johnson called for the meeting to be “a moment when the world comes together to unite humanity in the fight against disease.”

The UK has pledged £1.65 billion between 2021 and 2025, while the European Commission pledged €300 million on Thursday towards the $7.4bn target. The United States has pledged $1.2bn over three years.

One of the side effects of the pandemic has been that routine immunisation services for other diseases have been hindered. The World Health Organisation, UN children’s agency Unicef and Gavi warned last month that supply chain disruption had affected around 80 million children under the age of one.

“We recognise that if we are not able to support building resilience into developing countries when something like COVID comes along, without foundational support for existing health innovations, we risk undermining those health services by focusing only on one problem,” said one UK government official.

Officials also say it is critical to ensure that a COVID-19 vaccine, once it becomes available, can be quickly transported across the world to the most vulnerable.

Of that money, more than €1.5 billion was pledged for Gavi, including €488 million for deploying, once available, a vaccine against COVID-19.

The plethora of summits aimed at financing a COVID-19 vaccine – a pledge summit organised by the celebrity-backed Global Citizen will be held on 27 June – had prompted some concerns by officials that this could lead to donor fatigue and confusion over where the money will go.

“We had been nervous about donor fatigue – because so much focus has been on COVID – but it’s absolutely clear that it hasn’t hindered funding for Gavi,” said a donor country official.

However, while most of the international community have backed the World Health Organisation’s governance arrangements, and co-ordinated plans to develop a vaccine – with the EU, UK, Japan and Canada all playing a leading role – the United States has distanced itself from the WHO and hinted that it may buy up vaccine supplies.

China moved quickly after US President Donald Trump confirmed his plans to withdraw the US from the World Health Organisation, offering African countries 30 million coronavirus test kits per month, as well as 10,000 ventilators and 80 million masks.

The move by Beijing is another unsubtle but probably effective action to make political and diplomatic capital out of the US abandoning any leadership role in response to the COVID-19 pandemic.

The Trump administration confirmed its withdrawal from the WHO after making a cack-handed and unsuccessful attempt to persuade African diplomats at the WHO to turn against Managing Director Tedros Adhanom Ghebreyesus, a former health minister of Ethiopia.