After the Lampedusa tragedy, several EU leaders have called for development aid to be targeted toward countries, mostly in Africa, which are a major source of illegal immigration. The European Commission admits that there is a link between giving aid and containing migratory flows, whilst insisting that the two tracks are completely separate.

Some EU countries have questioned the traditional way of providing development aid in their southern neighbourhood in the wake up of the Lampedusa tragedy, which saw hundreds of African migrants lose their lives last October trying to reach the small Italian island. 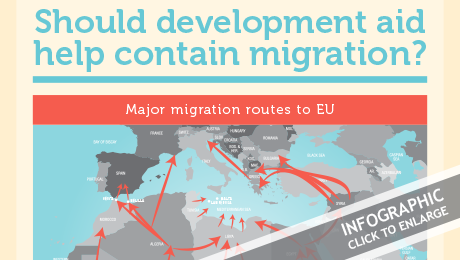 French President François Hollande said in October he would propose a policy based on the triptych “prevention, solidarity, protection”. France, he said, will advocate for better cooperation with countries of origin and a much more active euro-Mediterranean policy.

Speaking about the Lampedusa tragedy in the Italian Parliament, Prime Minister Enrico Letta said the EU response should include a re-launch of development policy cooperation, with a new national legal base to be adopted in 2014. Italy appears ready to focus its action on countries such as Ethiopia or Somalia, where it has historic ties and takes the view that other EU countries should do the same.

UK Prime Minister David Cameron spoke of the need to “invest” in countries “before they get broken” instead of dealing with immigration problems later or seeing new threats to national security.

The world has seen many 'failed states' becoming not only a source of migration, but of terrorism and piracy. The examples of Somalia, Sudan, Yemen, Afghanistan, Iraq, Libya, and more recently Mali and the Central African Republic all come to mind.

But the EU's response has been timid and France has largely taken the lead in Mali and the Central African Republic to prevent a situation of lawlessness which could end up contaminating a much larger geographic area.

Including cost of asylum seekers in ODA?

Concord, an NGO confederation for relief and development, has rung the alarm bell after discovering that some EU countries had reported inflated figures on official development assistance (ODA), by including the cost of receiving refugees on their territory. But as it turns out, the practice is not illegal.

In 2012, refugee costs represented approximately €1.3 billion of European aid, according to Concord. The largest absolute refugee costs were recorded in Sweden (€400 million), France (€320 million), the Netherlands (€254 million) and Denmark (€103 million).

What is the aim of development aid?

But the Commission insists that the aim of EU’s development aid is not to contain migration, but rather to promote good governance, human and economic development and tackle universal issues, such as fighting hunger and preserving natural resources. It also aims at achieving to the maximum extent possible the United Nations Millennium Development Goals (MDGs), in which there is no mention of migration.

The EU is the world’s leading donor when it comes both to development aid and migration. But it takes the view that these two tracks are separate. In the Commission, migration and development aid are overseen by two different directorates and commissioners.

Alexandre Polack, spokesperson for Development Aid Commissioner Andris Piebalgs, told EURACTIV that one aspect of the EU’s development assistance is to support developing countries in meeting their obligations to respect the human rights of migrants and managing migration in line with their development objectives.

Polack said the EU had committed almost €1 billion to more than 400 projects focused on migration between 2004 and 2012 worldwide. The majority of these projects deals with improving migration management in ?U’s partner countries, which Polack says will remain a priority in the future.

On the financial level, the Commission’s main long-term development instrument to address migration issues in the EU’s partner countries is the Thematic Programme for Migration and Asylum. It has had a budget of €384 million for the period 2007-2013.

Since 2001, the EU has implemented more than 250 migration and asylum related activities in partner countries in the Middle East and Africa for an amount of more than €500 million.

As examples, the Commission has funded Regional Protection Programme in the Horn of Africa; it has co-financed projects with the International Organization for Migration for better protection of vulnerable and trafficked migrant children; it has supported government such as in Mauritania on developing their migration policy.

The figures of EU funds spent strictly on migration look modest compared to the budget of development projects. Only on food security the EU provides to developing countries around €1 billion each year, not counting emergency food aid. In 2012 alone, €1.6 billion was made available to build resilience and improve sustainable agricultural development. The EU Food Facility provided €1 billion over three years (2009-2011) to improve agricultural productivity and food supply in 49 most affected countries.

And EU education assistance amounted to €4.2 billion between 2007 and 2013, €2.9 billion for basic and €1.3 billion for higher education programmes. In the field of improving basic health, only in Afghanistan the EU has committed €341 million since 2001.

The Commission has provided EURACTIV with a list of projects in Africa that have helped to improve the daily lives of beneficiaries. Intrinsically, these projects are also believed to have contributed to decreasing immigration pressure from these countries on the European continent (see infographic).

On 3 October a boat carrying migrants from Libya to Italy sank off the Italian island of Lampedusa. It was reported that the boat had sailed from Misrata, Libya, but that many of the migrants were originally from Eritrea, Somalia and Ghana.

An emergency response involving the Italian Coast Guard resulted in the rescue of 155 survivors. On 12 October it was reported that more than 350 people died in the shipwreck.

The Lampedusa tragedy illustrated once more that the EU lacks a real immigration policy and has no strategy on how to deal with 'more Lampedusas'.