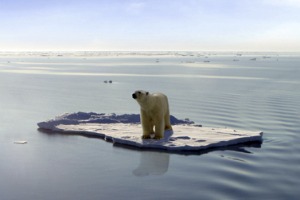 The EU cannot use the economic slowdown as an excuse to delay action on fighting climate change, the bloc's first-ever chief scientific advisor has warned.

Molecular biologist Anne Glover took on the newly created role reporting to the European Commission’s President José Manuel Barroso at the start of this year, having previously served as chief scientific advisor to Scotland's devolved government.

“It has been extremely disappointing to see many member states cut back on their emission reduction efforts because they say 'we're going through a recession',” she said.

“Make no mistake, if we had unabated man-made climate change, we would go through an absolutely horrible period of conflict and migration, until the world's population started diminishing very rapidly.”

As Europe's leaders begin to switch their focus from spending cuts to boosting growth, constraints on natural resources also mean that governments cannot just spend their way out of recessions as in the past.

“The simplest way to think about increasing jobs is to make more stuff and get people to buy more stuff. But my point is that we can't do that, because we're running out of resources,” Glover said.

She pointed to estimates from scientists and campaigners that if EU consumption patterns were adopted globally, the equivalent of almost three planets would be needed to keep pace with the current rates of resource depletion.

“We have to think about alternative ways of using science, engineering and technology to live on the planet,” she said. “I think it's the biggest challenge for humans.”

Glover sees her appointment, which followed a 2009 pledge by Barroso to improve the way the EU gathers and uses scientific advice, as a positive step.

“If you look at President Barroso's advisors, currently most of them are economists, and that is understandable. But now he has a scientist there too, which was something he decided, and I think that is very healthy.”

Various industry sectors in Europe are currently lobbying against EU policy on emissions and other measures to combat climate change policies, from airlines and shipping companies to energy utilities and aluminium producers.

“Industry is often trying to buy time, that's why they prevaricate, and you can understand that for commercial reasons,” Glover said. “But they're also setting back their ability to profit first from the opportunity, by only thinking about what they're protecting.”

She gave the example of Europe's car industry, where tough negotiations are expected to begin later this year on setting 2020 emission targets for passenger vehicles.

“If we take the automotive industries, if you ask people ‘do you think you'll have a car that runs on diesel or petrol in 2020 or 2030?’, the overwhelming answer is ‘no’. All of the citizens of Europe think that their cars will be running on some eco-fuel that won't be polluting the environment.”

“That should be a big wake-up for the automotive industry, thinking ‘our consumer wants something quite different in 10 or 15 years' time, so how are we going to deliver it?’ The Commission could be thinking how to support innovative thinking in these areas.”

The world has directed its efforts to fight climate change at reducing carbon dioxide emissions. But scientists have warned that methane, 20 times more potent a greenhouse gas, is already seeping from the warming Arctic seabed and thawing permafrost in Siberia and Alaska, and could lead to runaway climate change.

Researchers have also started to draw attention to the climate warming potential of black carbon, a component of soot, which absorbs radiation and causes glaciers to melt when the black dust settles on white snow and ice.

Asia has been identified the biggest source of the pollutant due to the burning of wood, dung and coal in cooking and heating stoves, burning fossil fuels in the industrial sector and using diesel fuel in cars, the use of which is increasing. By contrast, black carbon emissions have been decreasing in developed countries.