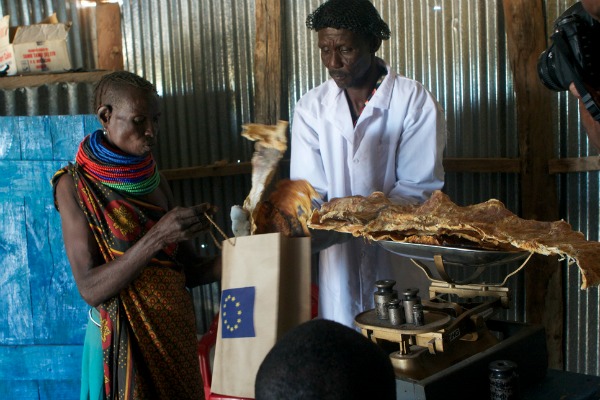 SPECIAL REPORT / Learning from past crises, the European Commission has changed tack on its approach to food security in the Horn of Africa, focusing on resilience to droughts and supporting diversification in local farming production.

The list of hunger catastrophes in the history of the Horn of Africa is long. The latest one, only two years ago, was triggered by an extreme drought. Such extreme weather events are only expected to become more frequent with climate change, making preparedness more crucial than ever.

Anticipating those changes, the EU is trying to help affected countries deal with emergency situations. Last October, the European Commission sent an additional €50 million in aid to the southern and eastern regions of Ethiopia as part of its Supporting Horn of Africa Resilience (SHARE) programme.

The plan, presented jointly by EU Development Commissioner Andris Piebalgs and EU Commissioner for Humanitarian Aid Kristalina Georgieva, was intended to strengthen the region’s resilience against a range of potential external shocks.

In the event of a hunger catastrophe for instance, the neediest in the population should receive financial aid and food more quickly. And in the longer term, food security can be improved by promoting dietary diversification and supporting local production of vegetables, milk and animal feed.

"With this new programme, we will be helping Ethiopian people in the longer-term; providing support to help them rebuild their lives, make a living, and make sure they are well equipped to deal with droughts that will inevitably come again in the future," explained Andris Piebalgs.

Millions in aid for Ethiopian resilience

Assistance measures, financed by the EU, will be carried out by various international organisations, including UNICEF, the UN's Food and Agriculture Organization (FAO) and the World Bank.

Concrete projects still need to be selected but a substantial portion of the EU aid money is expected to flow into the country’s Productive Safety Net Programme (PSNP), according to an Ethiopia expert at the European Commission’s development and cooperation directorate (DG Devco).

Focusing on the long term

"We want to strengthen Ethiopia from the ground up," the Commission official told euractiv.de. "Not only that, but ultimately, European taxpayers should also gain. It is much cheaper to work with a well-operating system than to have a massive humanitarian response after every crisis."

It will be several years before the resilience projects finally produce results. Still, African governments taking part in the SHARE regional programme are constructively cooperating with the EU, the official said, with several already developing strategies for containing the effects of future crises following the 2011 drought.

"Two years ago, they took on the responsibility and we are reminding them of their promise," the official said.

The resilience projects at the Horn of Africa are only part of the latest reorientation of European development aid. The underlying goal is to keep negative consequences of natural disasters to a minimum, a change of course made inevitable by global warming.

"Resilience is a new concept. But we want to give the approach more force,” explained another official at the Commission's DG Devco. “We observe structural explanations for crisis-susceptibility and fragility in certain developing countries. We link development cooperation and humanitarian aid together to make vulnerable population groups more crisis-resilient in the long-term."

In 2012, the Commission drafted a ten-point plan and a complementary action plan giving higher priority to resilience in development aid. EU countries already expressed their support and the Commission also expects the Parliament to back the plan soon.

In its initiative, the Commission explicitly mentions existing projects aimed at resilience in the Horn of Africa (SHARE) and in the Sahel region (AGIR). If successful, the approach could be rolled out to other regions.

Development aid organisations are also encouraging donor countries to observe their development cooperation from a "resilience perspective" and to orient their plans accordingly.

The topic was the focus of this year's Global Hunger Index (GHI), authored by the German World Hunger Relief Agency (Welthungerhilfe), the International Food Policy Research Institute (IFPRI) and the NGO Concern Worldwide.

"In the wake of a catastrophe, the poorest of the poor are most likely to suffer a downward spiral,” said Bärbel Dieckmann, the president of Welthungerhilfe. “Those who earn less than two dollars per day cannot afford illness in the family or the loss of a harvest. Thus, tediously earned progress is obliterated because people have no resources to react to new challenges.”