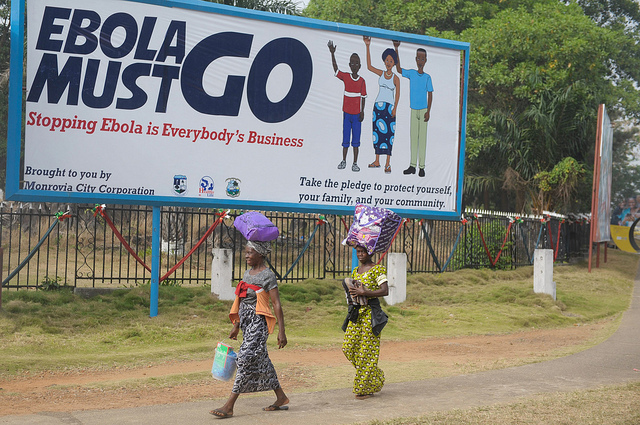 Two women walk in front of a billboard, which says "Ebola must go. Stopping Ebola is Everybody's Business" in Monrovia, Liberia. January 2015. [UNMEER/Flickr]

This situation has been known and deplored by medicines campaigners for many years. Ebola has always been a disease of the poor in Africa. Other such diseases that kill and harm many more thousands also have no treatments or the drugs that exist are inadequate. They include sleeping sickness, leishmaniasis, elephantiasis and river blindness. Malaria, too, is neglected, because the drugs to treat it invariably run out of potency within a number of years.

But it is not just a developing world issue. This affects everybody. Antibiotics are losing their power in the face of microbial resistance. Doomsday scenarios are now regularly painted. We could reach a situation where transplants are not possible and even general surgery is potentially lethal because of the dangers of infection.

So a group of experts is now calling for a global fund to be established, worth at least $10 billion, to pay for the research and development of such drugs. The market has failed to produce what the world needs. Ahead of the World Health Assembly which opens in Geneva on Monday, they are putting the case for special measures in a paper in the open-access journal PLoS Medicine.

The authors include campaigners Bernard Pe?coul of the Drugs for Neglected Diseases initiative in Geneva and Manica Balasegaram of Médecins Sans Frontières’ access campaign, but also Christian Bre?chot from the Institut Pasteur, Yves Le?vy of INSERM in Paris, Jeremy Farrar who heads the Wellcome Trust and David Heymann of the Centre of Global Health Security at Chatham House in London. Other signatories are leading lights in China, India, South Africa, Norway and the USA. This is Pe?coul:

Over a year into the crisis in West Africa, therapeutics and vaccines for Ebola remain experimental, the pipeline for new antibiotics is dry, and many diagnostics, treatments, and vaccines for a range of other neglected diseases are archaic, unaffordable, or non-existent. Various initiatives to tackle these gaps are being discussed but there is a risk that this will further fragment efforts to accelerate R&D for desperately needed new health technologies. A coordinated approach is crucial.

They propose that this fund would have a strong link with an inter-governmental agency like the WHO. Whether it would sit within the UN system would depend on the post-Ebola reform process that the WHO is expected to go through.

“The mechanism would need to be essentially publicly financed and owned and overseen by governments, but private and philanthropic actors and civil society should be involved as stakeholders. Good governance to ensure oversight and transparency and an effective, professional, and suitably competent secretariat will be essential,” says the paper.

The events of 2014 have shown that crisis management is more risky and costly, and less effective, than a prepared health system,” it continues. And if a strong R&D mechanism had been in place, “innovative vaccines and therapeutics could have been ready for testing earlier on in the Ebola outbreak in West Africa.

“The need for change must be a call to action to mobilize countries to take collec- tive action. We believe that such a move that transcends state and corporate interests would result in a win-win scenario for all – rich and poor populations, and public and private sectors alike.”

The devastating loss of human life from the Ebola outbreak of 2014 must not be in vain.

0 responses to “Experts call for global research fund for antibiotics, Ebola and other neglected diseases”