The EU announced on Friday (17 March) a further €165m for drought-stricken parts of eastern Africa, during a visit by Foreign Affairs chief Federica Mogherini and Commissioner Neven Mimica to Addis Ababa, the continent’s diplomatic capital.

The cash will be divided between South Sudan – described by Mimica last month as a “man-made crisis” – and the Horn of Africa countries hit by drought; Somalia, Ethiopia, plus Kenya.

Commissioner Mimica said: “The sooner we act, the more lives we can save. This package of €165m will support the urgent needs of South Sudanese people in the country and the region but also the millions of people at risk of famine in the Horn of Africa. With this additional support, the EU shows the way to other members of the international community to also respond urgently.”

Breaking down the new support, some €100m goes to South Sudan, the world’s youngest country, embroiled in civil war and famine.

The second part of the package, €65m, is for the ongoing serious droughts in Somalia, Ethiopia and Kenya.

Christos Stylianides, the European Commissioner for Humanitarian Aid and Crisis Management, with Mimica and Mogherini, said: “With this new assistance, we will do our utmost to contain the effects of these extremely challenging circumstances in the Horn of Africa.”

The trio of the EU’s most senior officials dealing with Africa were in the Ethiopian capital for a meeting of the African Union – ahead of a major EU-Africa summit planned for November.

The aid for South Sudan breaks down as €30m for vulnerable people in the new state, particularly women and children, and the remaining €70m for South Sudanese refugees who have fled to neighbouring countries, primarily Ethiopia, Uganda, Kenya and Sudan.

The €65m for Horn of Africa countries follows three years of failed rains – partly blamed on the El Nino effect – which have again left severe droughts in Somalia, Ethiopia and Kenya.

Rainfalls for the coming rainy season in 2017 is again predicted to be below average, exacerbating the crisis.

In Somalia, some 6.3m people are in dire need of emergency food rations, with a pre-famine alert already issued.

Britain’s Foreign Secretary, Boris Johnson, was himself in both Somalia and Ethiopia this week, tweeting about UK aid efforts.

In total some €400m was allocated by the EU – already the world’s largest aid donor – to combat the affects of El Nino in the Horn of Africa and east Africa.

In February, the EU approved a further €200m for the new government in Mogadishu, as the formerly failed state tries to transition into some form of resilience.

Before setting off for Africa, Mogherini held an informal meeting of overseas aid ministers in Brussels on Thursday – which included a first meeting with the new President of The Gambia, Adama Barrow. 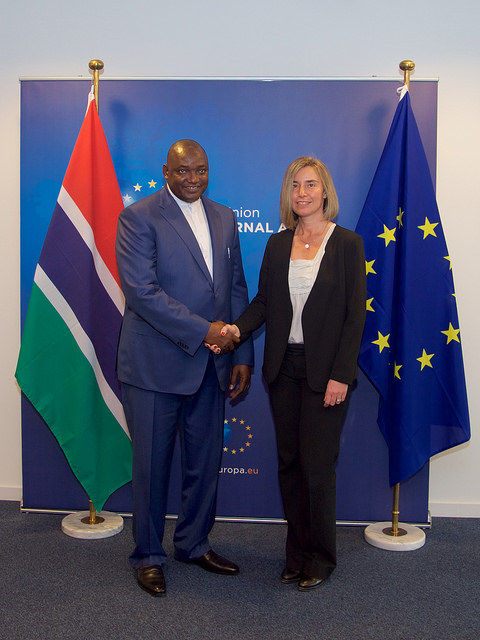 Barrow won an initially disputed election in December 2016, and this was hist first visit to Brussels. There was, eventually, a peaceful transition of power, with Mogherini hailing a “new chapter” in EU-Gambia relations, and welcomed Barrow’s decision to reverse his predecessor’s withdrawal from the International Criminal Court in the Hague.

The EU-Africa summit in November will largely concentrate on the EU’s ‘New Consensus’ on Development.