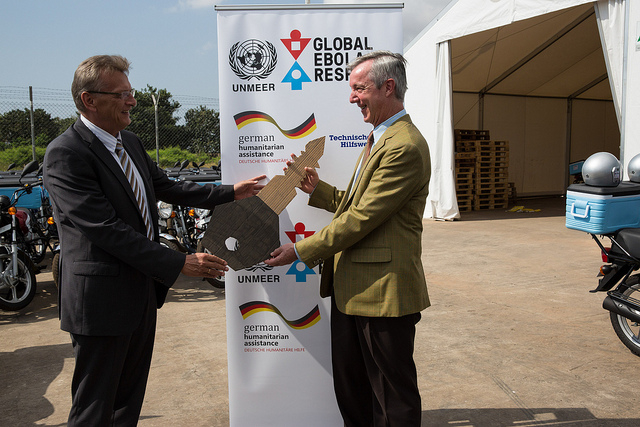 This article is part of our special report Fighting diseases: The challenges ahead.

SPECIAL REPORT: In the fight against global diseases, the European Union is expected to take a collective approach. Germany’s Foreign Minister Frank-Walter Steinmeier is currently planning a highly-specialised task force to combat epidemics like Ebola. He has also set aside the Medevac plane “Robert Koch” for the mission.

Indecisive, chaotic, sluggish – the European response to the Ebola outbreak in West Africa came too late and the aid engine stuttered. This criticism is shared by NGOs and European politicians as well as the German government.

As a result, Foreign Minister Frank-Walter Steinmeier initiated talks over assembling a nimble, rapid-response unit to deal with future epidemic outbreaks. This broad outline of an idea has now become a concrete plan. “In the context of the experiences gathered during the Ebola epidemic, the EU and its member states are working on an initiative to assemble a pool of medical and logistical experts with crisis experience – so-called white helmets,” the Foreign Ministry commented, speaking with EURACTIV Germany.

“The pool is intended to make it possible for EU member states to effectively react in the future through joint, coordinated and rapid action and, especially, to keep the timespan between a disease outbreak and deployment of experts as short as possible,” the Ministry said.

As a token of goodwill, the German government is throwing its Medevac plane “Robert Koch” into the ring. The modified Lufthansa Airbus is an internationally unique, flying, special isolation ward. It can treat and safely transport sick patients at any stage of the disease. EU partners are intended to have access to the Medevac for future white helmet operations. “In this way, we are making a concrete contribution towards implementing our initiative”,” the Foreign Ministry indicated.

The white helmet initiative is planned to be carried out within the framework of EU Civil Protection Mechanism. Coordination of operations would be taken on by the Monitoring and Information Centre (MIC), located in the DG Environment of the European Commission. A total of 31 countries are expected to participate in the plan – the 28 EU member states, Iceland, Liechtenstein and Norway. They will provide the experts, equipment, transport vehicles or intervention modules, the Ministry explained.

Foreign Ministers from other EU member states support Steinmeier’s plan. In the conclusions of the Council of Ministers from 17 November 2014, the Foreign Ministers articulate their intention to initiate these concrete tasks together with the European Commission as soon as “the acute phase of the crisis” has been overcome.

Tankred Stöbe, Director of Medecins Sans Frontieres (MSF) in Germany, finds the term ‘white helmet force’ not adequate. In his view, there are enough public and private organisations to be considered in the fight against epidemics. “I doubt that a new supranational unit can perform humanitarian aid better, faster and more efficient”, Stöbe said to EURACTIV Germany.

MSF: Training must be improved

The Ebola-Crises have showed that on all levels there are not enough experts to fight highly infectious and risky epidemics in developing countries, said Stöbe. In the futures intergouvernmental training concepts must be put in place. National governments should show solidarity and must take over responsibility.

Public health professor Olaf Müller welcomes the German government’s initiative. At the same time he warns that developing countries should be equipped with the capability to defend themselves against epidemic outbreaks. “These countries need an electronic, internet-based early-warning-system. All information regarding epidemic cases, even from the most distant regions, must be directly collected in a central location,” Müller emphasised, in a statement for EURACTIV Germany. The EU must provide appropriate training for local people because these systems are complicated, he said. In Ghana, such a “surveillance system” is already functioning well, Müller pointed out.

Müller also indicated that white helmet troops should receive training in anthropology.  “It is important to analyse the cultures of the countries in which one hopes to help,” Müller explained. The biomedical view of the West is not widespread in African countries, he indicated, particularly in rural regions. The emergence of disease is often attributed to wrongdoing or magic in the population, the University of Heidelberg health expert said.

“Take Burkina Faso as an example. For milder forms of the disease, the sick often seek out healers but also Western-style physicians. With severe forms of cerebral malaria, when cramps can develop, this image changes. At that point many people assume the symptoms are caused by a bird flying over the village at night and bringing cramps upon them. In a case such as this they almost exclusively turn to traditional healers,” Müller explained. “Western volunteers have to approach the traditional healers and religious leaders.”

More than €1 billion was pledged by member states and the European Commission to fight the Ebola crisis. The Council has appointed Humanitarian Aid Commissioner Christos Stylianides as the EU Ebola Coordinator.

Mobile laboratories, humanitarian experts, and specialists in dangerous infectious diseases have been deployed to the region.

The €280 million call for proposals, launched by Commission and the European pharmaceutical industry, is under the Innovative Medicines Initiative (IMI).