Hardly any country in the world hosts as many companies accused of severe human rights violations as Germany, according to a recent survey by the University of Maastricht. EURACTIV Germany reports.

Of 1,800 human rights violations analysed by the University of Maastricht, 87 can be traced to German companies.

This places Germany in fifth position, according to the number of such cases, behind the United States (511 cases reported), the United Kingdom (198), Canada (110) and China (94).

The list of potential human rights violations is long and includes cases such as water pollution in Peru, due to copper mining for car manufacturing, land expulsions in Uganda for a coffee plantation, villages flooded by a dam in Sudan, and exploitation of workers in the apparel industry.

In all of these cases, German companies were involved either directly or indirectly, according to complaints from NGOs, which were recently backed up by the University of Maastricht’s global comparative study. 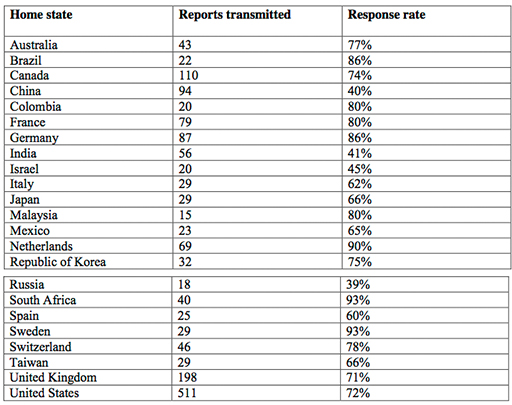 In Germany, imports of primary raw materials for the automobile and chemicals industry faces the most criticism from civil society.

Production in these sectors takes place under “conditions that are problematic for human rights”, says a recent study from the German NGOs Germanwatch and Misereor.

Furthermore, such cases are often found in countries with weak government structures and a high susceptibility to corruption, the study indicates.

In Guinea, for example, the report indicates that forcible land-grabbing took place for bauxite mining. Residents were cut-off from rivers while blasting in quarries shook and damaged homes, the report says.

Water and soil samples in the vicinity of Peruvian copper mines indicated excessively high levels of copper, lead, arsenic and mercury, which are harmful to humans and animals.

But whether and to what extent the raw materials from a certain problematic mine actually end up in cars manufactured by BMW, Daimler or VW, the study says, cannot usually be proven. This is due to complex supply chains and a lack of transparency among the companies, the authors write.

So far, German companies have not been subject to any binding regulations in this regard.

“The German government and parliament continue to depend exclusively on voluntary measures among the companies,” criticised Klaus Milke, chairman of the board at Germanwatch.

“Still, previous experiences show voluntary measures set by forerunners are important but they do not prevent irresponsible behaviour among black sheep. Here, preventative incentives and requirements are needed so that all companies fulfill their duty to protect human rights,” Milke explained.

National action plan as a basis for legal regulation

Meanwhile, the German government is aware of the problem.

Since the end of 2014, it has been developing a national action plan titled “Business and Human Rights”, in coordination with the Foreign Office and with involvement from civil society and economic associations.

On Wednesday (6 May), the government is expected to present its first preliminary results to the public.

The UN Guiding Principles on Business and Human Rights serve as a basis for the action plan.

According to its own statements, the German government hopes to make “a contribution to the implementation of these guiding principles”.

“Not only governments, but also businesses, are responsible for human rights in their global activities. What is beneficial to individuals should not be harmful to all the others,” Frank-Walter Steinmeier said when the action plan’s drafting process was launched.

Though the measure was passed by the United Nations in 2011, the previous German government refused to implement the process.

But the human rights issue is significant to the German economy. Of the 30 German DAX businesses, seven have adopted their own mission statement on human rights.

Seven other companies have a social charta for their business which also touches on essential human rights issues, a business survey by Misereor and Germanwatch shows.

90% said they have a complaint mechanism in place, such as a compliance hotline or an ombudsperson.

But NGOs argue this is not enough, saying measures should be formulated more strictly and that politicians should adopt binding regulations.

Here, they refer to France, where a few weeks ago the national assembly voted to require big businesses located there to conduct due diligence assessments for human rights and the environment.

Violations of the obligation to take such precautions are planned to be punishable with fines of up to €10 million or civil liability.

But in Germany, it will take years before a regulation could be passed. The federal cabinet plans to sign off on the action plan in mid-2016.

Since their endorsement in 2011, the United Nations Guiding Principles on Business and Human Rights (UNGPs) have been a global standard for preventing and addressing violations of human rights indirectly or directly caused by business activities. They are the UN's first initiative on corporate responsibility regarding human rights issues.

The UNGPs are comprised of three pillars: